We woke up early in order to be at the hospital at 8am. We stopped by the kitchen to say hi to Ricky.  We were so excited to see him, even if it was only for a few minutes.  I was bummed that I didn't get a photo.  We will see a lot more of him in December. 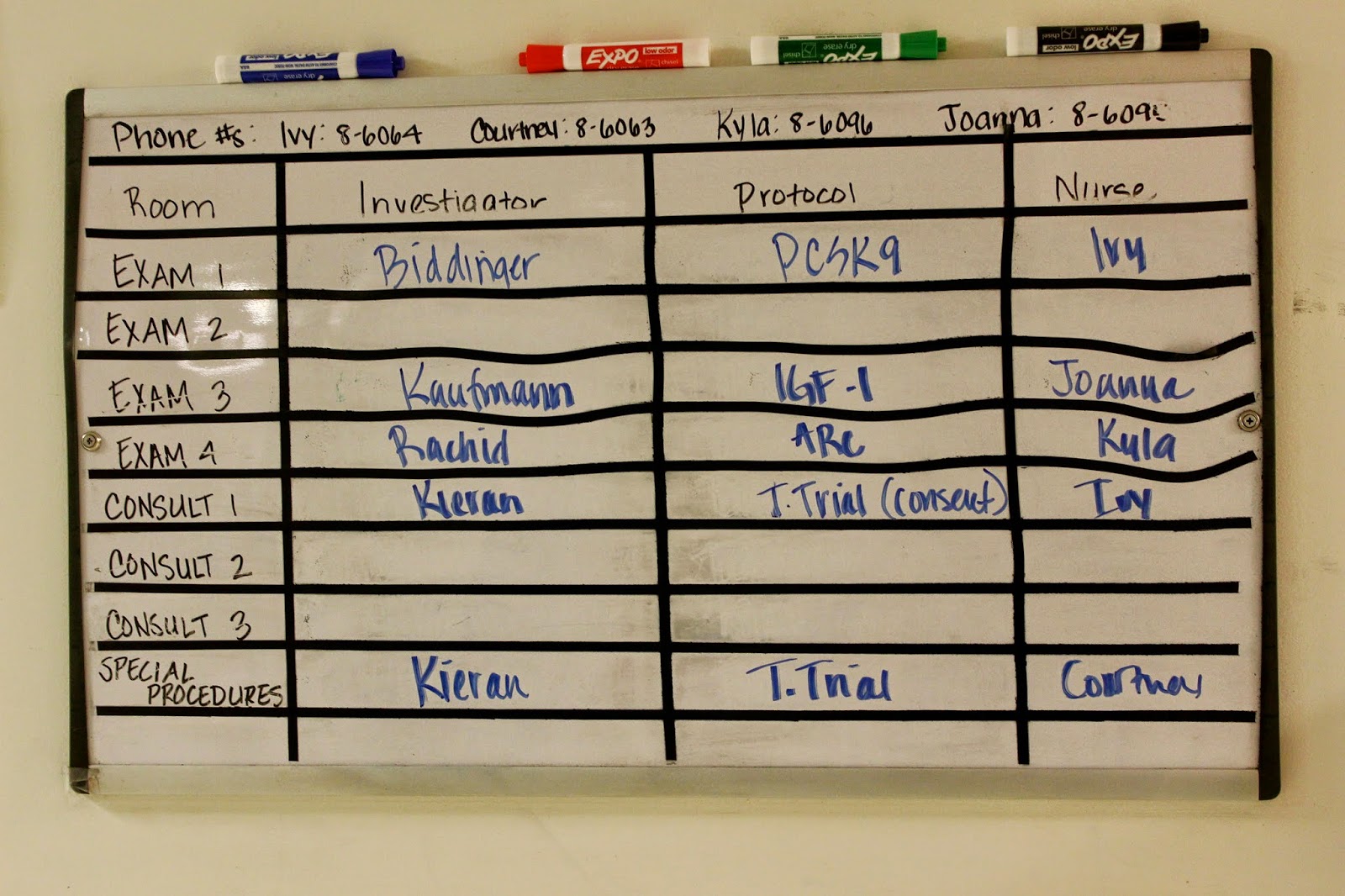 We took the CT2 bus to the hospital.  Nurse Joanna took measurements and vitals.  This was the easiest blood draw Cammy had ever had.  She even smiled during it.  She had to fast for the blood draw so she was so excited to eat waffles after the blood was taken. 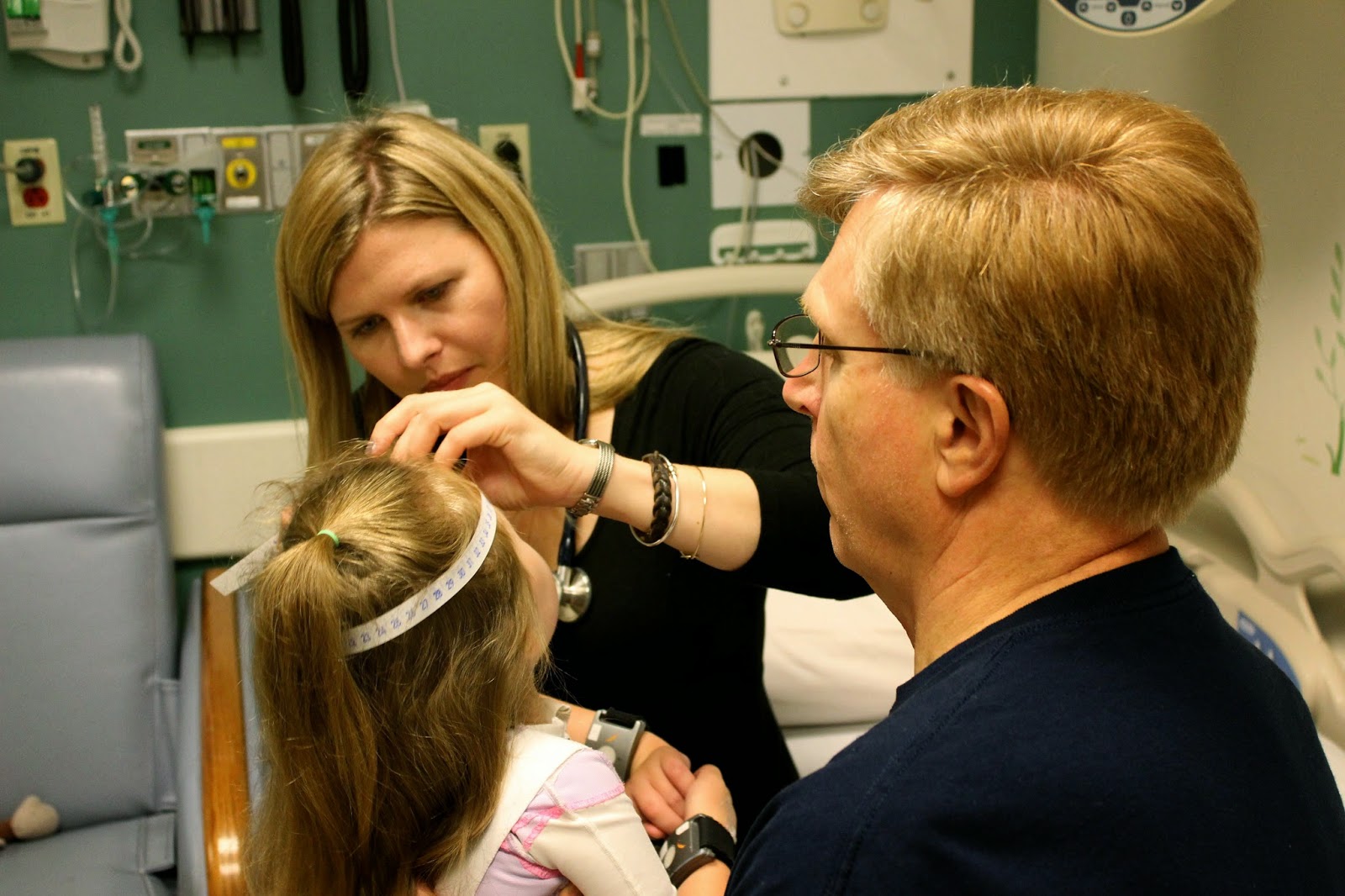 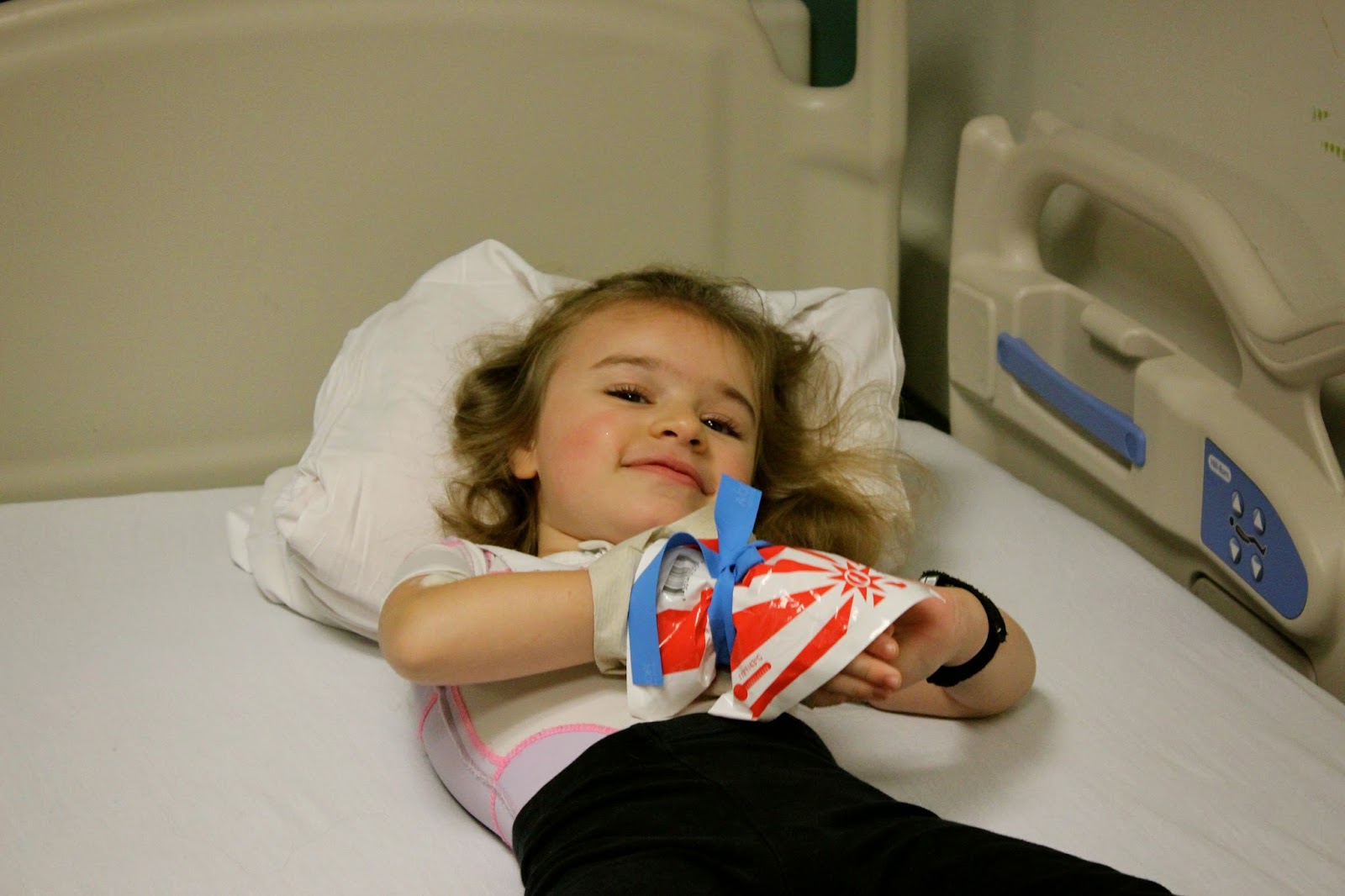 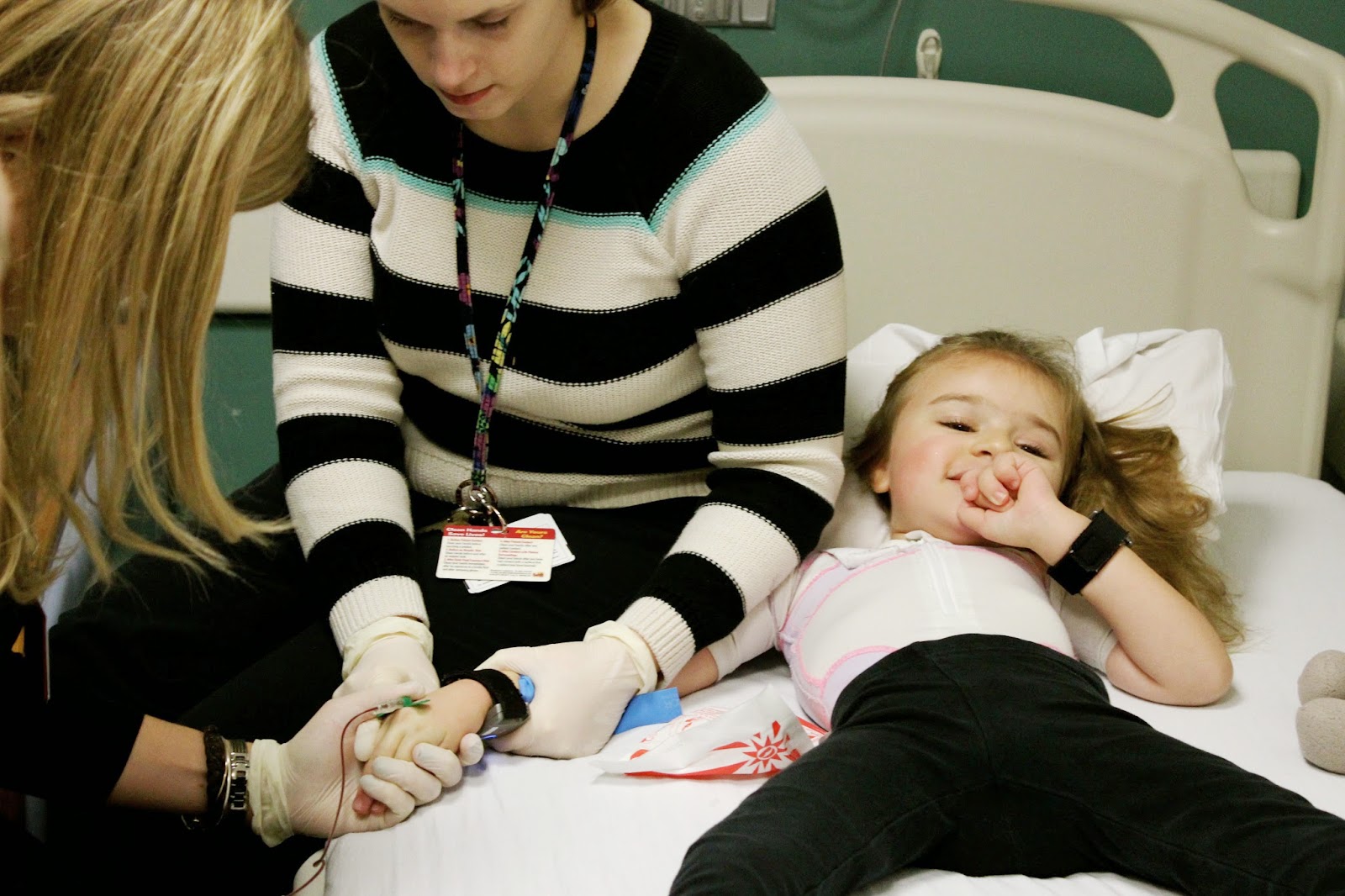 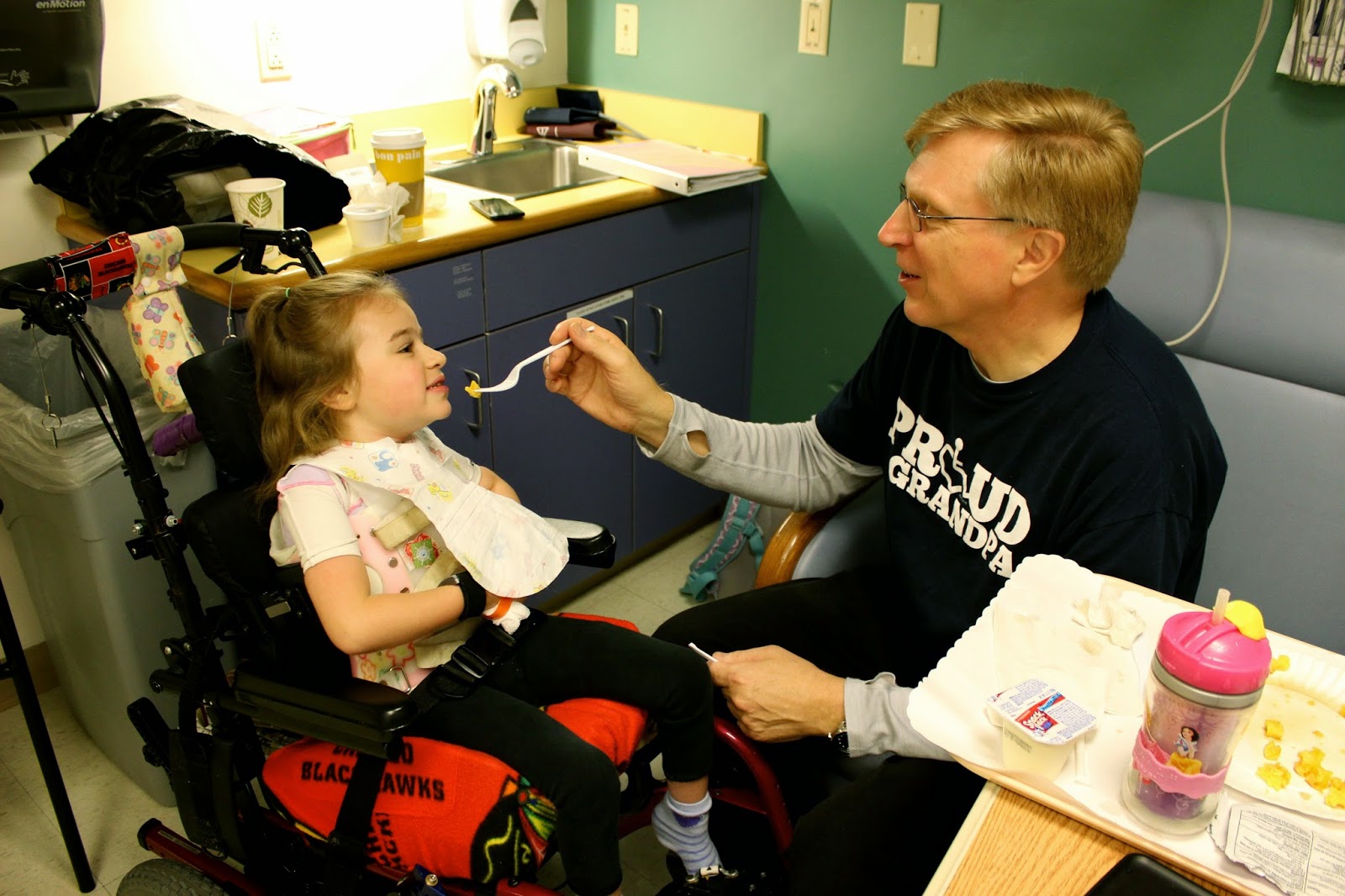 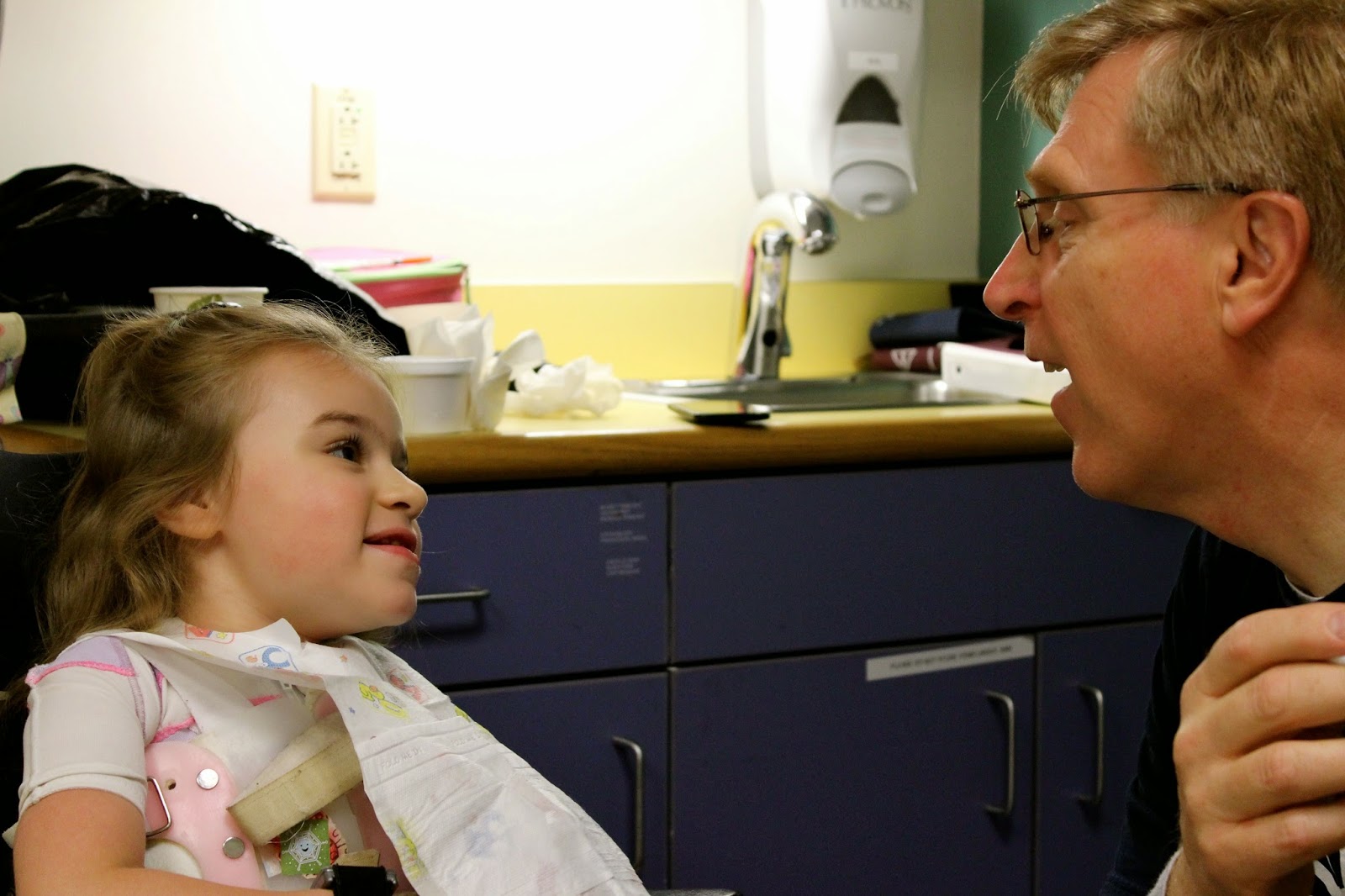 Dr. Kaufmann came in.  Cammy was all smiles when she saw him.  We like to call him "Uncle Wally" or "Senior Wally."  It always makes Cammy giggle hearing those.  Cammy and Dr. Kaufmann have been a cute team for over 2.5 years now.  Ms. Suzanne was with Dr. Kaufmann, along with a resident, learning more about Rett.

Dr. Kaufman did his usual routine check ups.  Natalie was even able to take our information for the NHS study, 6 month checkpoint.  Dr. Kaufmann gave us updates on the trial, good news about more people interested in this IGF-1 trial and answered all of Grandpa B's questions.  I think Dr. K and Grandpa B could have chatted all day.  It was pretty cute, but I had to cut them off.

We received our new vials and gave Cammy a shot with her new dosage.  She gained a little weight (HOORAY), so her dosage increased.  We had to wait around another 30 minute after the shot to check her blood sugar levels.  Everything was normal, so we said our goodbyes.

We took the bus back to the hotel, ate some lunch and checked out.  We hopped into a cab and headed to the airport.

The airport seemed so quiet compared to O'hare or even Midway.  Everyone was just as nice in this airport as they were at Midway.  At security, a wonderful man with a thick Boston accent appeared to be a tough guy, but melted with Cammy.  He was so gentle and kind to her.  He shared with us that his wife had MS.  Everyone has a story. We gave him a bunch of Cammy Can tattoos for his grandkids. We took a TSA customer service form to fill out because we were so impressed with how well we were treated.  I have a feeling those guys don't get many positive comments.  We were happy to fill it out and they were happy to see our comments.


While waiting for a pre-board, Cammy was happy as can be snacking on popcorn and listening to music. 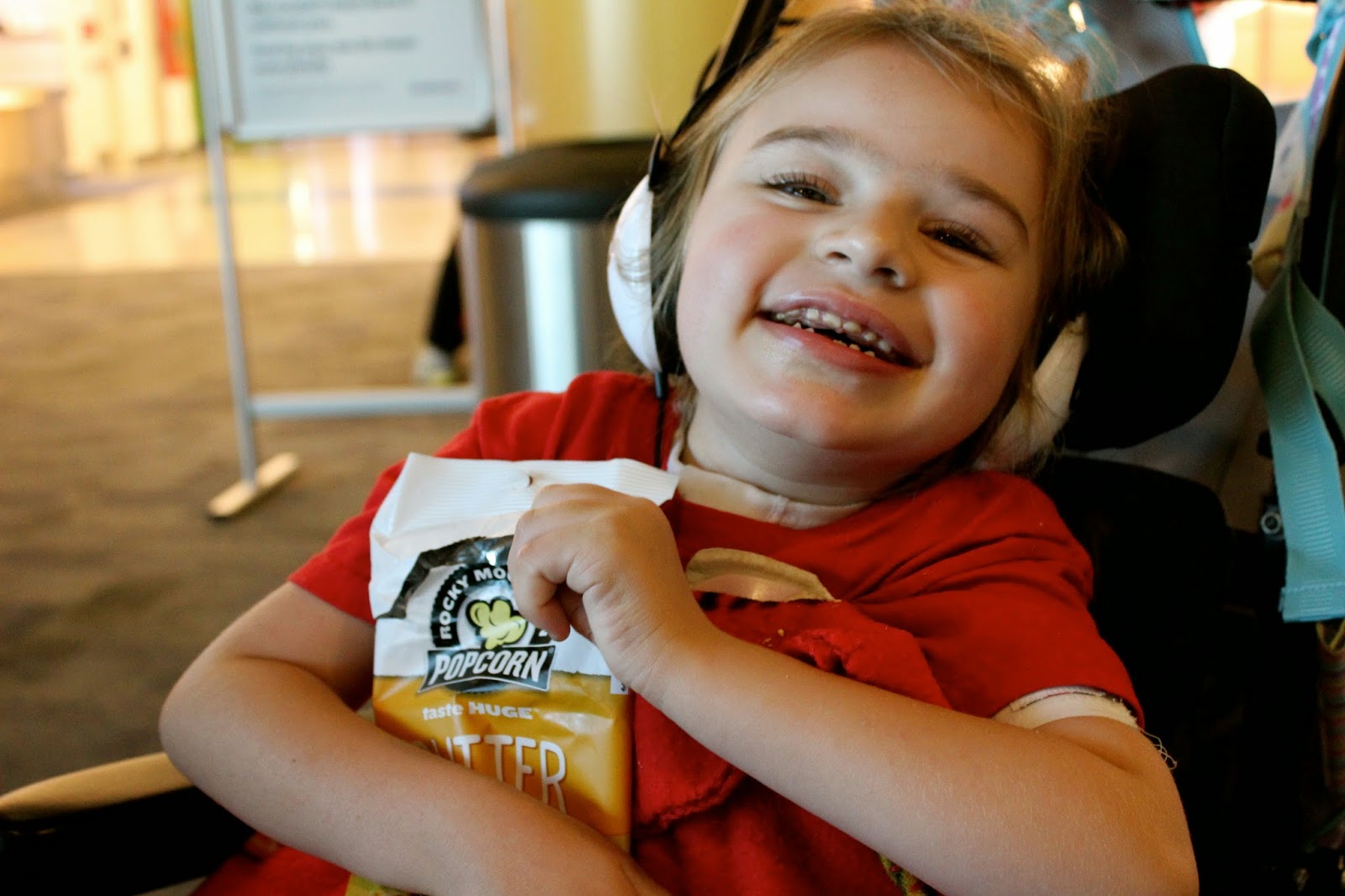 For those of you who always curse me when you read our posts in public and cry, here is your tissue alert.


We could not have had a more positive experience traveling to and from Boston and everything in between. Strangers were so interested in Cammy and approached us to say hi and learn about Cammy We are constantly reminded of kind hearts of strangers and that Cammy brings out the good in people.

Cammy's Chicago Blackhawks blanket was also a great ice breaker! If you know us, we are usually wearing a "team" shirt like "Cammy Can" or in this case, I was wearing my "Proud Mom" shirt and grandpa B was wearing his "Proud Grandpa" shirt with a wheelchair making up the "o" in "Proud."

We handed out so many of Cammy's "business cards" which gives a description of Cammy and Rett syndrome, along with our Facebook page and Rettsyndrome.org website to learn more.

While we were waiting to preboard our Southwest Airlines flight, the Southwest agent checking tickets came up to us to meet Cammy and tell us how amazing she's being (our flight was delayed 40 minutes). While we were telling her all about Cammy, I kept noticing the first couple of people in the "A" check in line listening and smiling at us. There was a young red headed man who I saw typing on his phone, but looking up at his smiling.

I was speaking to Cammy when I felt a tap on my shoulder and it was the red headed man. He had a big smile on his face and showed me the screen of his phone.

I looked up with tears in my eyes and gave him a huge hug.

We continued to chat for 20 minutes like we were old friends. Meeting Eric was the highlight of my Boston trip.

Eric is in a clinical trial through UMASS with stem cells. There were 6000 applicants and he's one 48 patients in the study.

Up until yesterday I had only read about ALS. Last night, I met a truly remarkable young man not giving up and living life.... smiling and joking around. 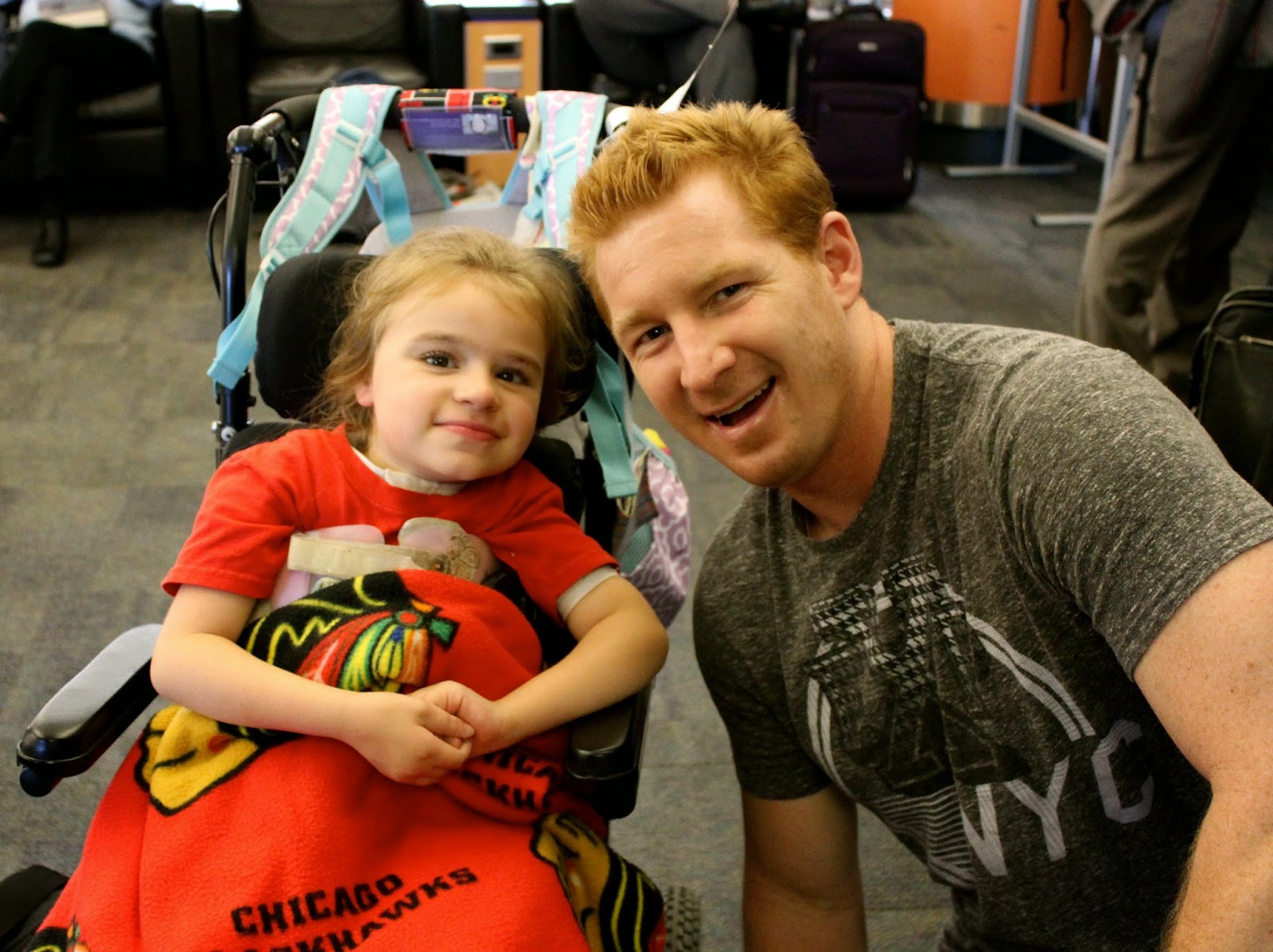 Cammy stayed up the entire flight home.  I think she was excited to see Billy and Ryan. 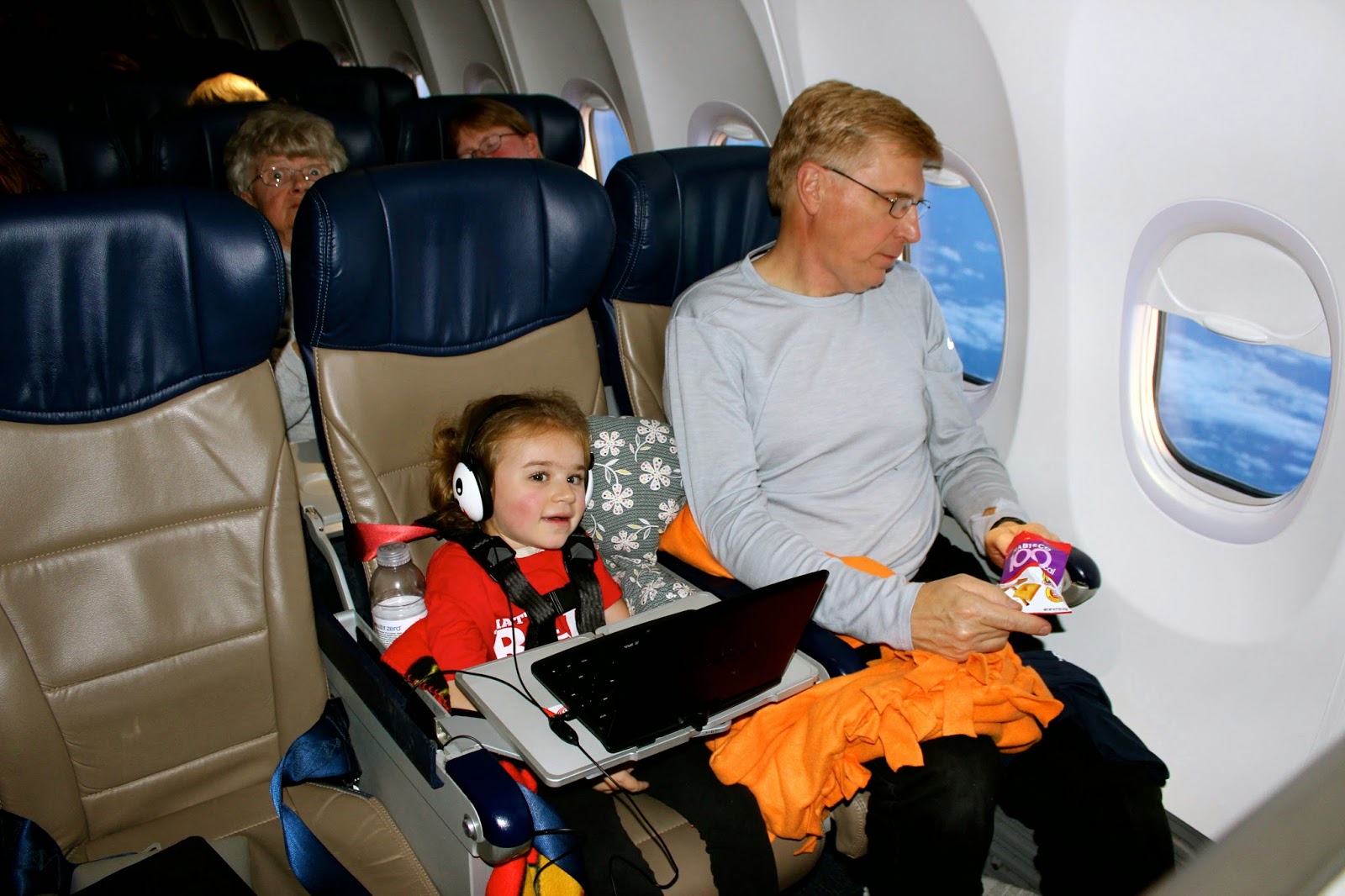 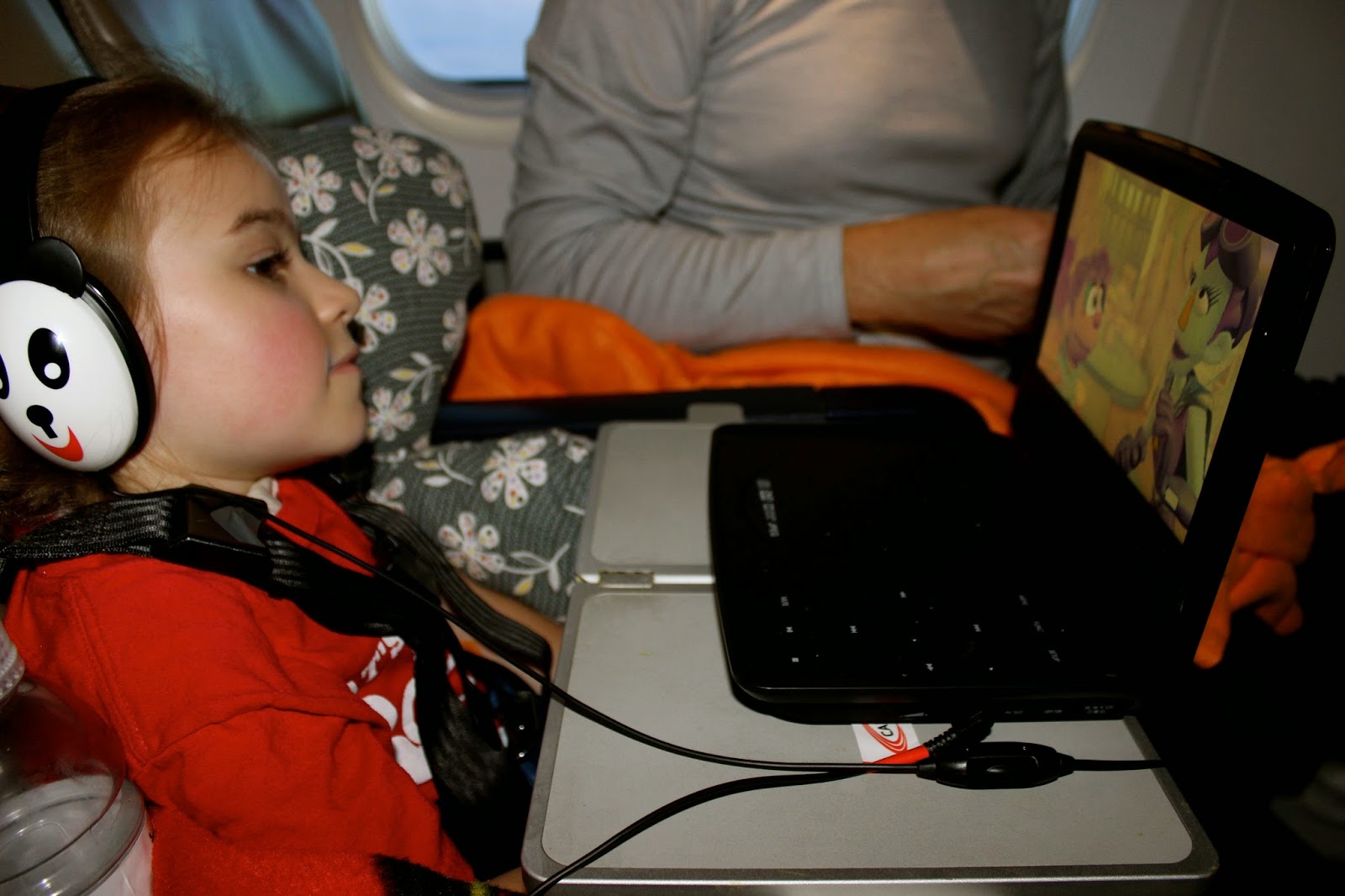 Boston trip #2 in the books.
Grandpa B, Cammy and Mom signing off. 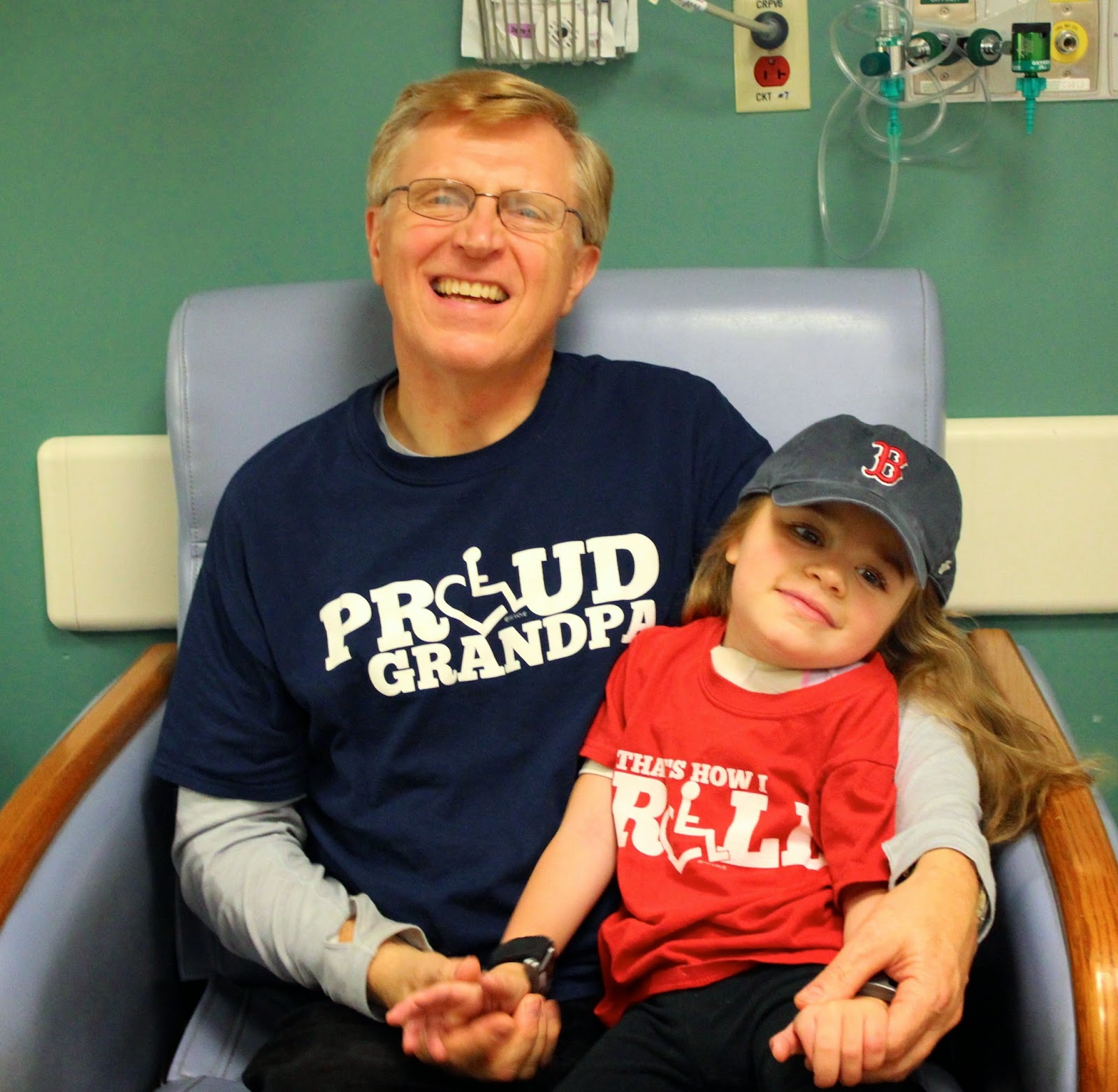 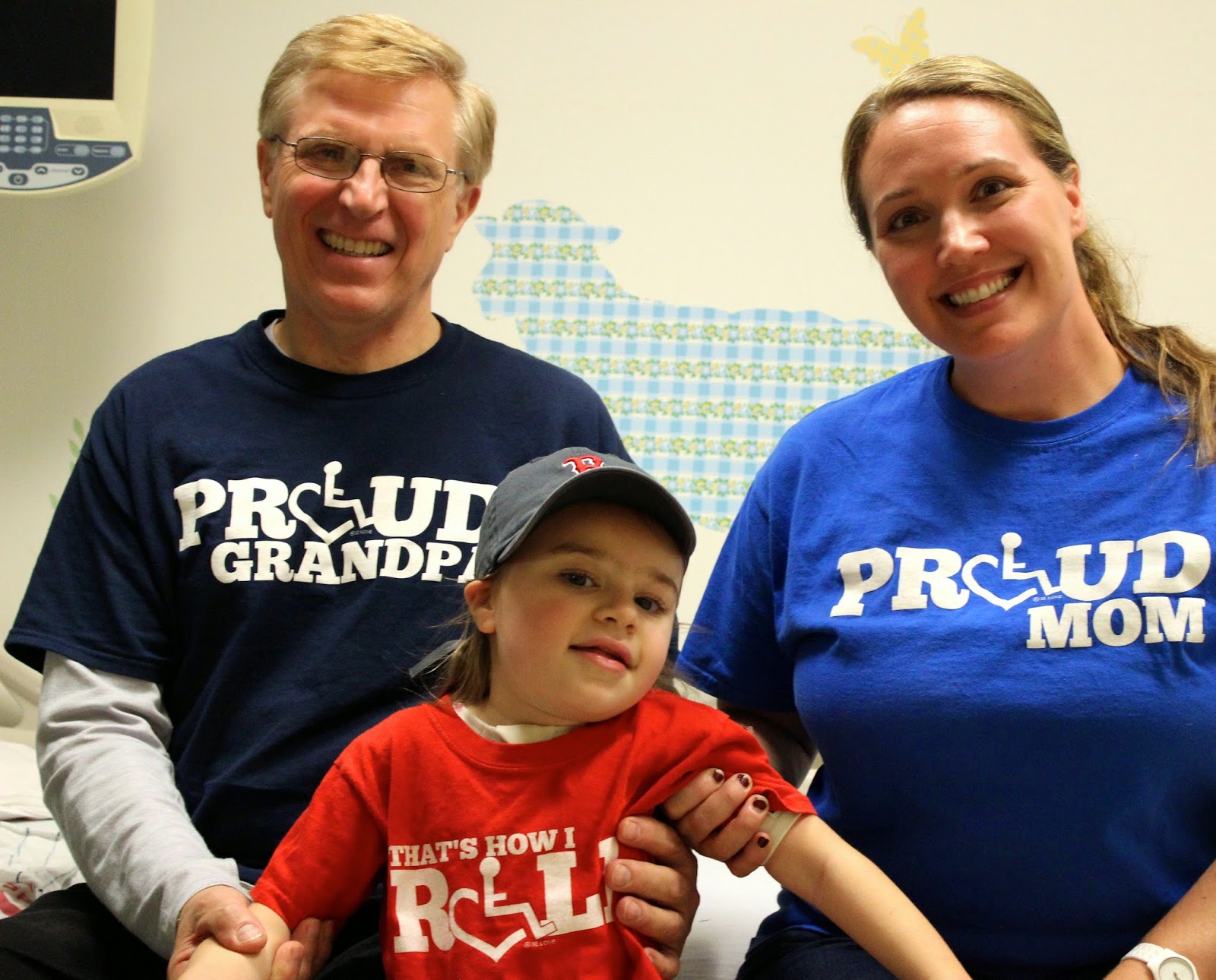