After seeing my 10 year old niece, Carly's summer bucket list laying around her house, I got inspired.  What a great way to make sure we do fun things this summer with Cammy and Ryan!
We created "Cammy's Summer 2013 Bucket List". 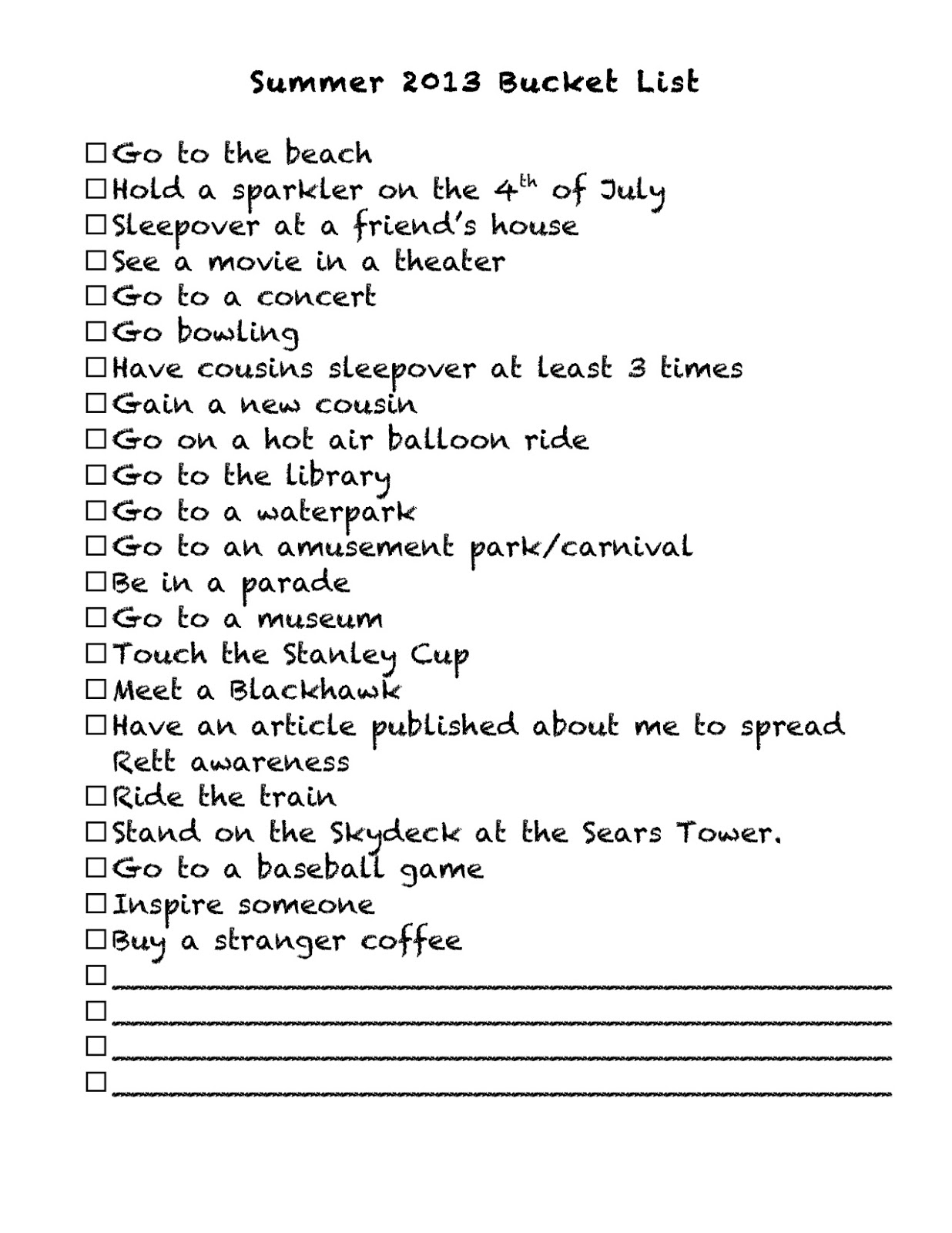 We actually knocked off quite a few things this past week.
Let me backtrack to last week.  After the Blackhawks won the Stanley Cup, we put a call out on Facebook asking anyone if they were going to the Hawks parade, meeting a Blackhawk or Lord Stanley, if they could bring Cammy Can (our logo) along and take a photo.  Cammy's one on one WDSRA summer camp swim aide, Flynn answered the call of duty.  She was on a mission!  On Saturday, June 28, Flynn and Sarah (another WDSRA counselor) went to Yorktown mall (after a long day in the city for the parade) with our Cammy Can logo to wait in line to meet Bryan Bickell and Niklas Hjalmarsson.  Flynn told Bickell all about Cammy as he signed our logo and posed for a photo.  Sarah got Hjalmarsson's autograph and photo too! 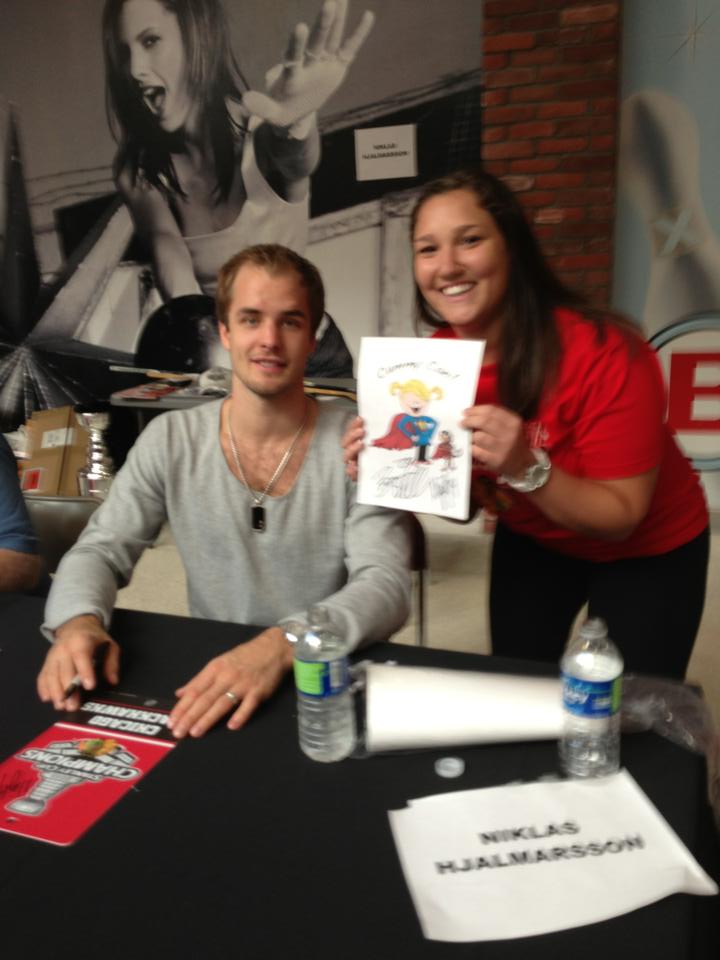 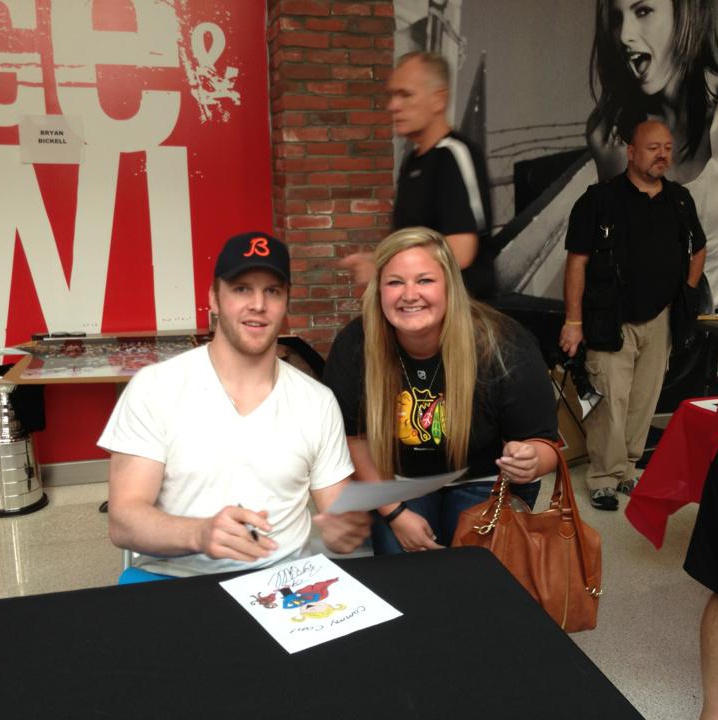 On July 2, as Cammy was at school preparing for her big school parade, I received a message on Facebook from someone I did not know and who was not even friends with Cammy Can.

As I clicked on the link in the middle of juice aisle in Dominicks with Ryan driving the fire engine cart, I began to cry.  Was this a joke?  Who wrote this?  I could not figure out how this article was written and published without anyone contacting me about facts.  It was an unbelievably beautifully written story about Cammy and Rett syndrome.
After watching Cammy do an awesome job in her school parade, we put the pieces together.  The night before Jeric was getting his haircut and the lady cutting his hair (our next door neighbor) told him all about Cammy.  Jeric was so intrigued by Cammy that he did a little more research and felt as though her story was newsworthy for his online sports blog!  I am constantly amazed at the 'Six Degrees of Cammy Can" and how many hearts she has touched.

Have an article published about me to spread Rett awareness

On July 2, Cammy's school had their 4th of July parade.  High school band students performed as all the students, teacher and aides proudly marched, walked, shuffled and rolled around the school all decked out in red, white and blue.  Cammy waved with a smile on her face to me and Ryan.  We were so proud of her. 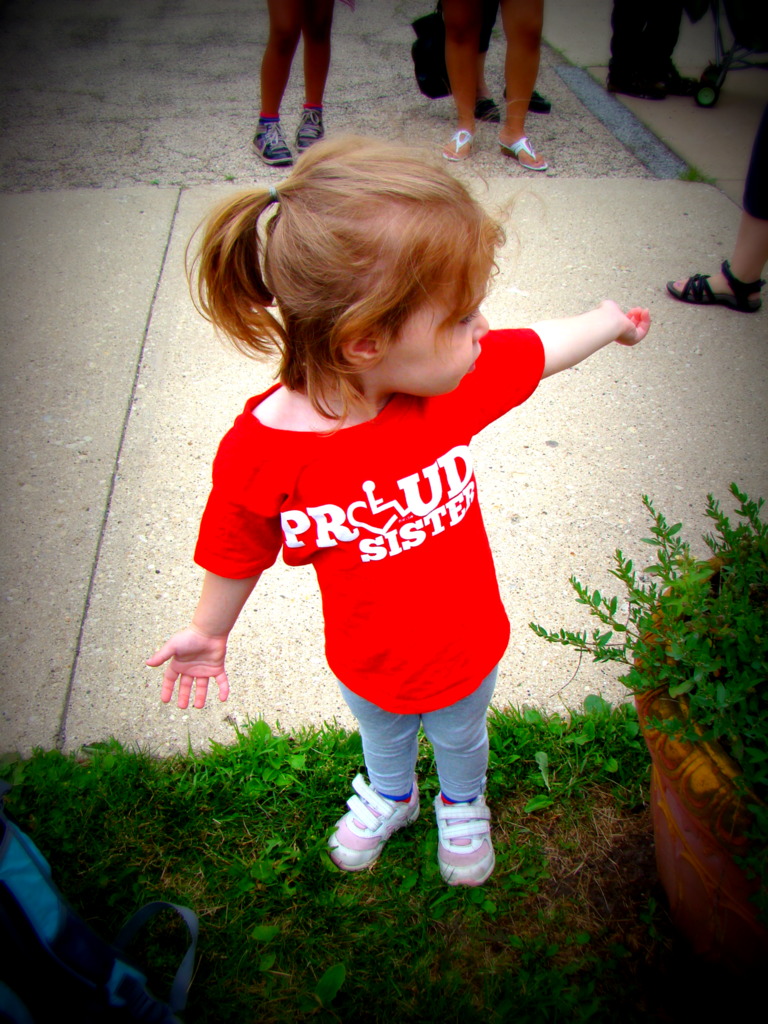 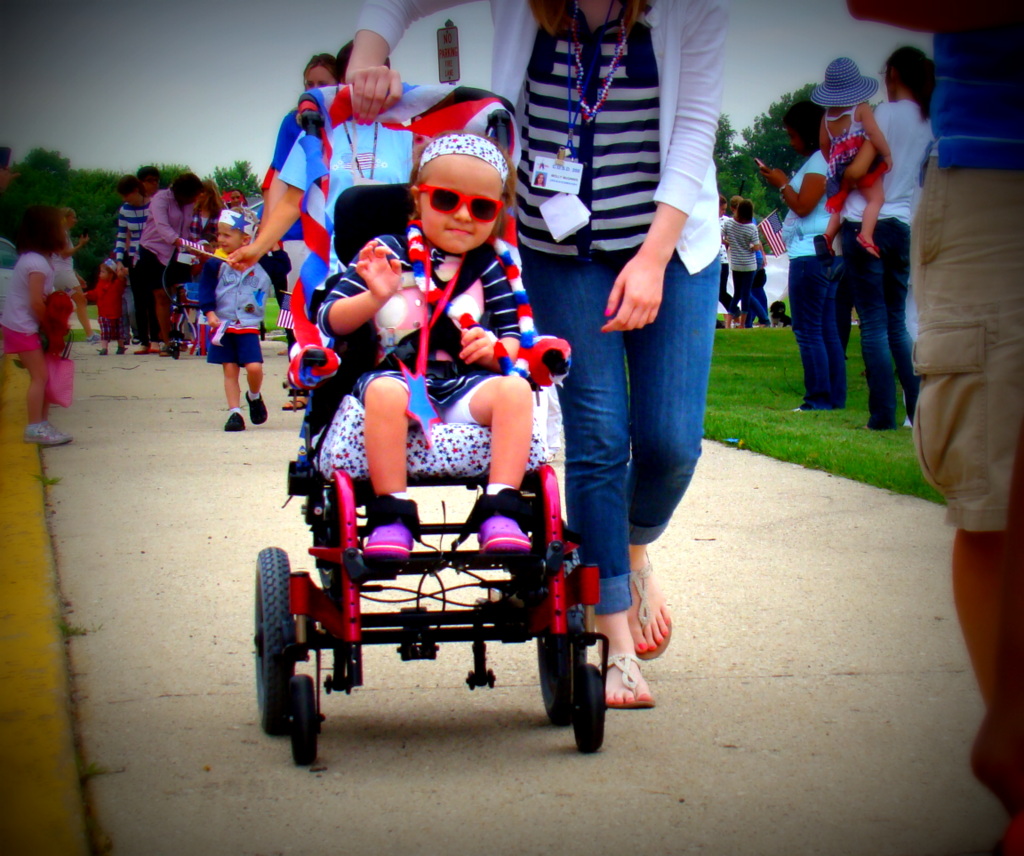 Be in a parade

On the 4th of July both of my girls were confused when we told them that they can hold a sparkler as we have taught them not to play with fire. 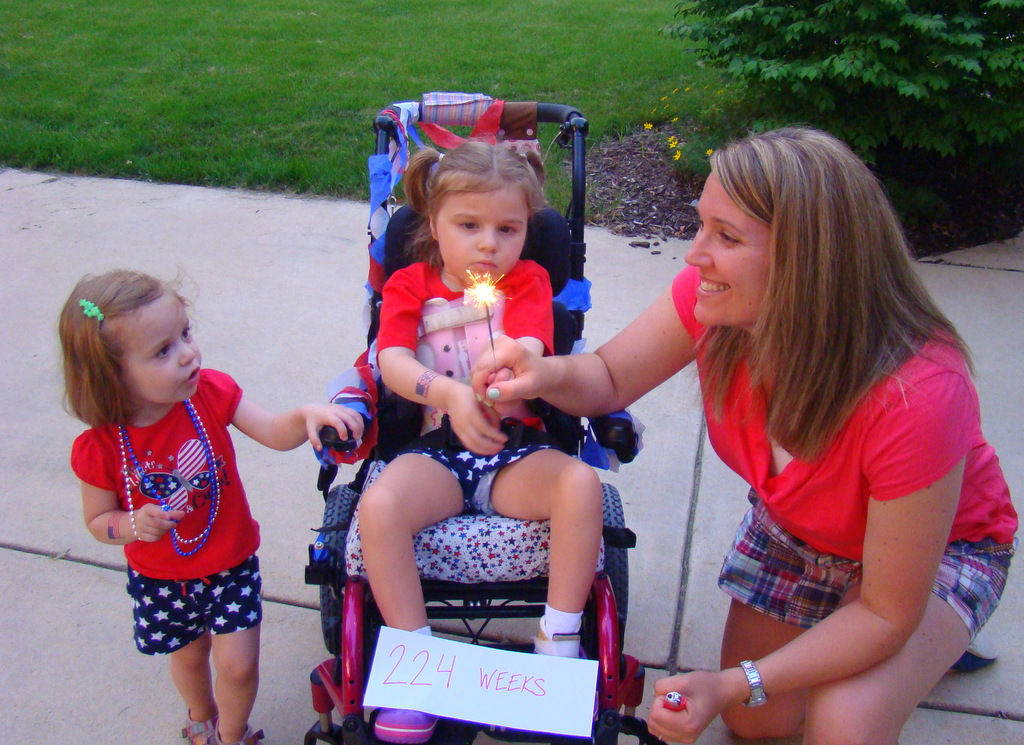 Hold a sparkler on the 4th of July


We are so fortunate to have family live so close.  This summer, we have seen the Cernek cousins several days each week.  Carly (one of the twins) wrote on her summer bucket list "sleep over at the Babiarz house 10 times."  I was so excited when I saw that.  I knew having them sleep over 3 times would be very easy to accomplish! 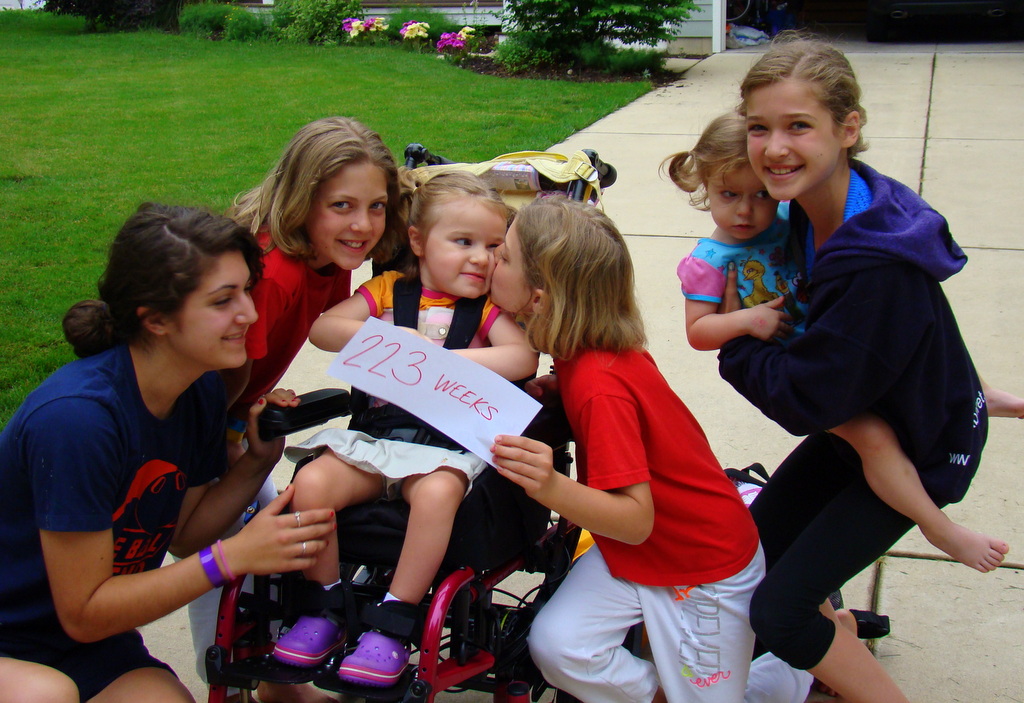 On Friday, July 5 we met the Cernek cousins (and Katie) to see Monster's University.  Even though Cammy's wheelchair is much more comfortable for her, sitting 4 rows from the screen cannot be good for anybody.  Luckily we had a big crew of people with us who were happy to hold Ryan and Cammy as we ditched the wheelchair on the ground floor and sat about 20 rows up the stairs. 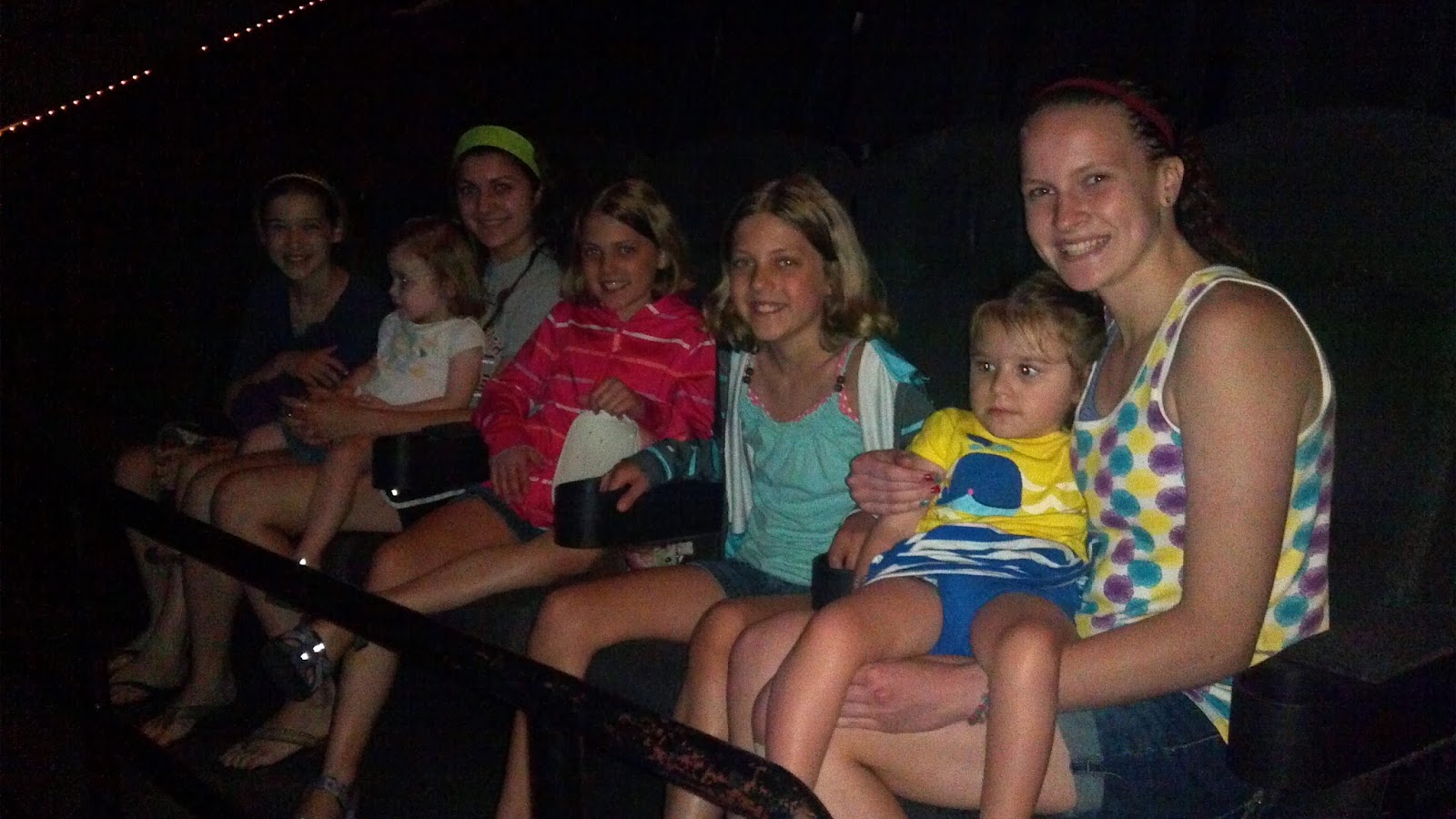 See a movie in a theater

About a week ago, another Rett mom posted in our little Illinois Rett facebook group that the Lisle Eyes to the Skies had a special opportunity for people with special needs.  SEASPAR and the Eyes to the Skies have the nation's only FAA-approved wheelchair accessible hot-air balloon.
Cammy can to go on a tethered hot air balloon ride in her wheelchair!  I must admit that going on a hot air balloon ride has always been on my bucket list, so I eagerly called the next day to book a slot.
On Saturday, July 6 at 6am, our entire family got to go on a hot air balloon ride. We are so grateful for organizations like WDSRA and SEASPAR to provide incredible opportunities like this with amazing staff and volunteers.  This video shows our awesome experience.  The smile on Cammy's face says it all.