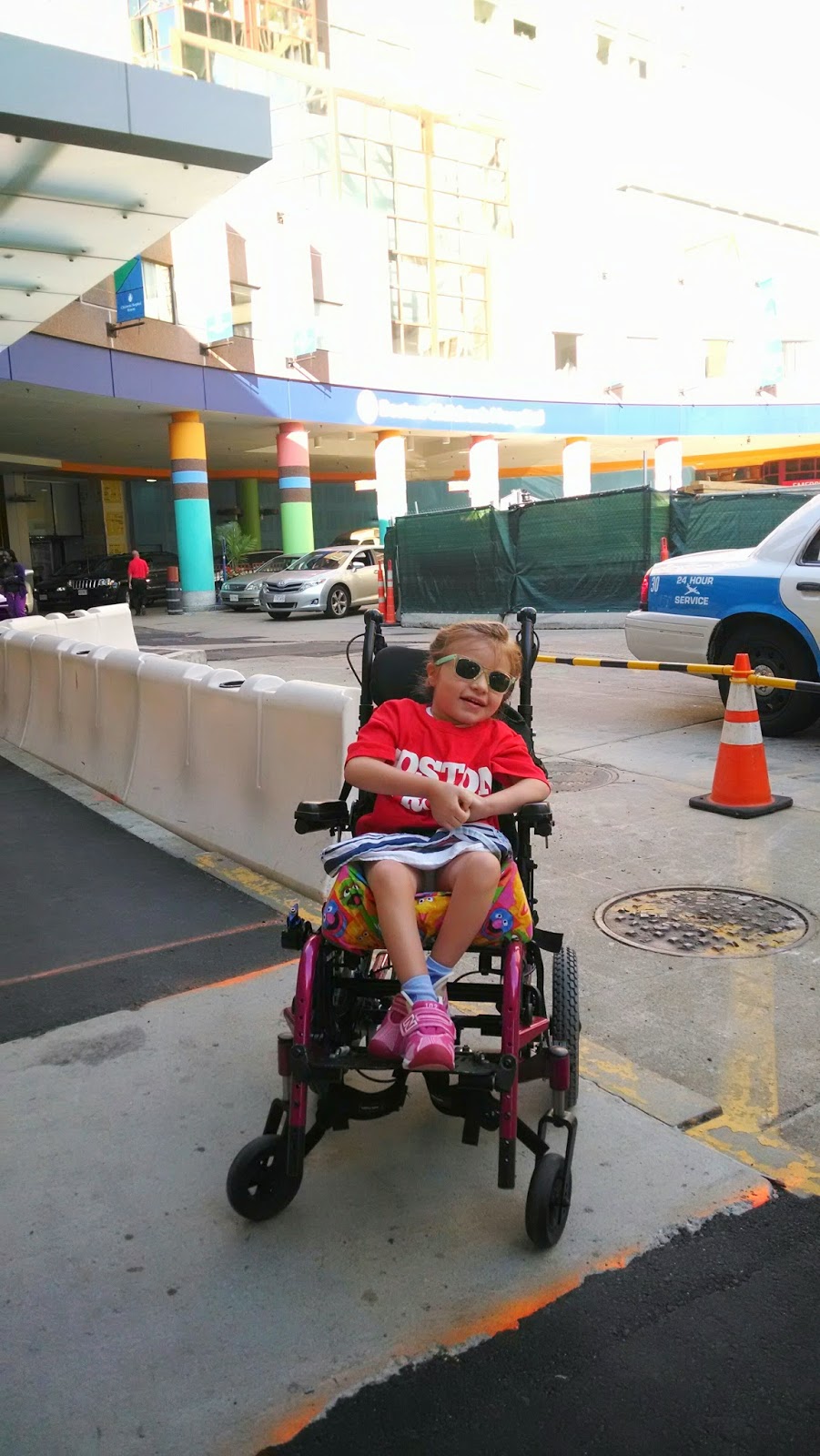 We arrived at the hospital at 7:45am in our team uniforms.  We received smiles from everyone we passed and several compliments on the shirts. 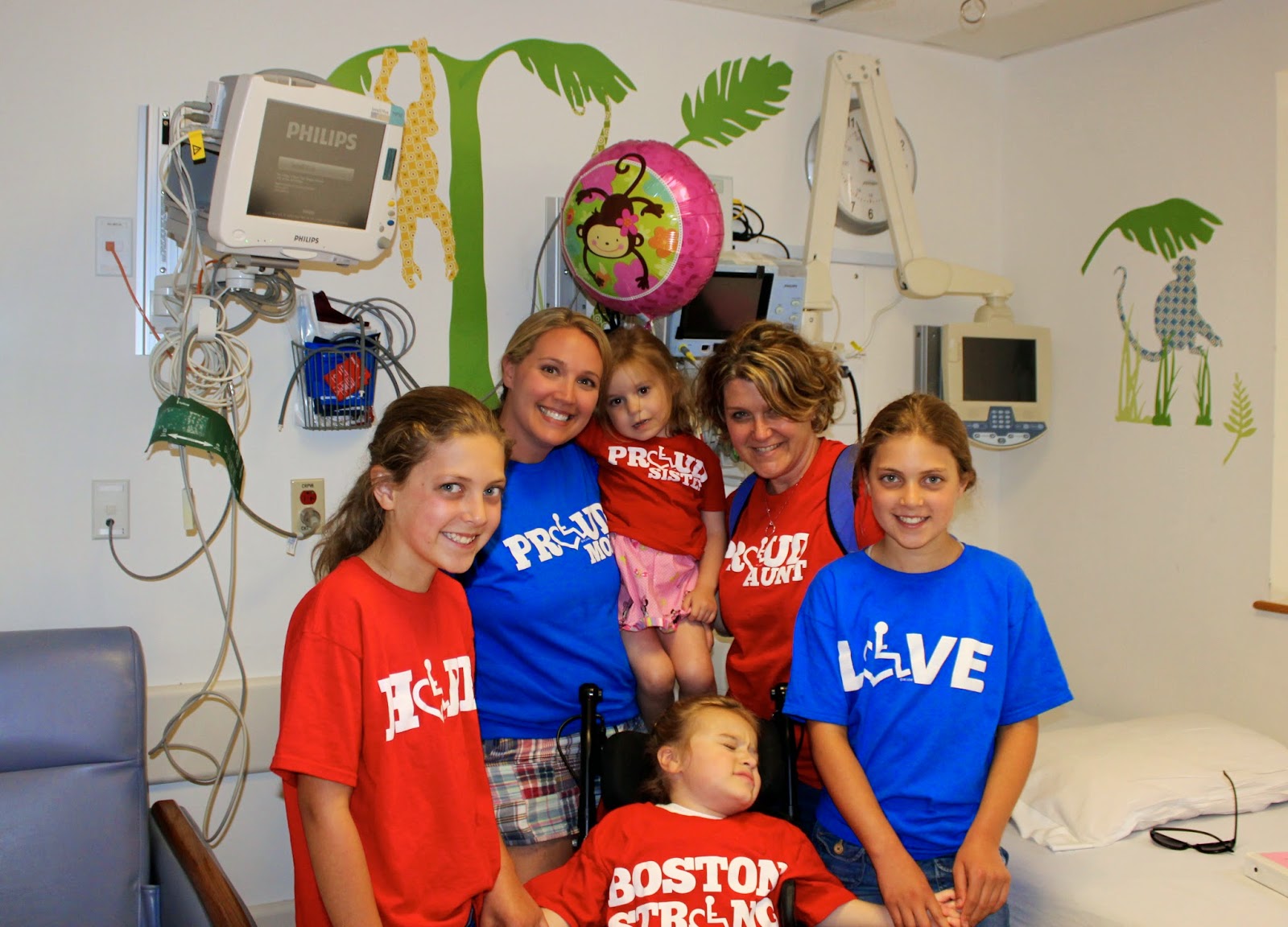 Kim took the girls for breakfast in the kid's cafe in the hospital and then off exploring the grounds.  Cammy and I began at 8am in a room with Natalie (who grew up in Palatine) reading us the consent form.  This long form had been sent to us and we read it.  However, it's part of the study procedure to have it read to us so we could sign off on it.  That took 30 minutes.  Cammy had her head phones in, smiling watching Sesame Street. 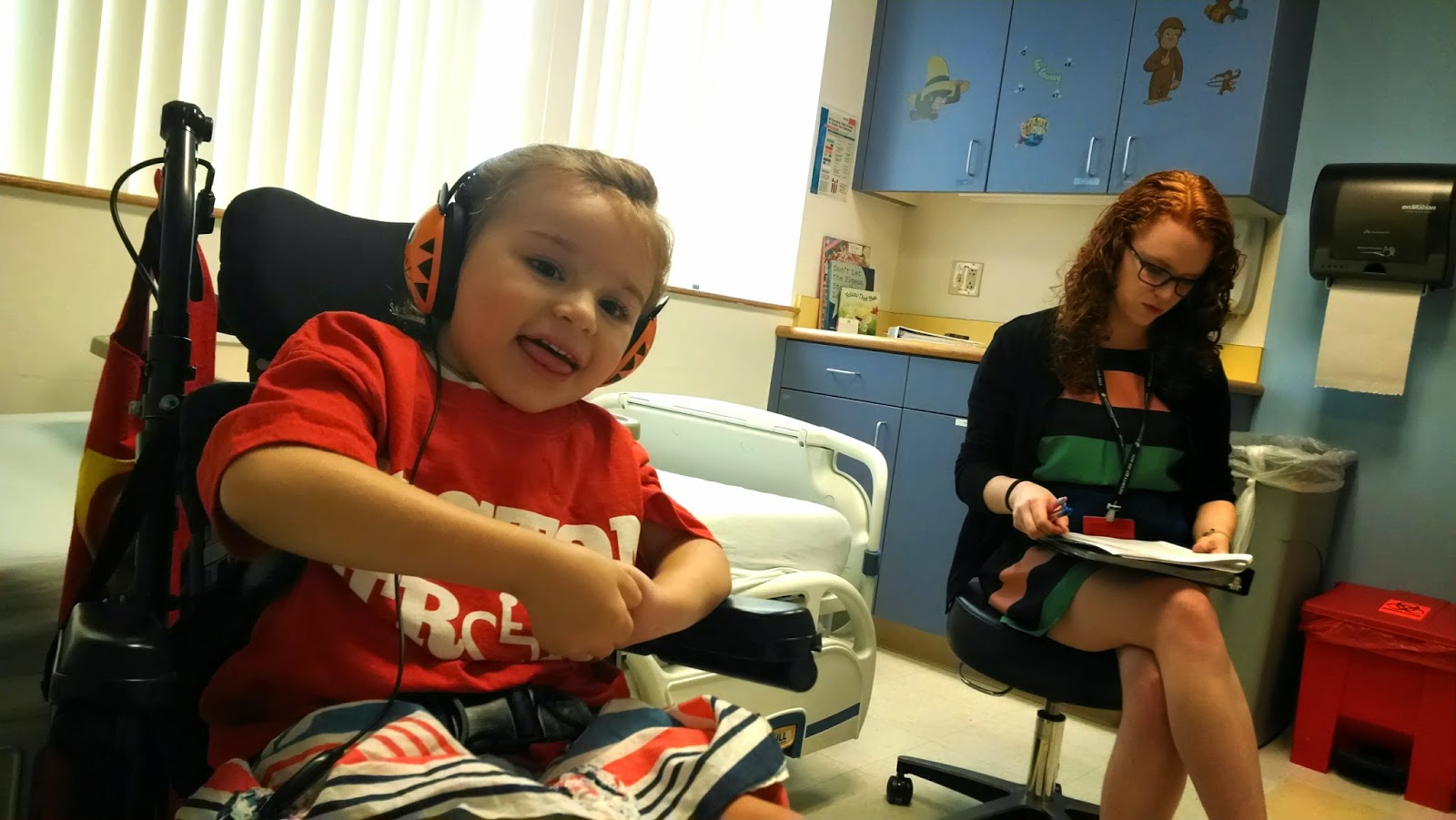 The next part was vitals and measurements. The nurse asked if I wanted to give Cammy a numbing cream for the shots, which would take 20 minutes to activate.  I asked Cammy, who was looking to the side trying to see the ipad, if she wanted a cream so they shots wouldn't hurt. As the words were coming out of my mouth I realized how dumb that question sounded and her response confirmed my thought.  She quickly turned her head and glared at me as if to say "Yes, you idiot!"  Cameron was very cooperative and pleasant during all the measurements and vitals.  Then, came the shots.  I knew this was not going to be easy.  Cammy is a very tough stick. 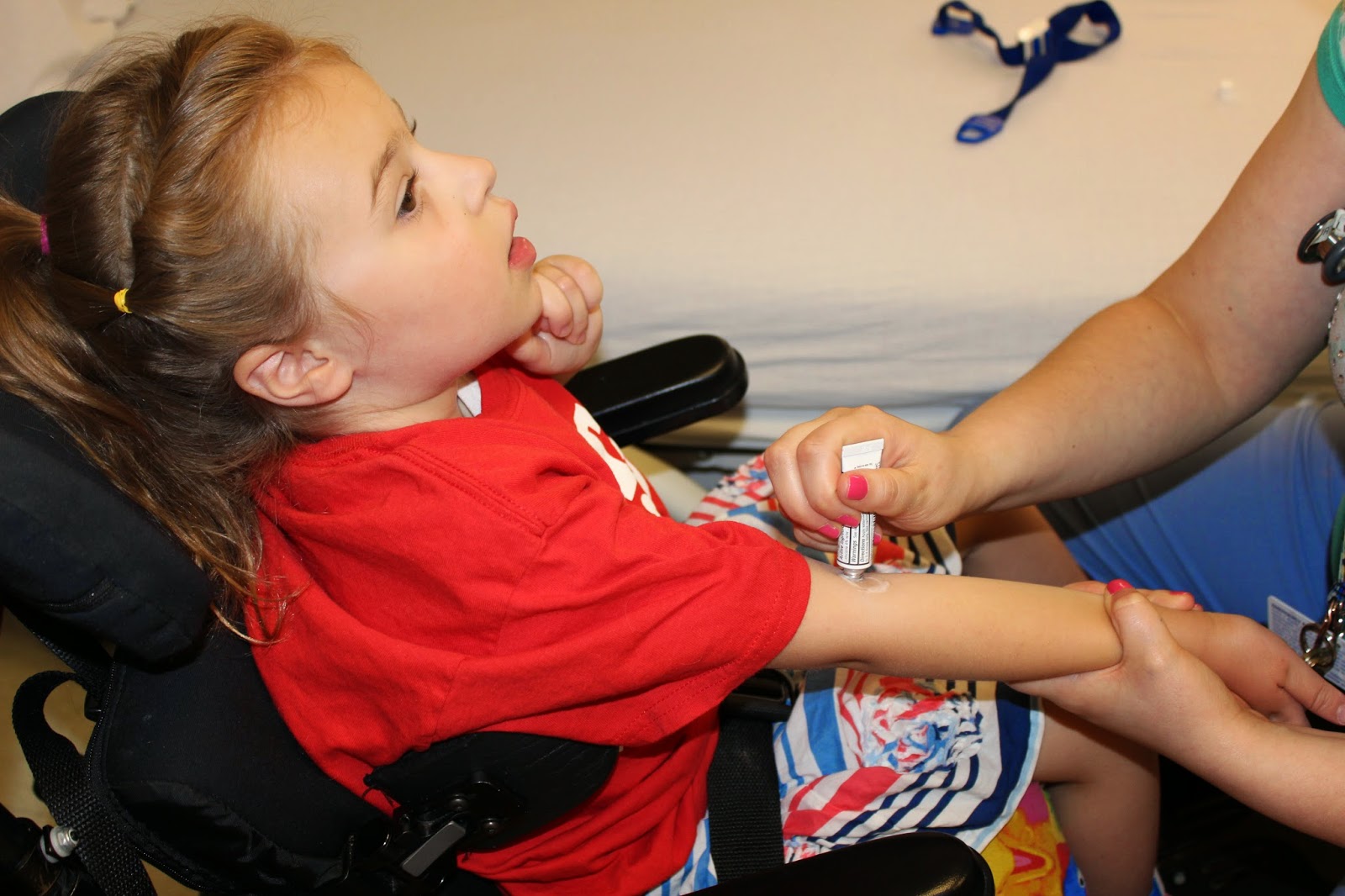 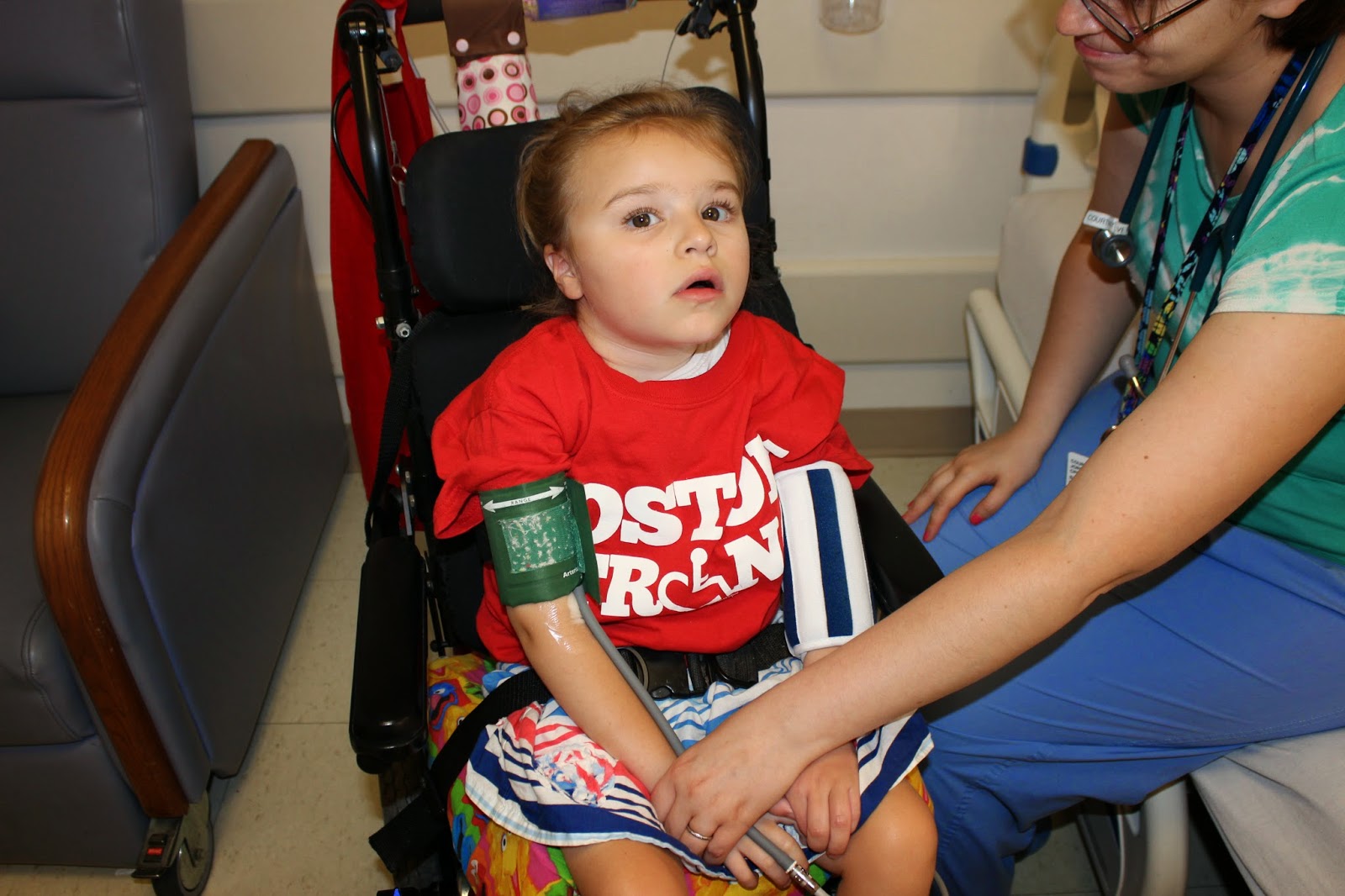 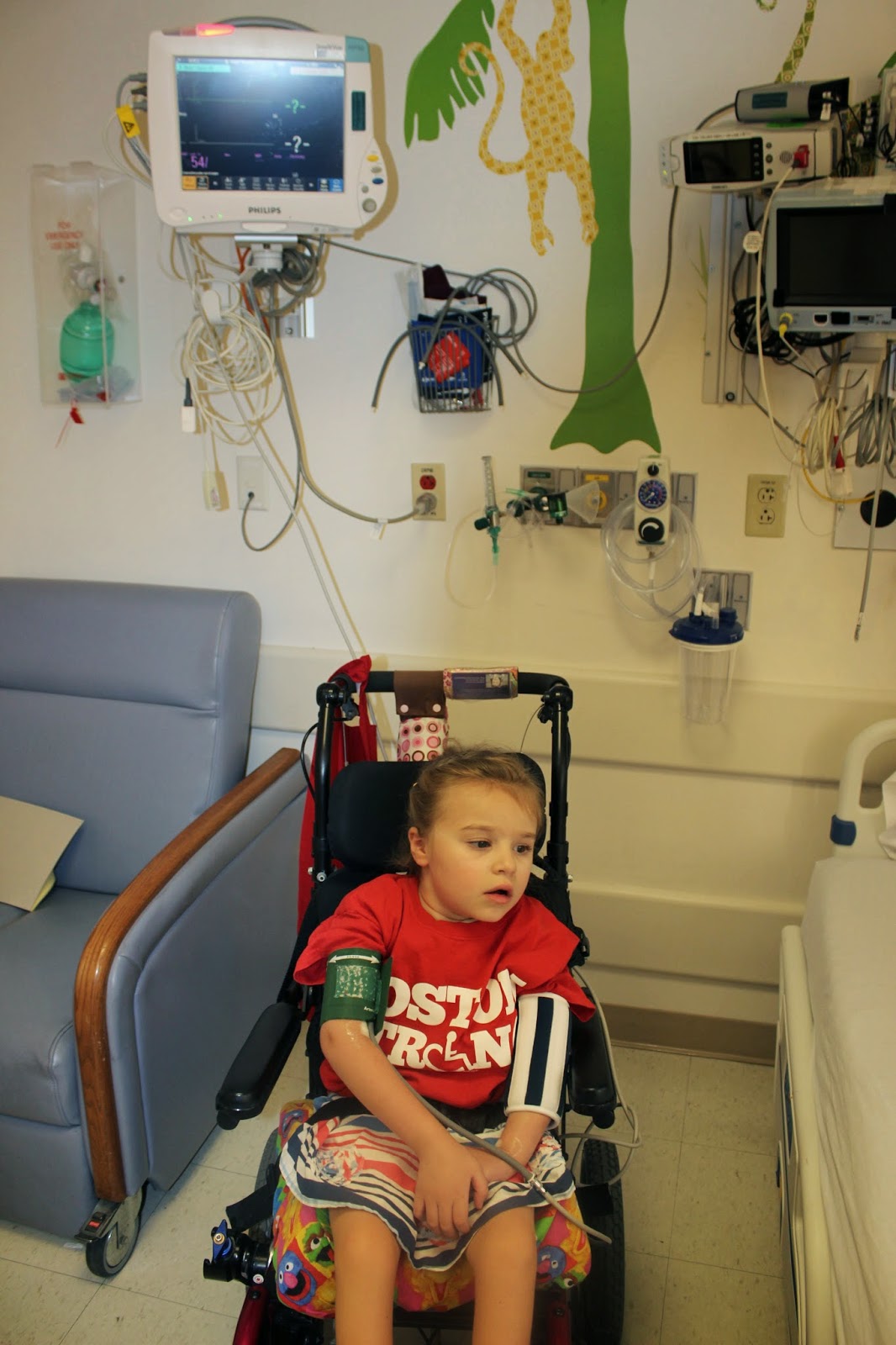 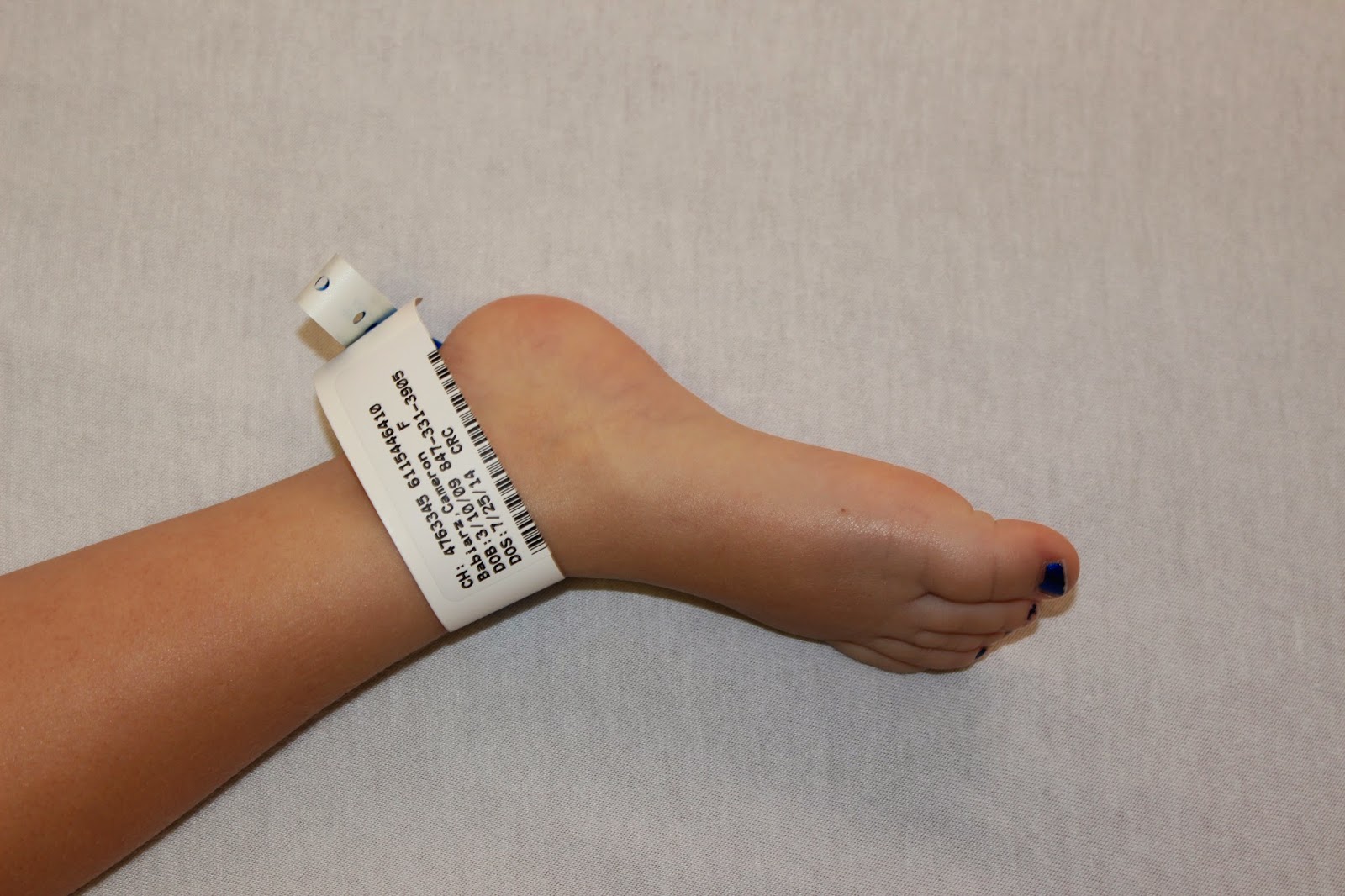 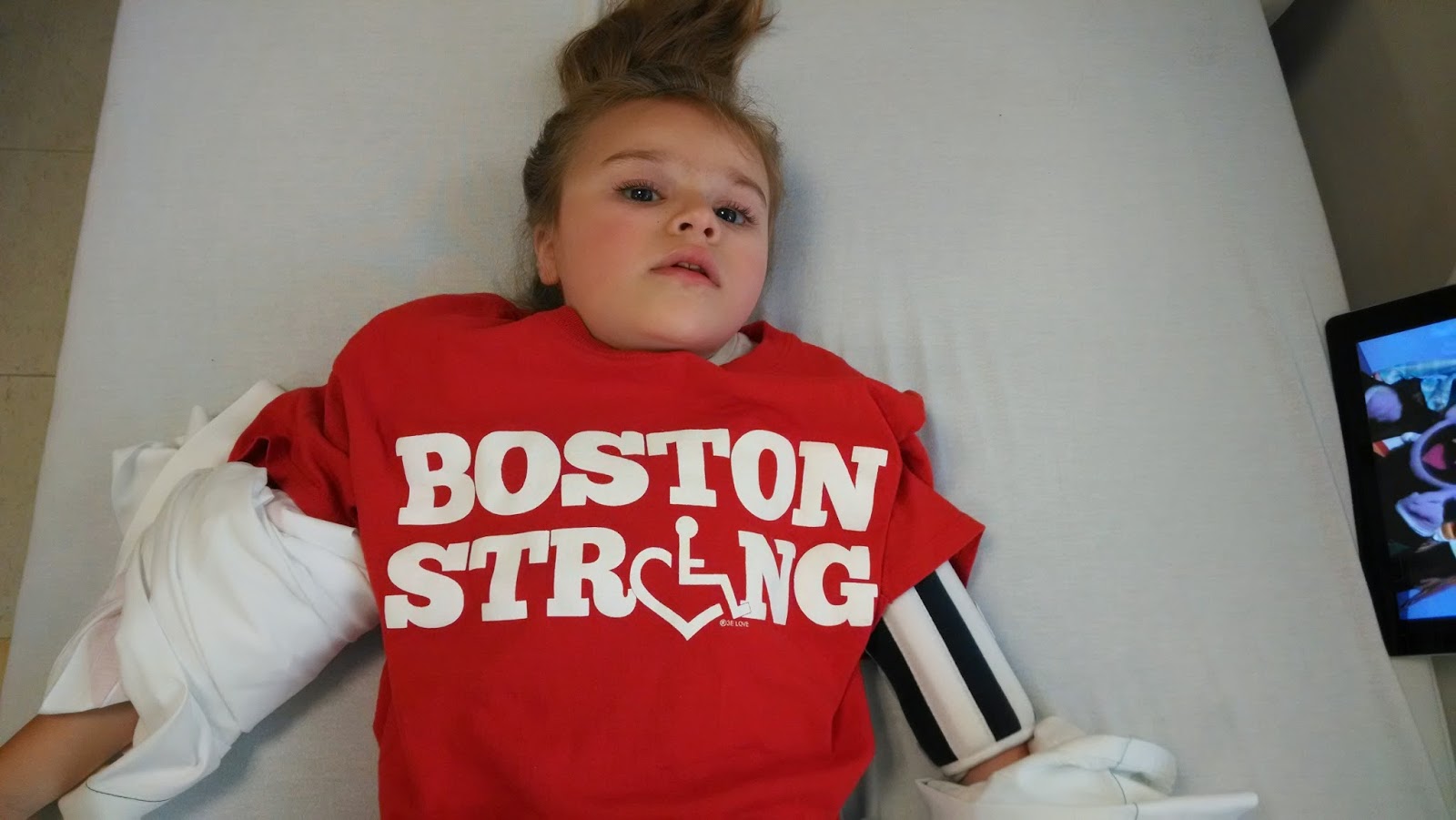 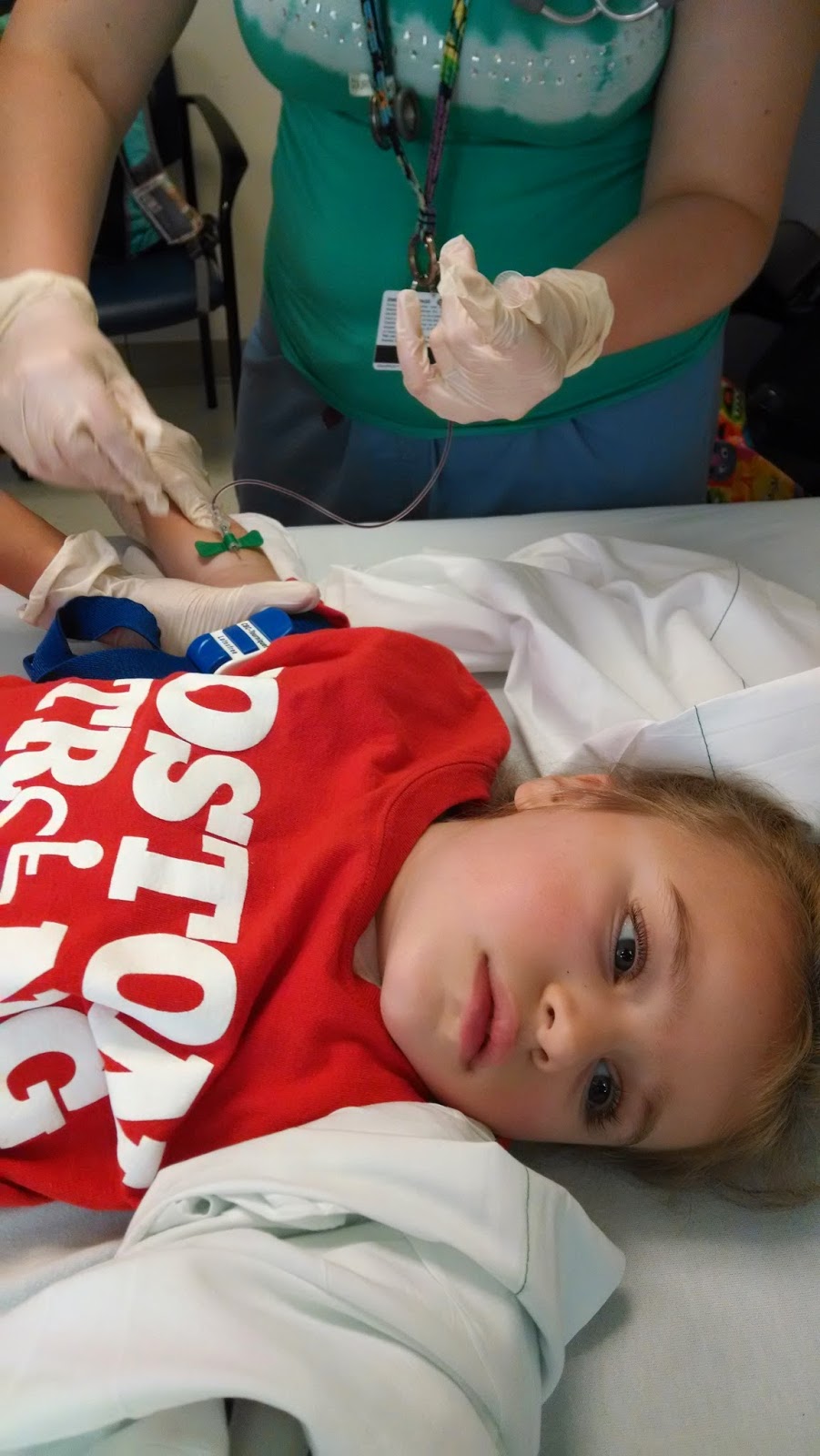 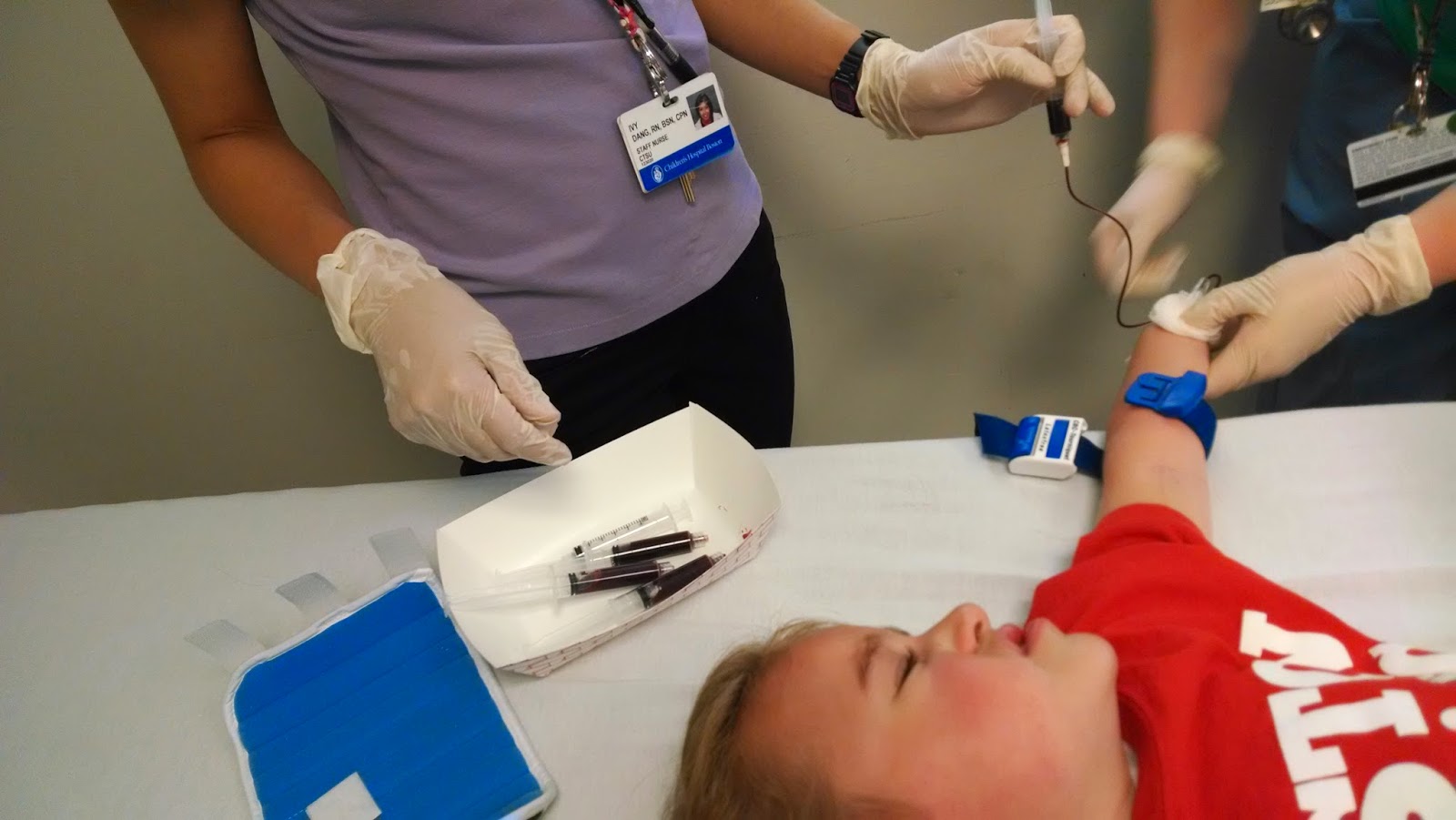 They got what they needed for Friday's visit from her right arm, but I told them that since they were at it, they might as well get whatever they needed for Monday's visit so Cammy didn't have to fast or go through this again.  They poked and poked.  Cammy screamed and cried.  Cammy does not shed actual tears often, I've seen it less than 10 times in the past 3 years.  So when I see the tears, it hurts me even more.  They took 2.5 tablespoons total.  It seemed like a lot more than that seeing all those vials.

Cammy was all flushed after that.  Her demeanor turned around once she saw the peanut butter and jelly sandwich and apple juice the nurse brought in.  She ate it faster than I've ever seen her eat before.

They then took a urine sample.

On our way back from the bathroom, we bumped into a Canadian family just finishing their 3rd checkpoint.  It was nice to meet a new Rett family.

Dr. Tarquinio was ready for us in the room.  He did the physician exam.  I had to answer more questions as he checked Cammy out.  He relieve a couple worries I had too.  I have been worried that Cammy's tonsils are enlarged, but he said they were not.  Another concern of mine was that Cammy was starting puberty early (like now).  After checking a few things, he assured me that she was not. 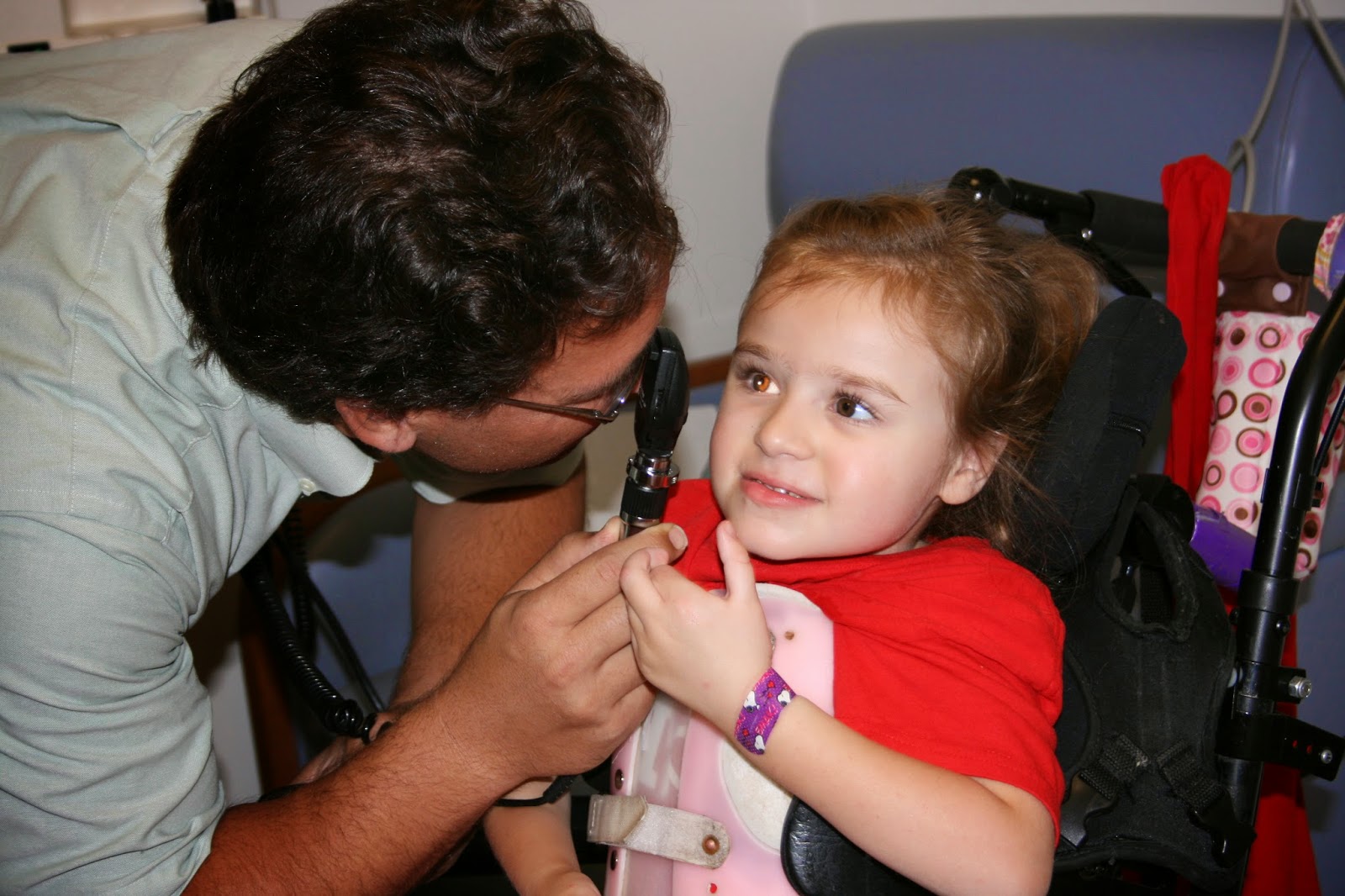 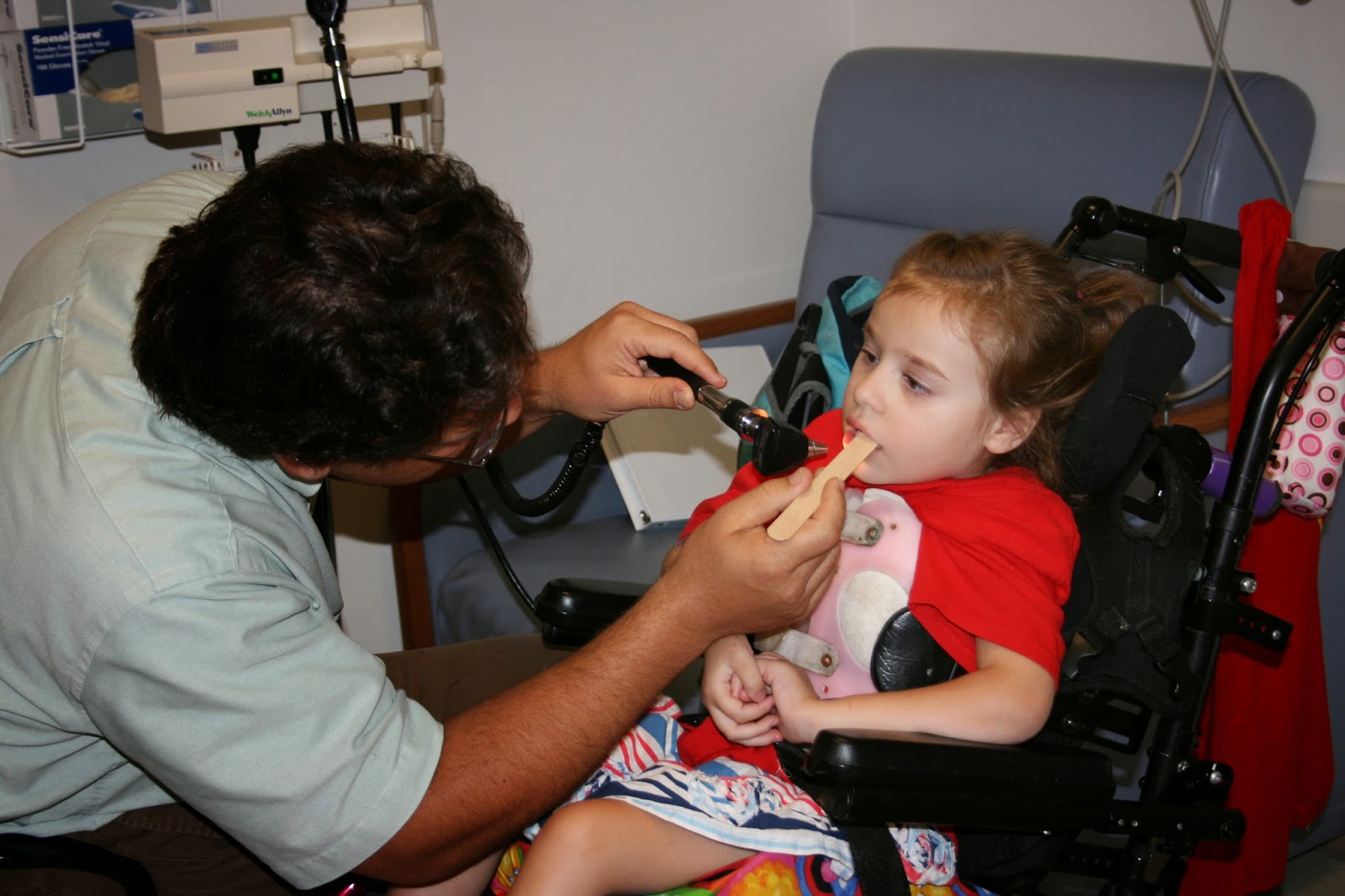 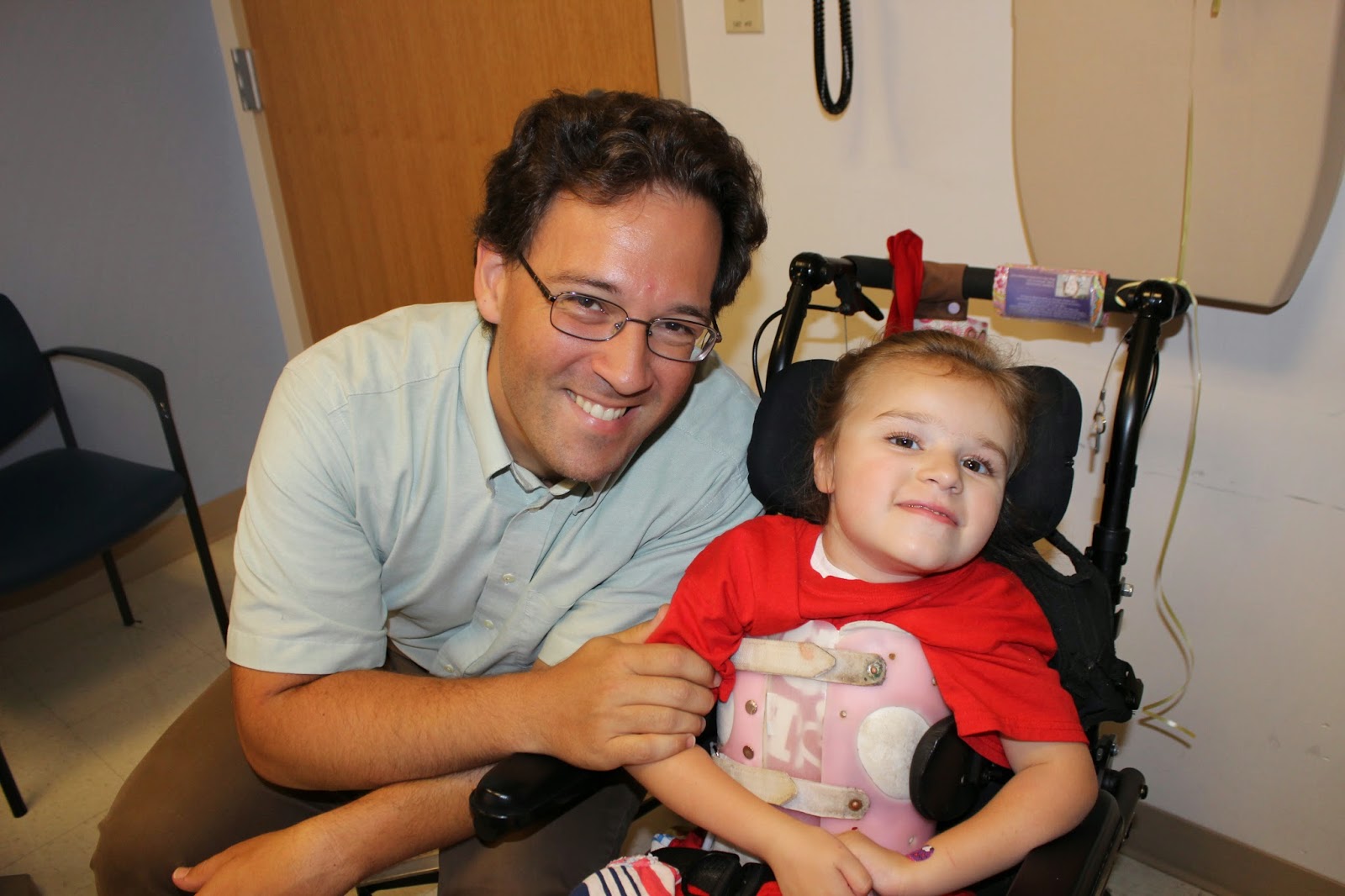 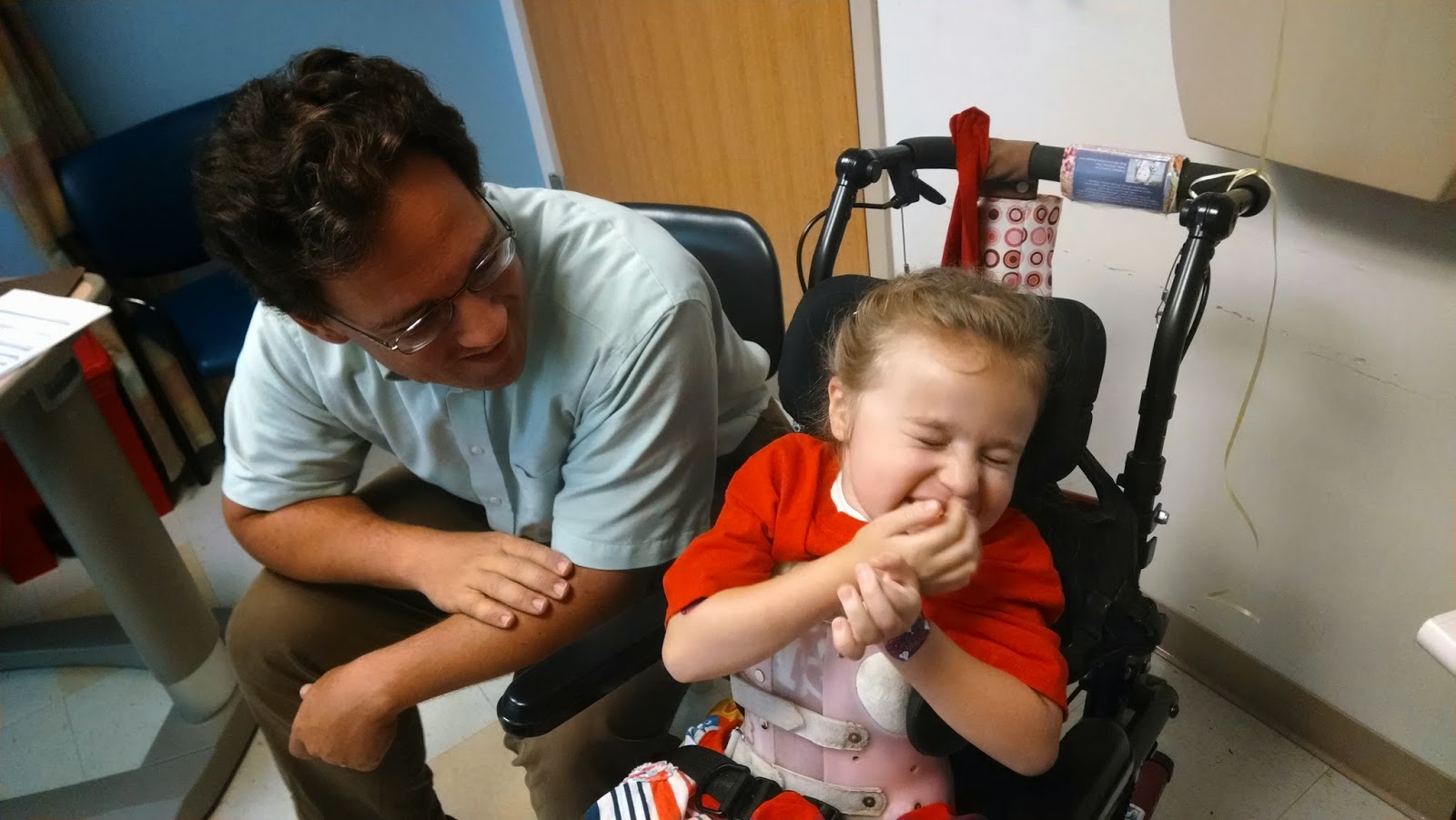 We were then sent for the bone age xray and spine xray.  As we laid Cammy on the xray table for her hand xray, she fell asleep.  I had a huge apron on, leaning over her on the table, looking like Dexter!  I knew her being weak and asleep at 1:20 was going to be a problem for the spine xray, which has been my biggest concern about Cammy getting into the study.  Nothing was going in our favor at this moment, as the chair she was supposed to sit in was too big for her and slippery and she was asleep!  So, Kim and I did our best to press her against the wall, keep her straight, push her shoulders back and push her head back as best as we could. 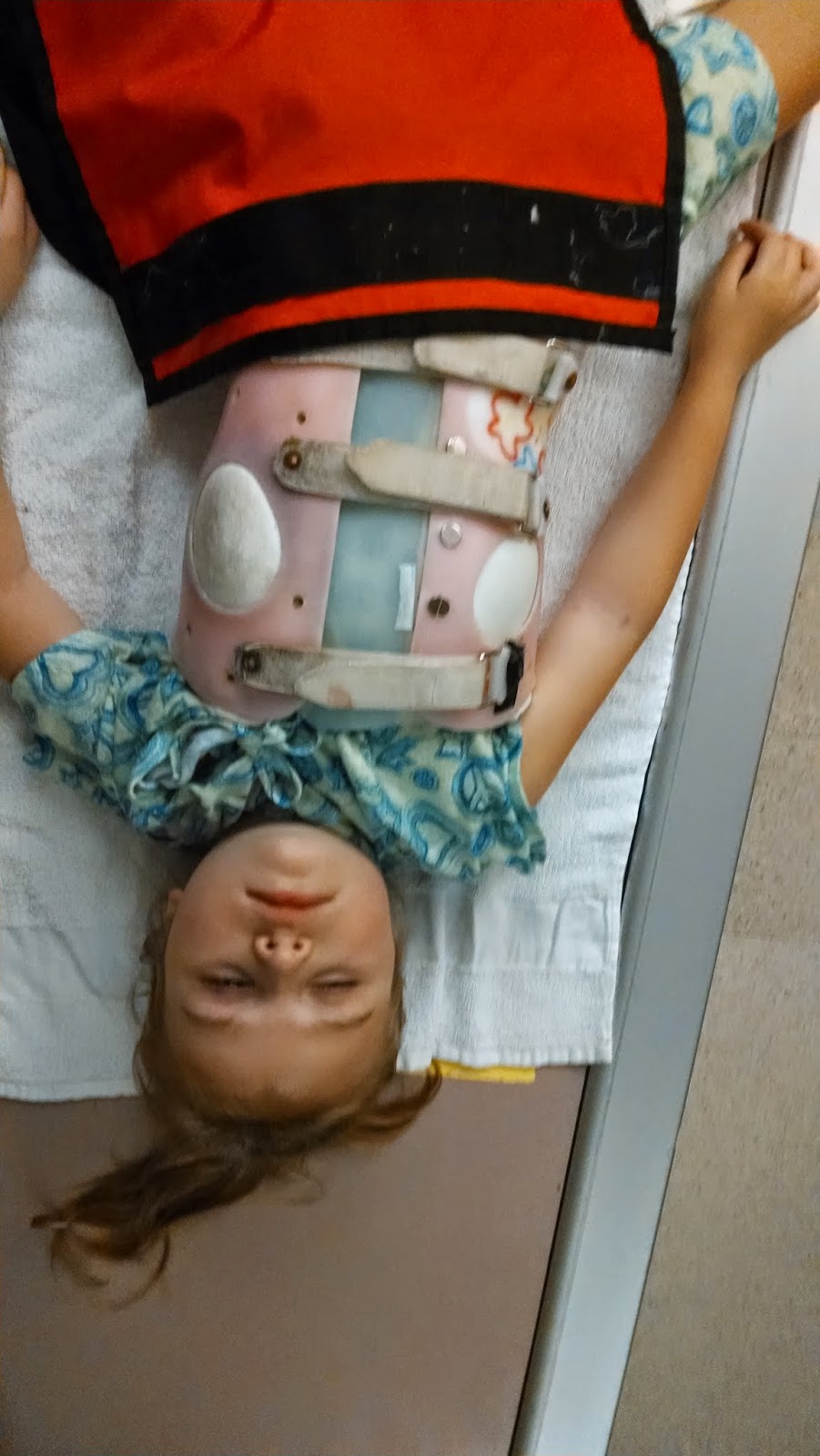 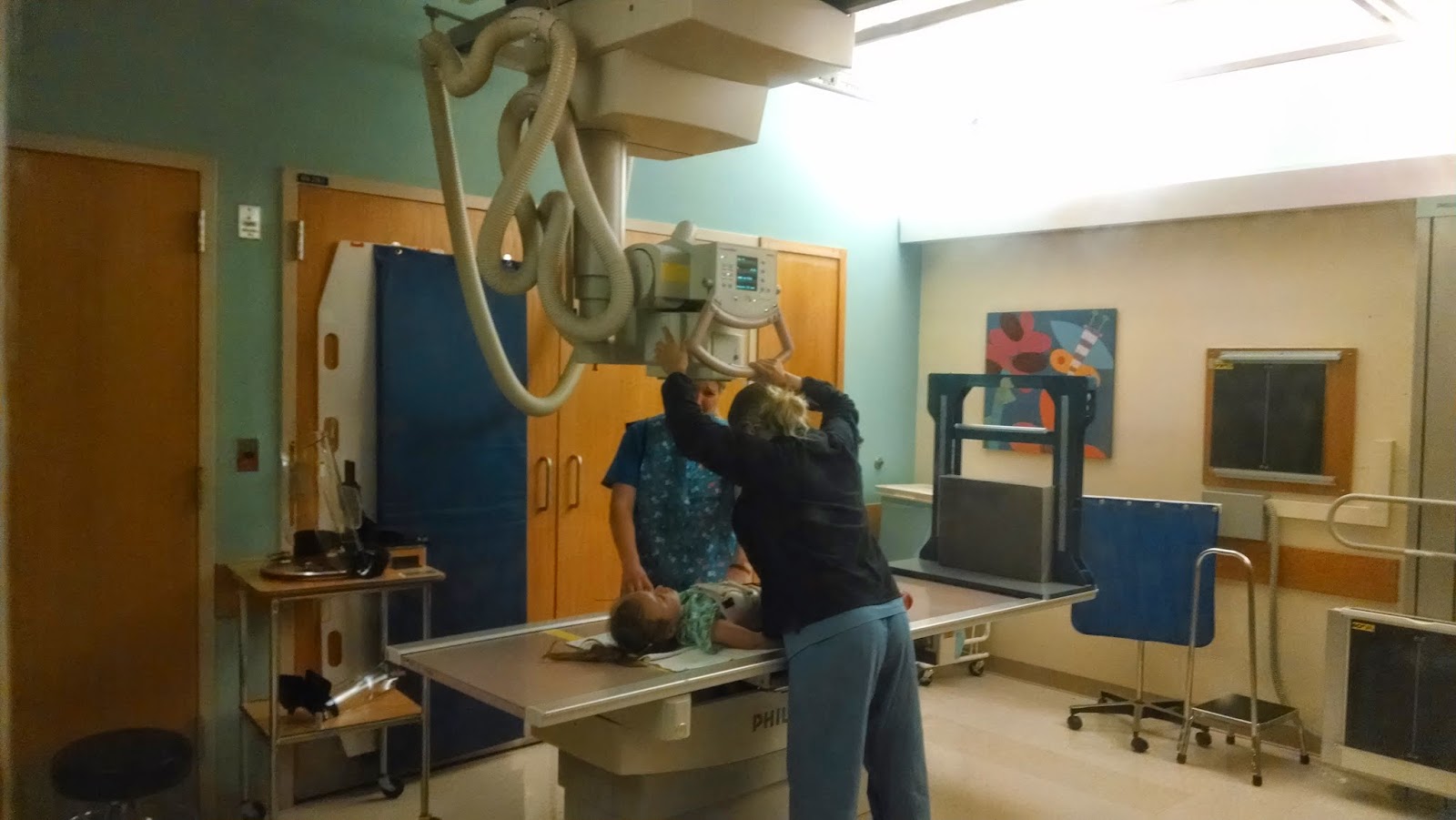 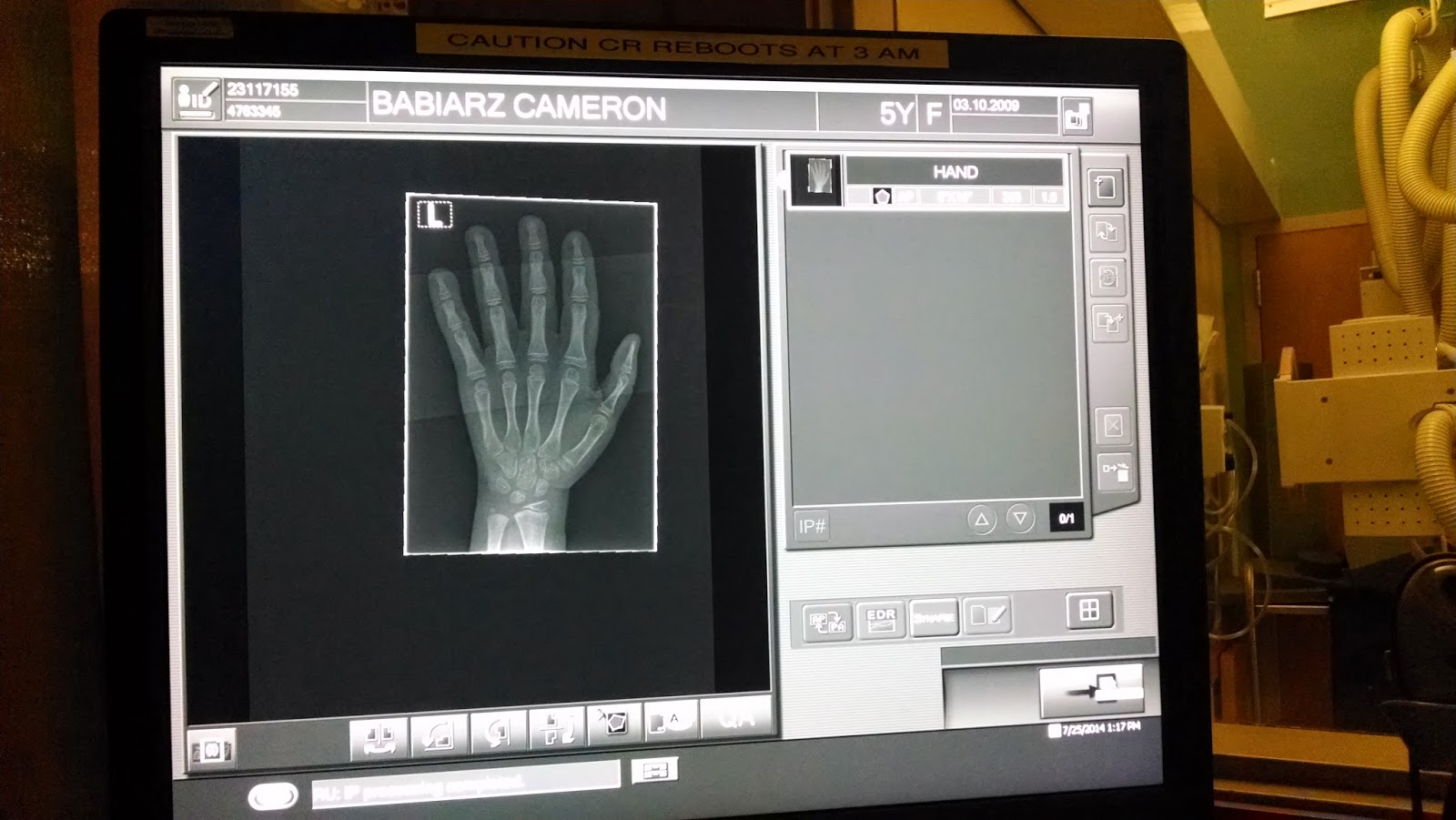 1:30.  That's a wrap!
When we left Boston Children's Hospital, we headed over to the study team's office to pick up a "large package" that was sent to Cammy.  We never expected a box this big!!!! 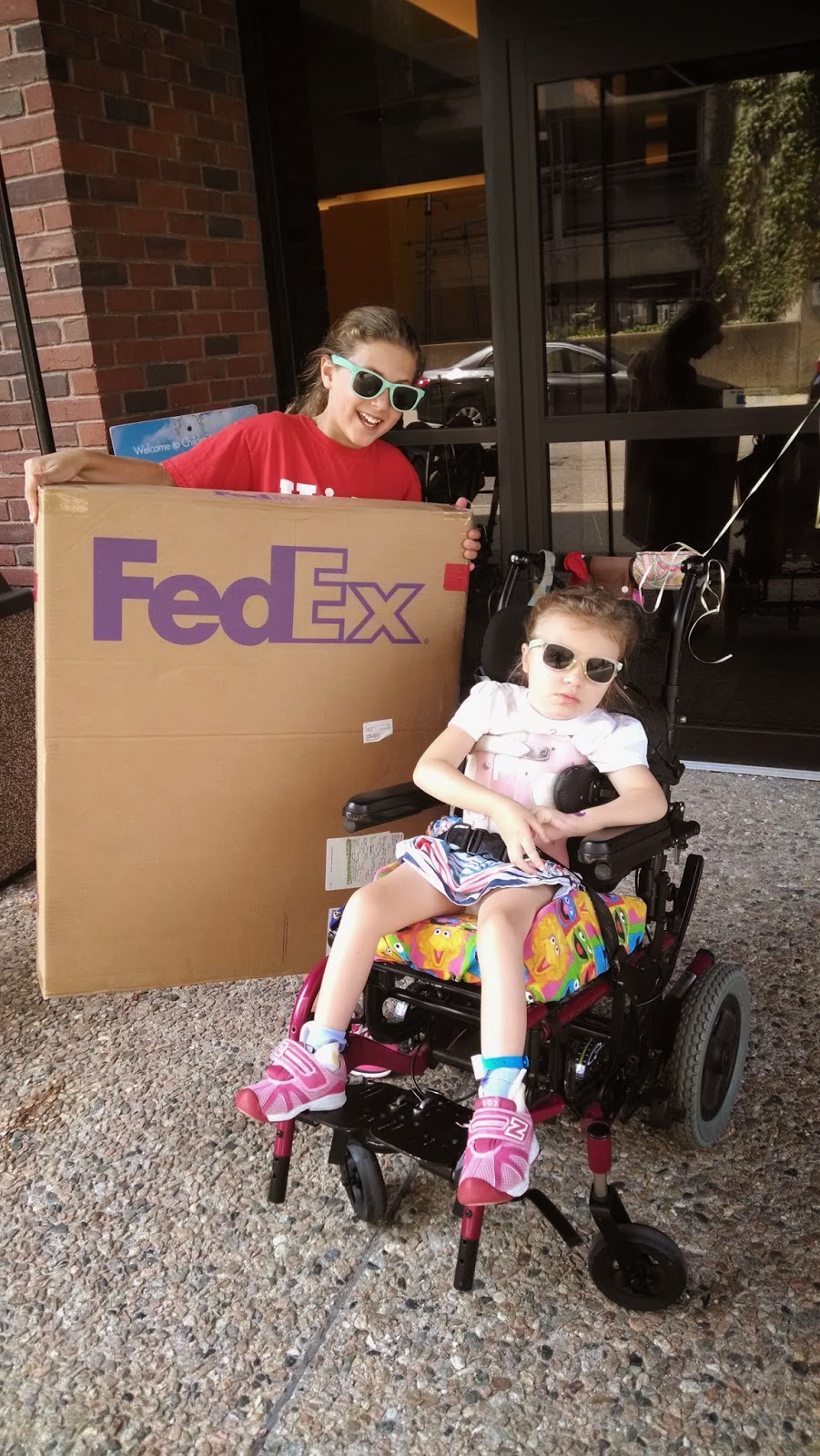 Thank you Sarah Marshall for this incredible thoughtful gift.  Cammy smiled so big when we pointed to the doll that was her and Ryan are so excited that she was a doll too!  Once we got back to the hotel room, we replaced one of the photos on the wall so this could hang.  It's making our room a little more like home.  Thank you. 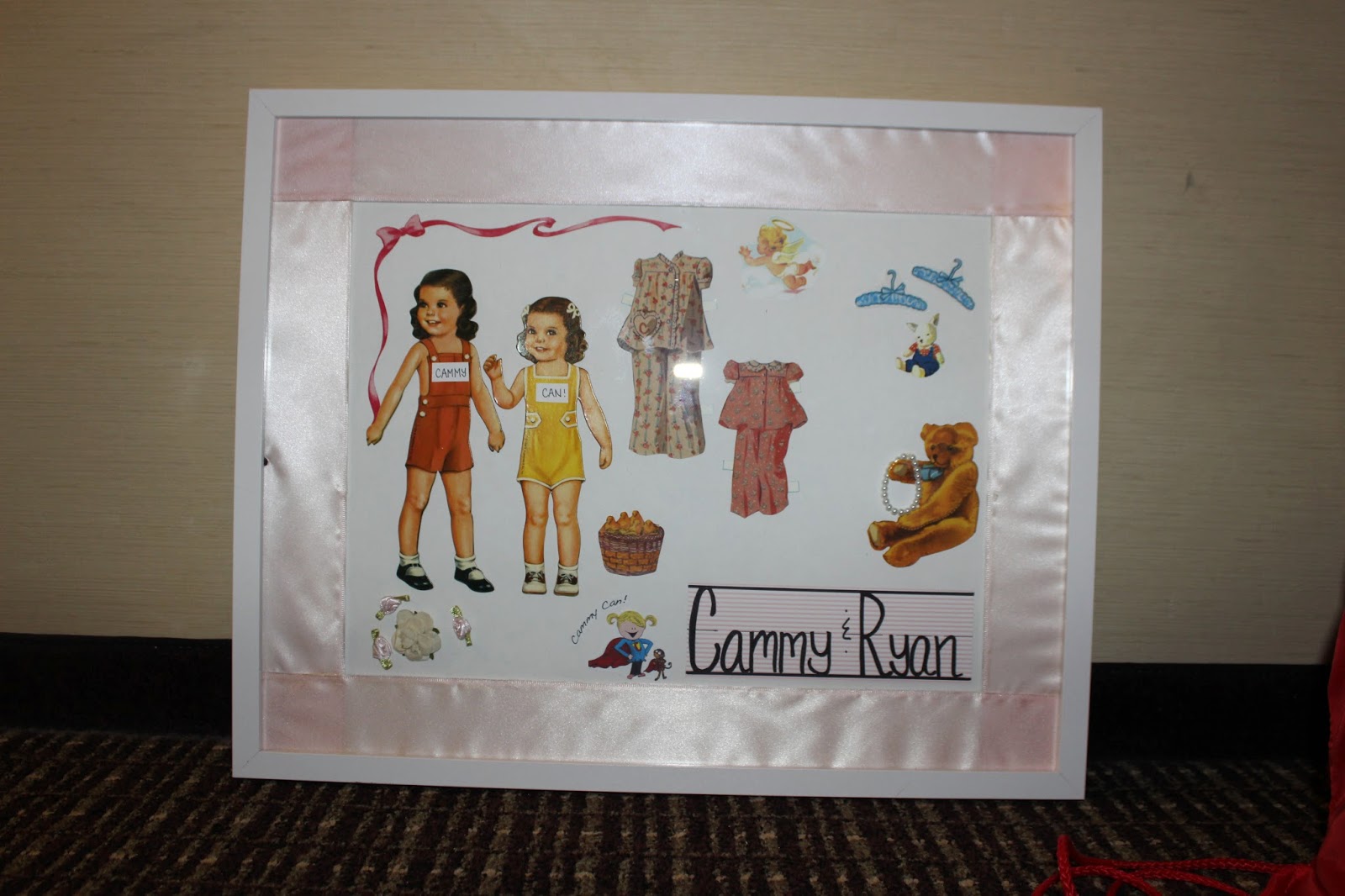 Here are some photos of what Kim, Ryan, Carly and Sydney did during the day.  One goal they had in mind was to take photos in front of each Dunkin Donuts they came across and text it to Grandma Corrado. 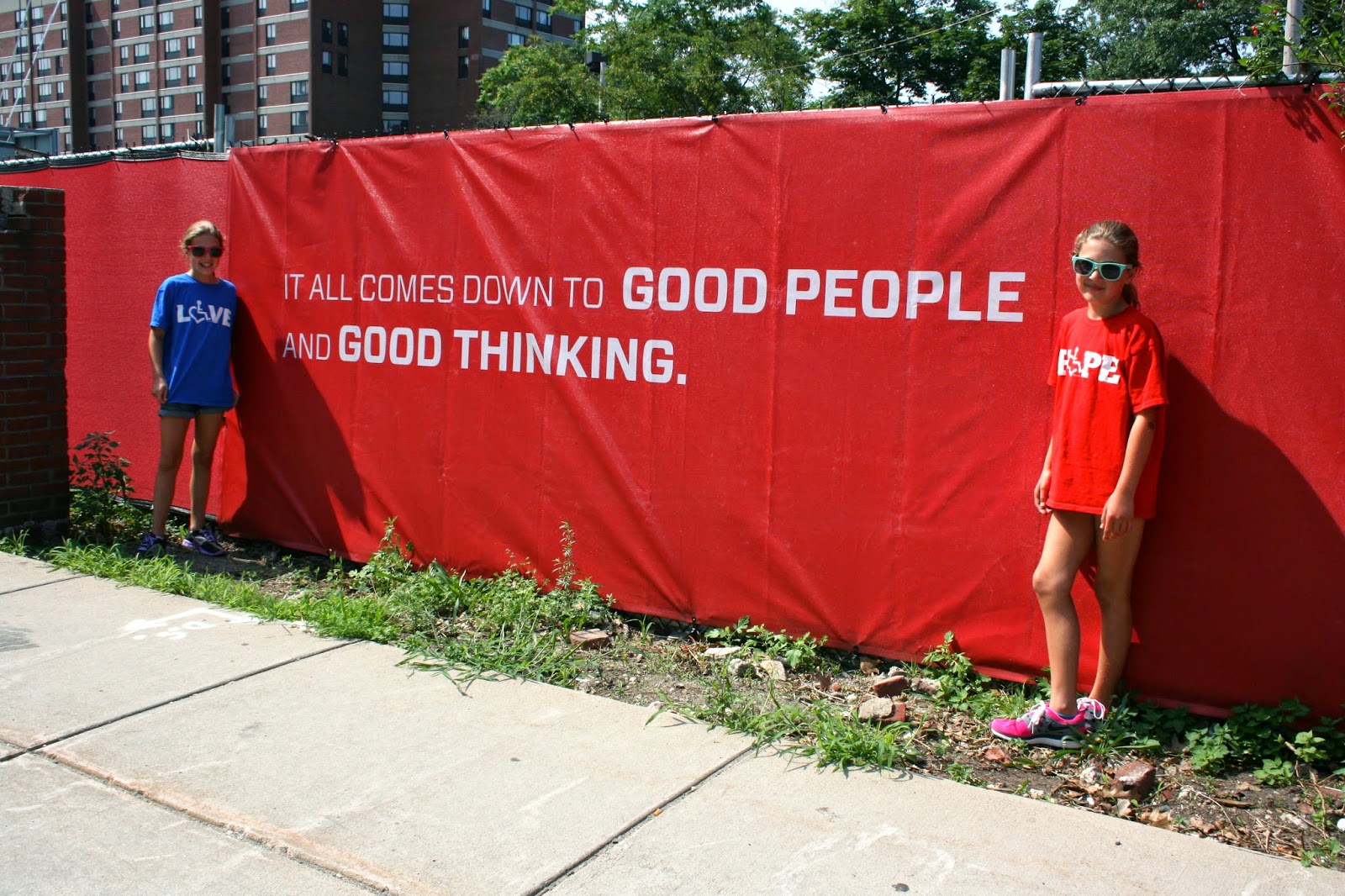 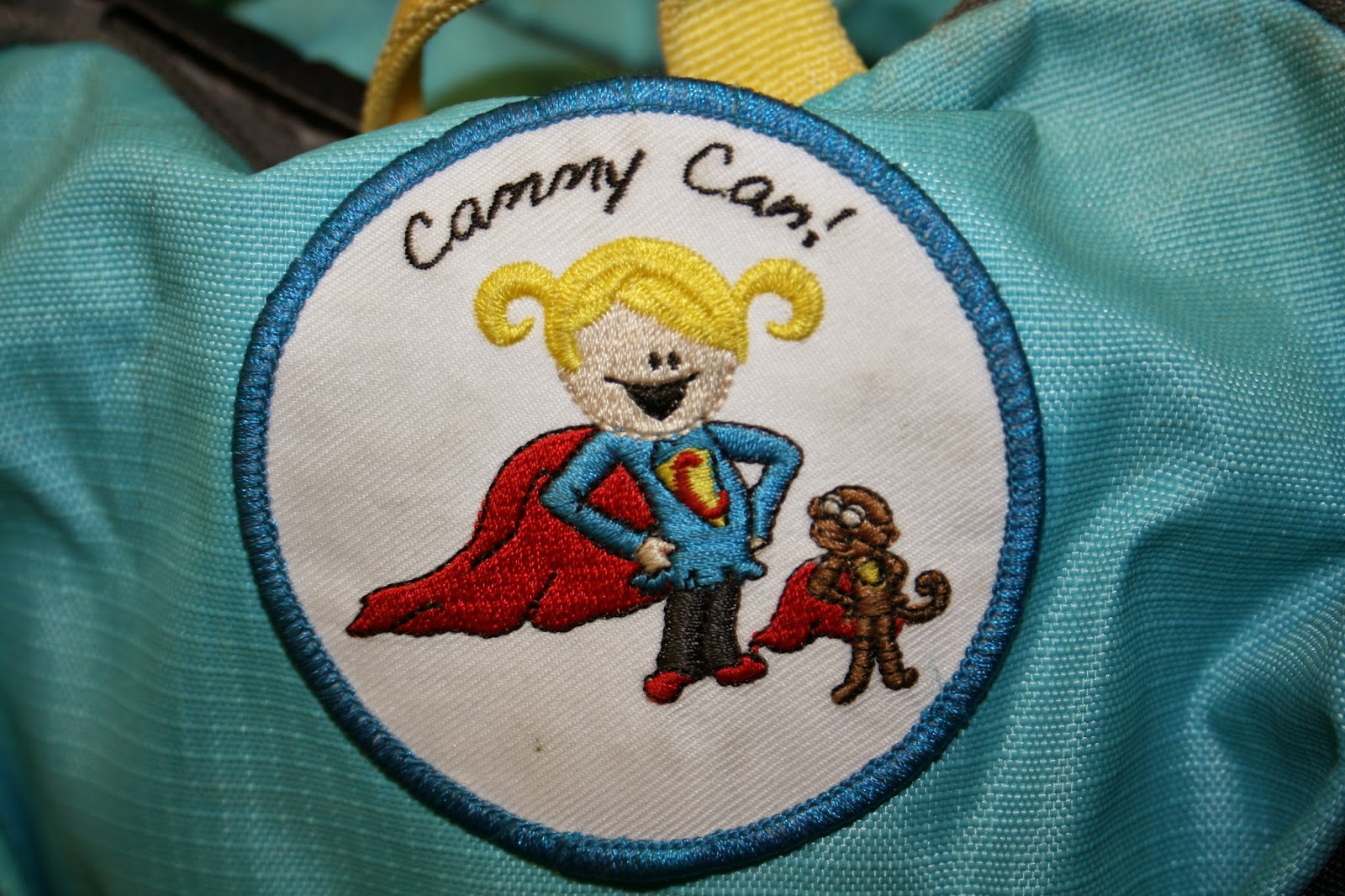 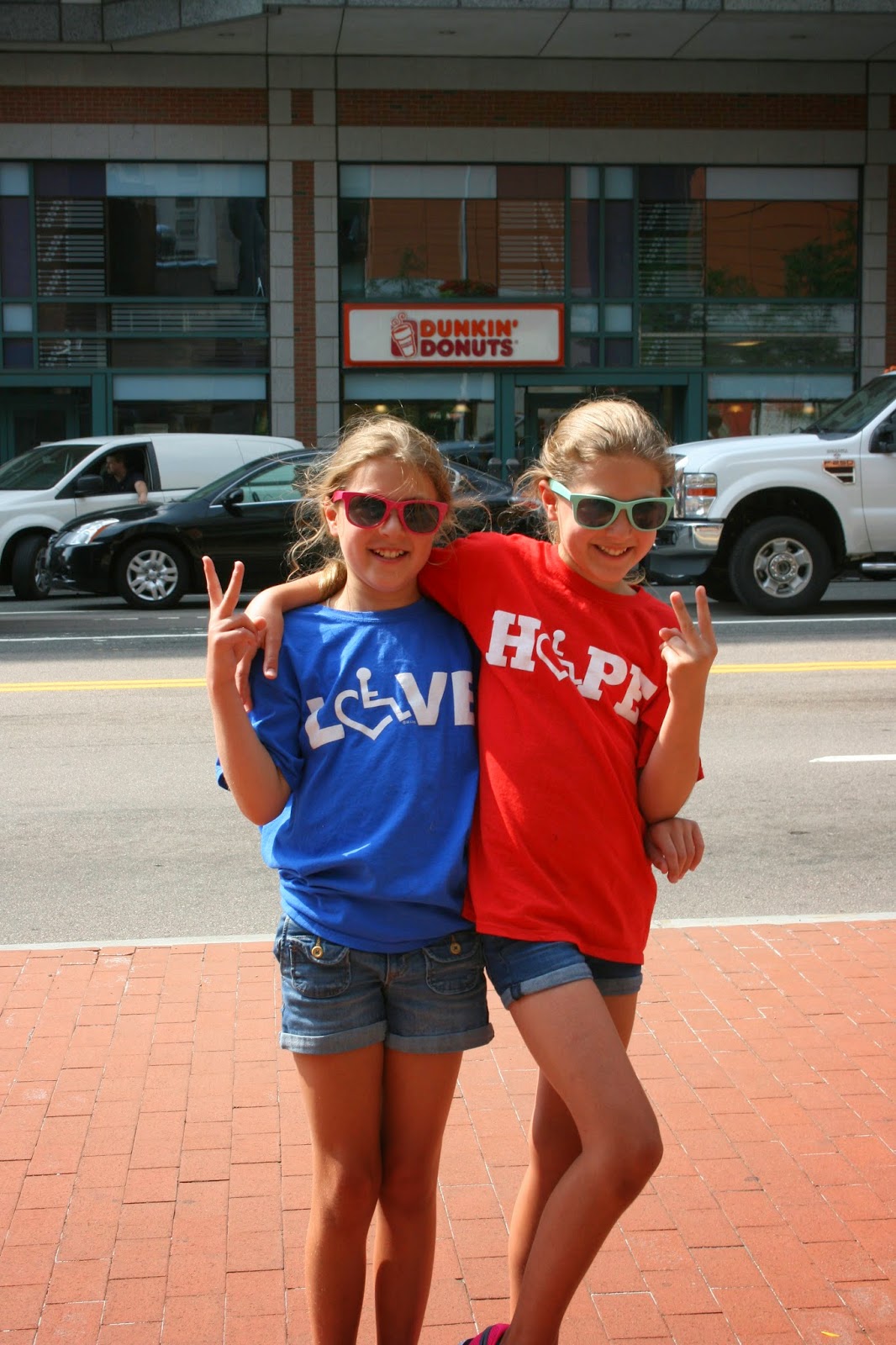 Before bed, it was journal time.  Sydney worked with Ryan this time and Carly worked with Cammy.  I used the PODD book to help Cammy get her thoughts out.  She was spot on about her day.  She knew where they poked her for blood and said how she felt during that time.  The part of this evening's journalling that really got me was that she wanted to know how Carly's day was.  In all of our day to day chaos, trying to figure out what Cammy wants and needs, I always forget that she also wants to have a conversation and ask other people questions.  She wants to know how they are doing.  Cammy sincerely wanted to know how Carly felt about her day.  She looked at Carly when she spoke and really listened. 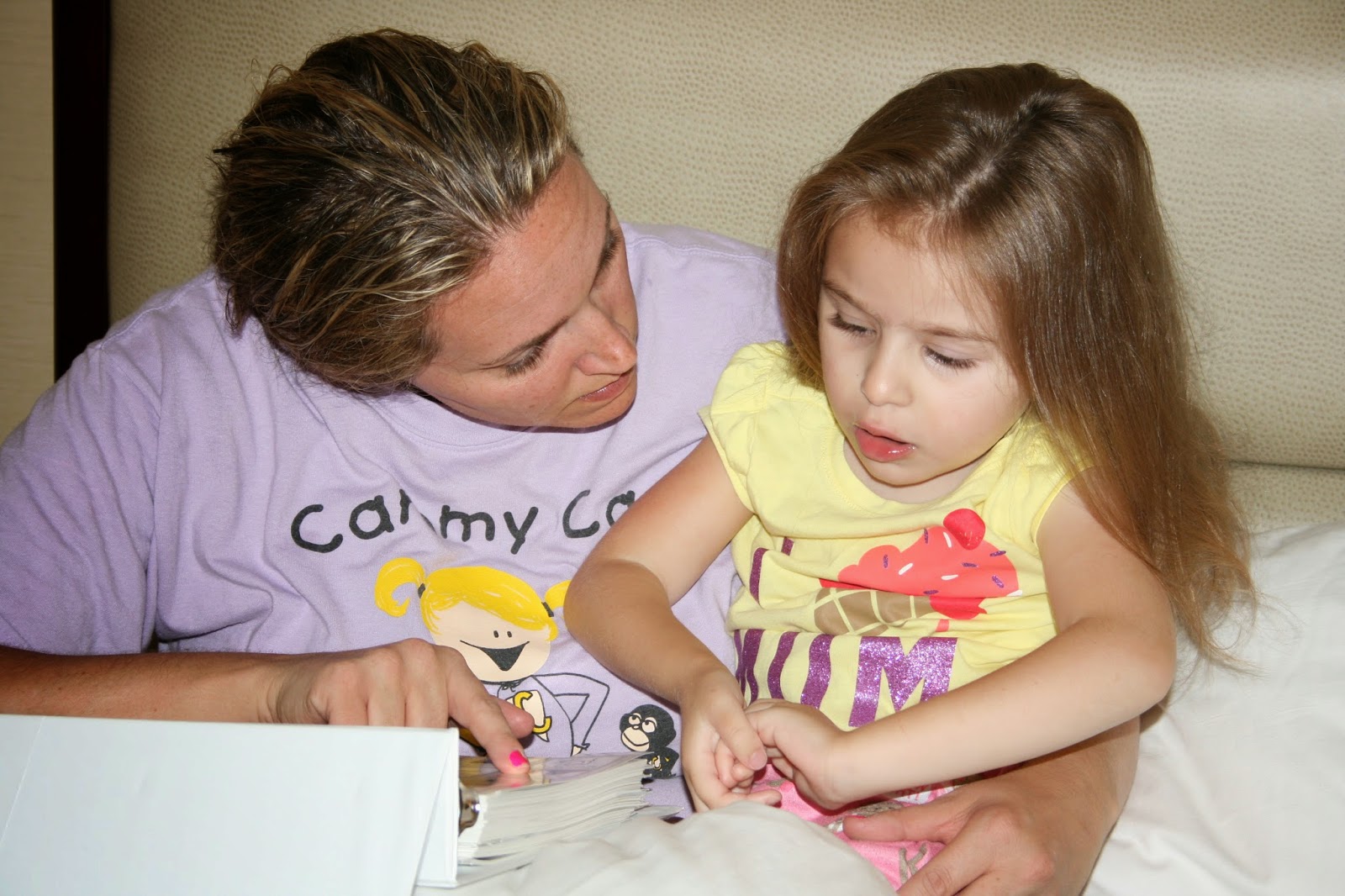 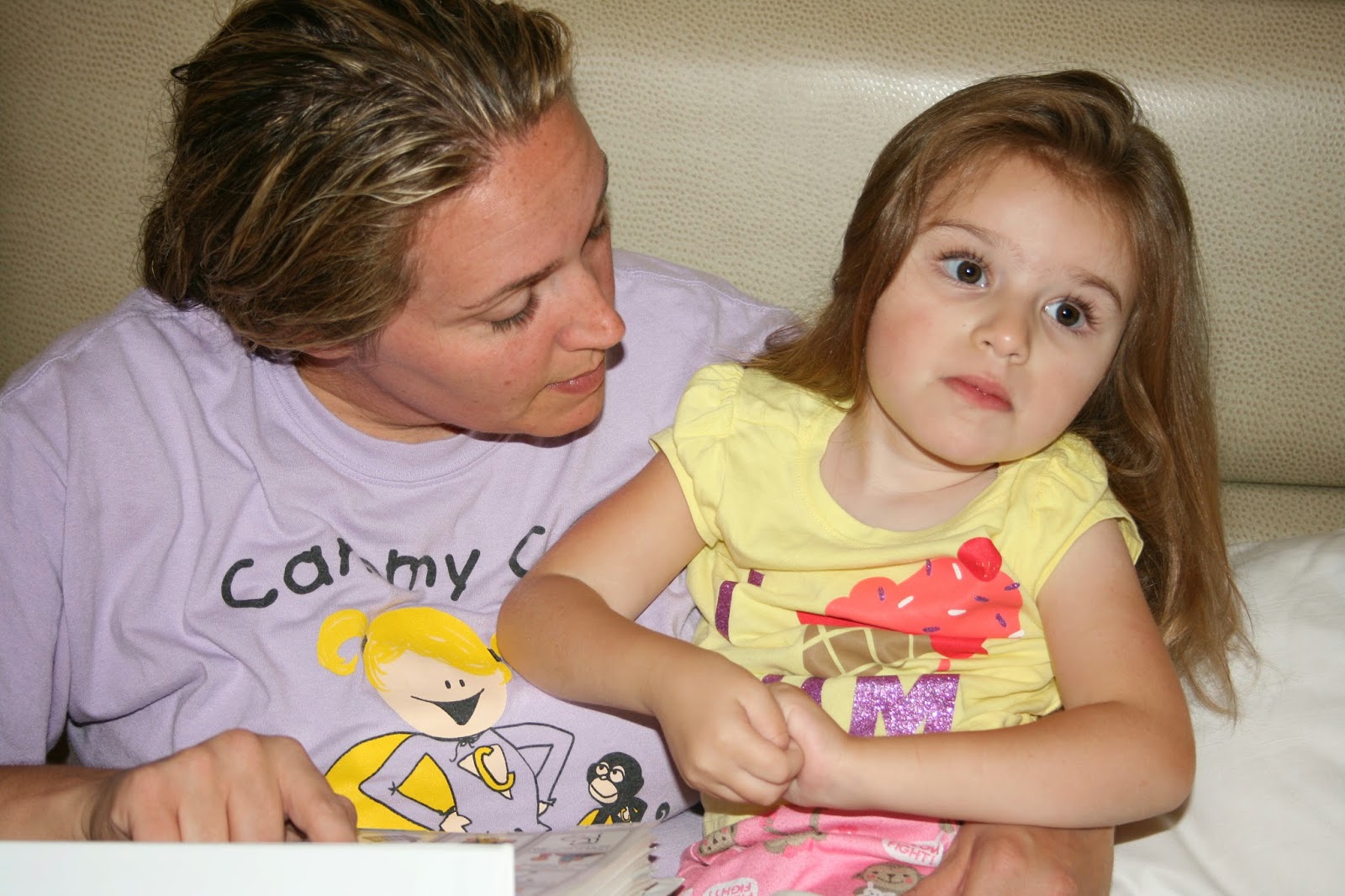 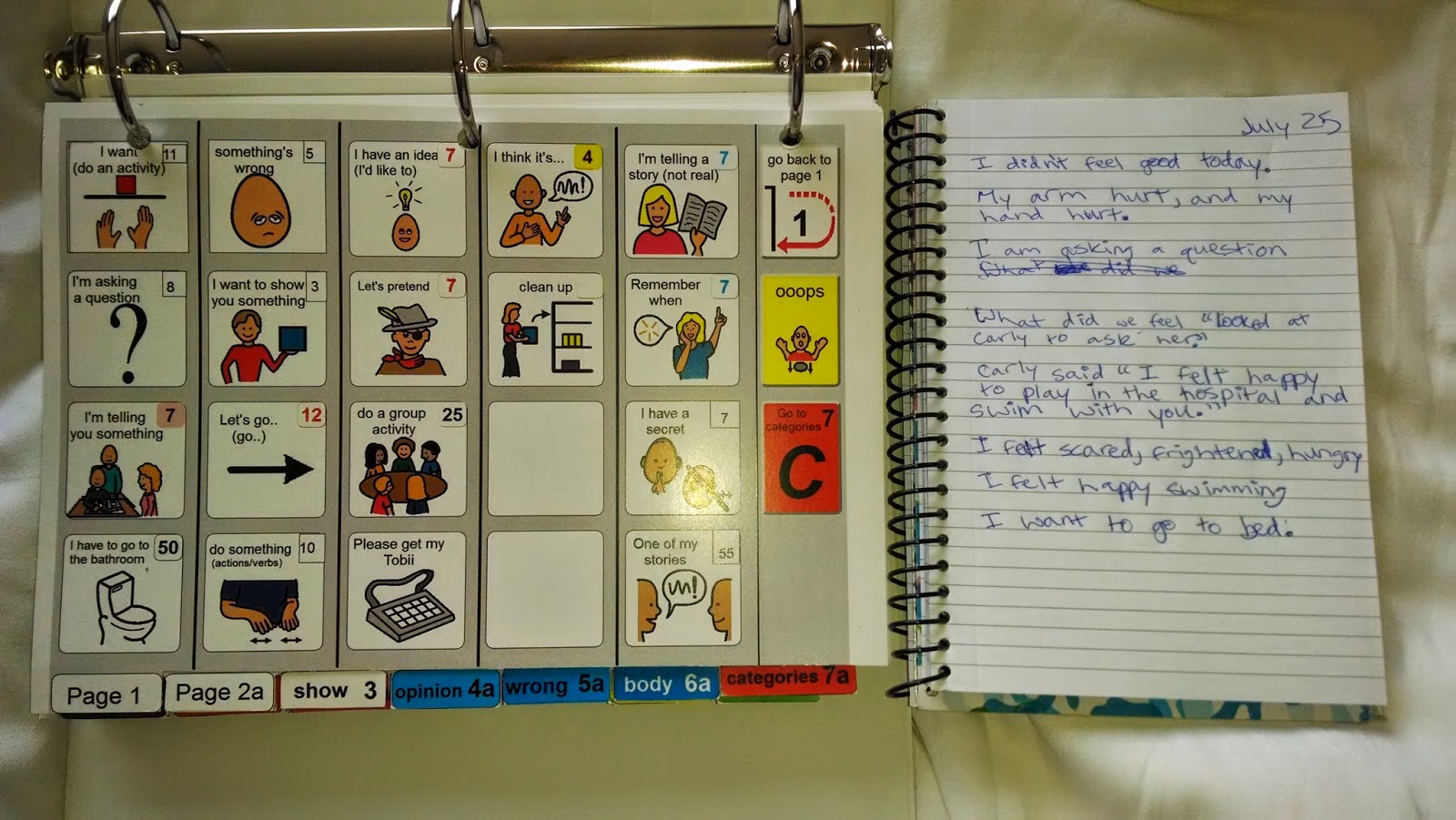 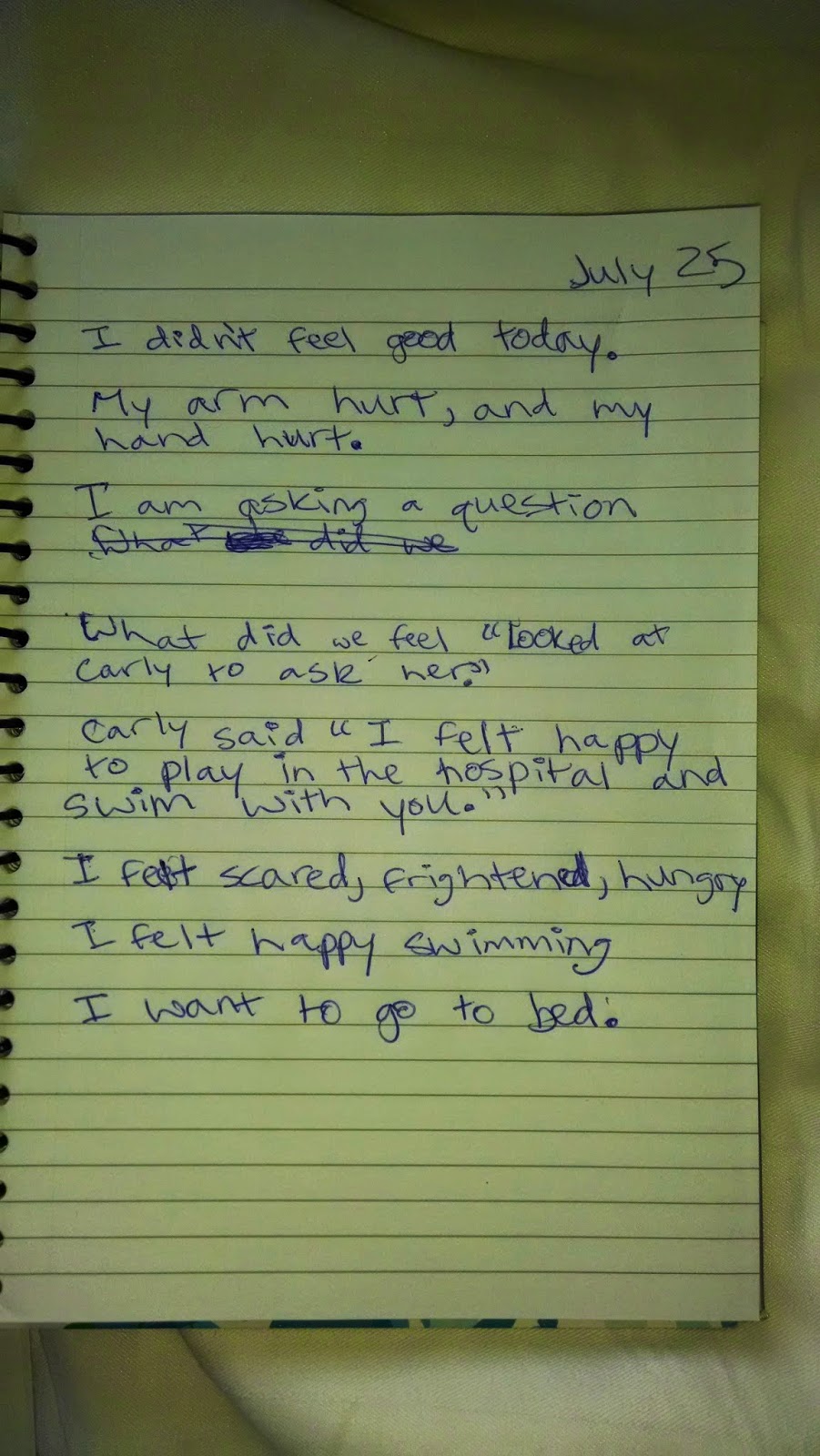 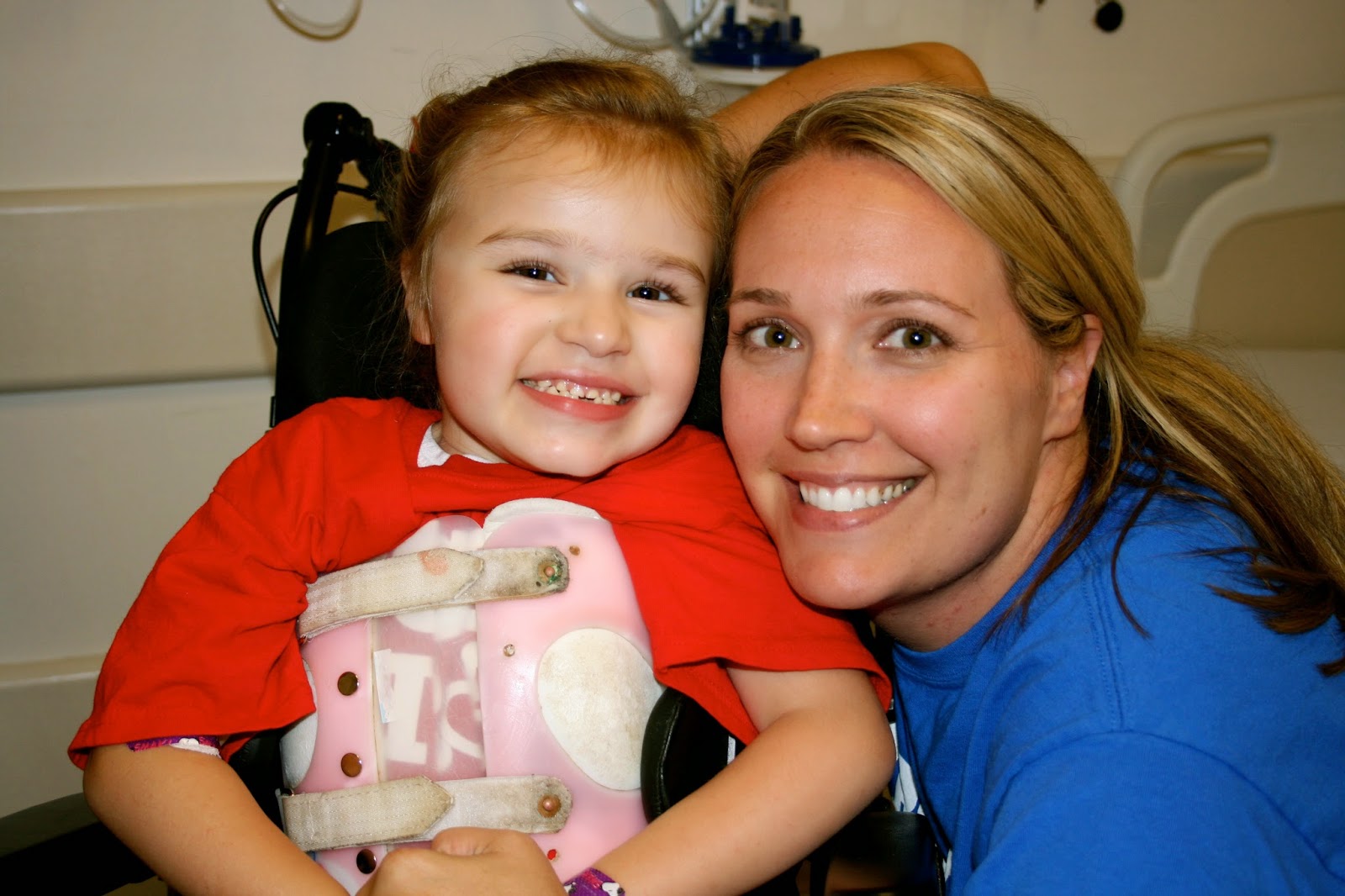 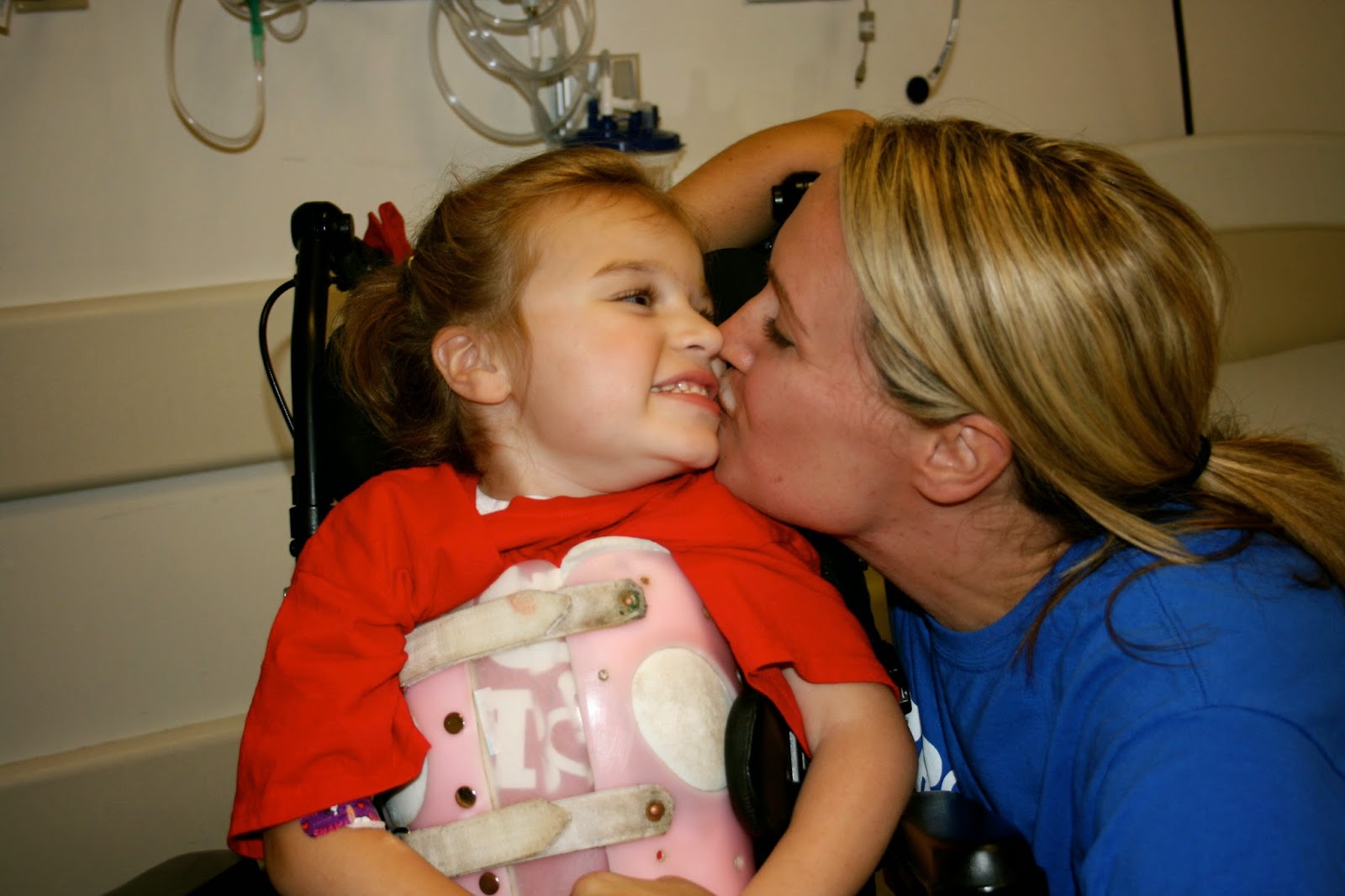