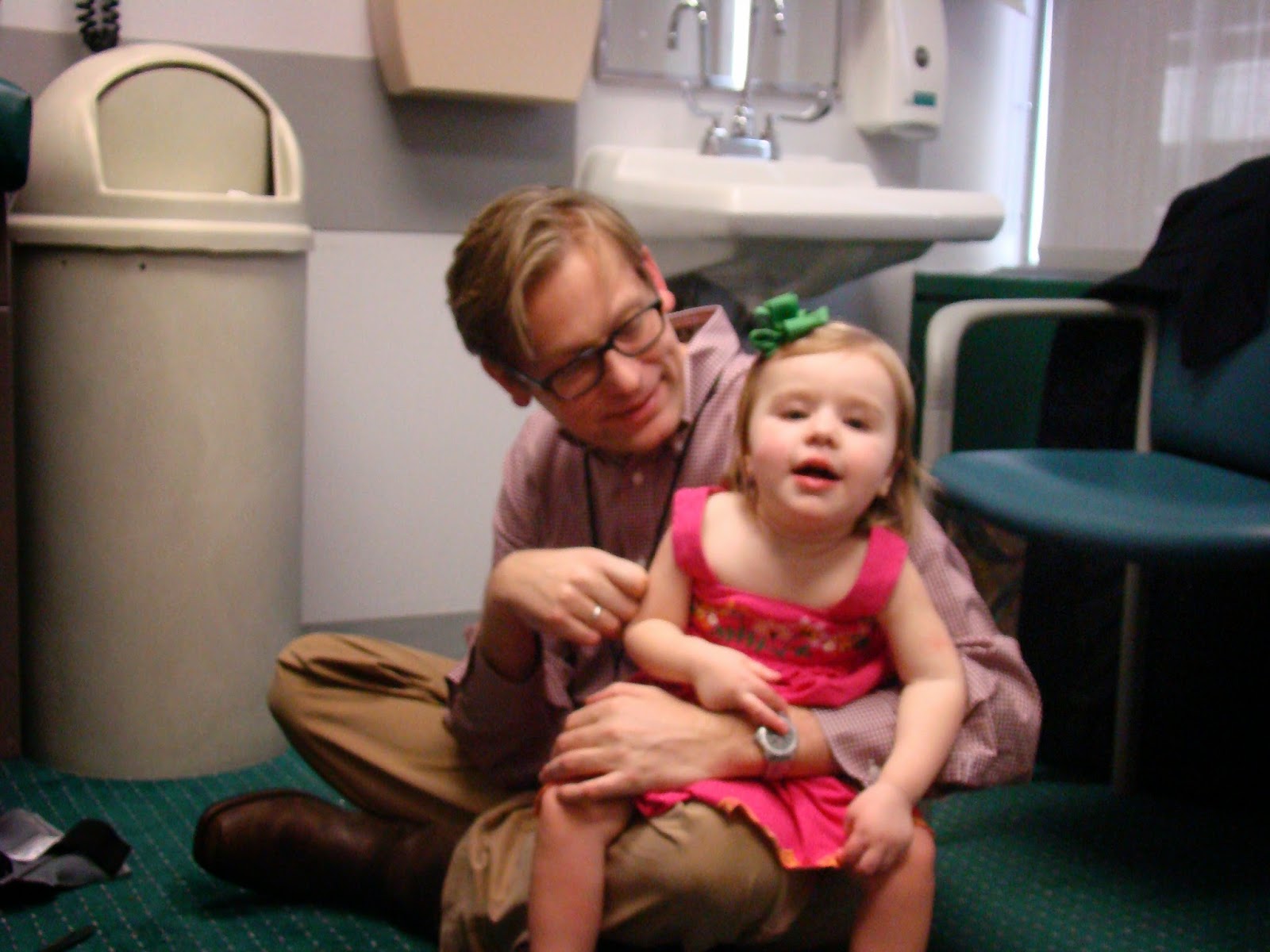 Cameron was a little performer for him.  (My sister who is a PT says that therapists call this performing “the doctor walk” --- kids will all of a sudden walk perfectly fine for doctors b/c they don’t want to see them again!  Ha!)  Cameron was definitely not walking, but she was doing things on cue that I can’t get her to do on a daily basis.   We walked into the room and she did a pageant wave to him and his assistant and they both laughed.  Once she saw him, she couldn’t stop smiling at him (not gonna lie, at some point I made eye contact with Cameron and had a mental message sent to her saying “I hear ya,”  --- young doctor with floppy blonde hair, with a British accent who is leading this charge to fix my baby!).  When they asked if she was vocal, Cameron blurted out “mama mama, baba baba.”  Then when the doctor asked her where her nose was, she grabbed it.  When she did these things for him, he was impressed and I said “I don’t know who this kid is!”  They asked us a whole bunch of questions about Cameron’s history.  Dr. Khawja observed her as she played with a toy and “read” a book, pushing buttons that make sounds, turning pages, etc..  Then, he got on the ground and played with her, he checked her reflexes and stood her up.  She was giggling with him the whole time.  He was so impressed with her eye contact, social skills, and use of right hand.  He said that before we came in, just looking at her mutation, he thought he was going to see a child worse off and he couldn’t believe what he was seeing.  We learned that her mutation is borderline moderate to severe.  He couldn’t believe how high functioning and social she was.  He said that just shows you that there are so many other factors that go into this (other genes and early intervention, therapy, etc.) and we can’t really tell how “active” or “inactive” each of her X chromosomes are.  (One of Cam’s “X” chromosomes is fine and the other is impaired, but we don’t know if it’s working 25%, 50%, etc.  And we don’t know how much the ‘healthy’ “X” is overriding the other one.  The reason it’s primarily girls is because boys don’t have that other active “X” to survive.  And the distribution of protein in the brain is randomized which explains why 2 girls can have the same mutation, but only 1 might be able to walk. – I hope I explained that okay, I really need these things dumbed down for me!) 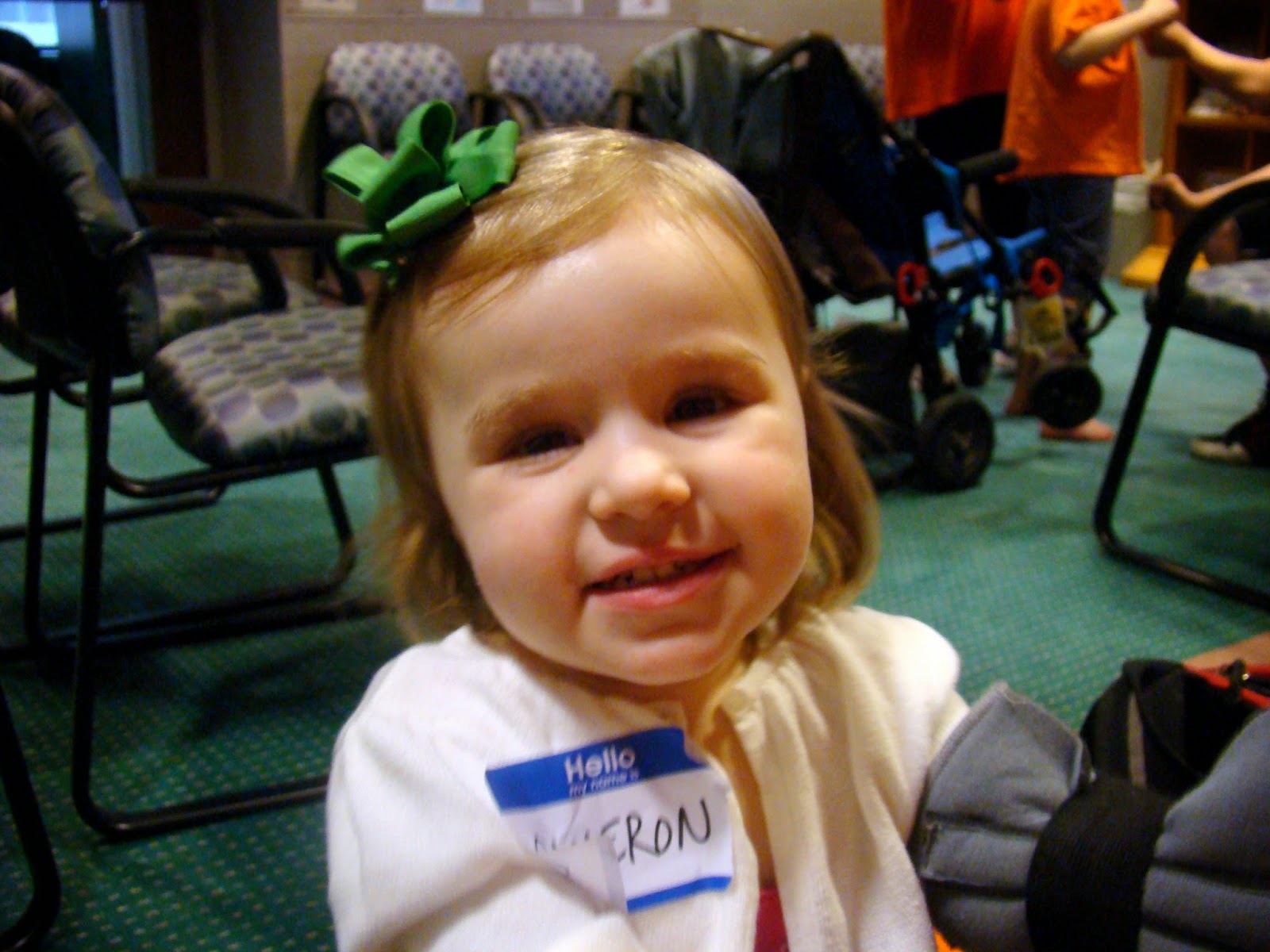 Here’s the awesome news…. Dr. Khwaja said that Cameron is at the tail end of the regression phase!!!!  I can’t even explain to you the weight that was lifted off our shoulders hearing that.   I, of course, started crying hearing that.  When I asked how long after the regression phase they start regaining skills, he said about 6 months after.  He said Cameron probably has already started regaining skills, we just don’t notice the little things because we are around her 24/7.  But we actually have seen more progress lately, it’s small and will probably always be very tiny steps, but it’s progress!  All of our therapists have noticed progress too.  He was impressed with her core strength once her muscles were active. He said Cameron has good potential to walk.  Ahhh, more good news!  We know it might not be until 3 or 5 or 7, but she could walk!  This was all so reassuring that everything we are doing for her us working!

There were about 15 other families when we were there.  There was quite a range.  We were told a couple of times that our young girls will look so different in 10 years than the 12 year old girls look now because of all the medical advancements and early intervention (therapies) we have now.  About 80% of the girls were walking.  Some spoke words and some used their hand very functionally.  We needed to see these things!  There was an 8 year old there that I kept staring at trying to figure out why she was there.  She was running around, using her hands perfectly fine.  She was such an inspiration to see.

We found out that a clinical study has been completed in Italy. Dr. Khawja had received a call last week at the completion of it and said there were some very good results (we don’t assume a cure, but probably alleviating or reversing some symptoms).  He is going there in June to see the girls and find out more.  The second phase of the clinical trial in Boston will take place in the fall.  They are accepting 30 girls to be part of this study.  Cameron is one of the youngest girls now part of this Natural History Study.  This clinical trial is looking for girls between 2-12.  We think b/c of her young age; she would be a good candidate.  We want to learn more about this in May.  We know that if she was accepted, we would have to go to Boston once a month, but don’t know for how many months.  The other part that makes us waver is that it’s a blind study, so some girls will be getting the drug while others will be getting a placebo.  She might not even get the drug.  We found out something interesting about the drug being used.  We knew that the drug IGF-1 that is given in these trials is FDA approved, but we didn’t know what it was currently used for.  He said it’s given for “shortness,” a growth drug of some sort.  Interesting, huh?

We are anxious to go to Boston at the end of May for the National Rett conference to continue learning more to help Cameron reach her full potential.

I can’t tell you how much we needed Sunday!  I was in a slump and this was the adrenaline rush I needed.  It was so positive and hopeful.  Thank you so much for all of your love and support.  Please continue to think of us.  We know we still have a long road ahead of us.

Next up is the strollathon on May 14! 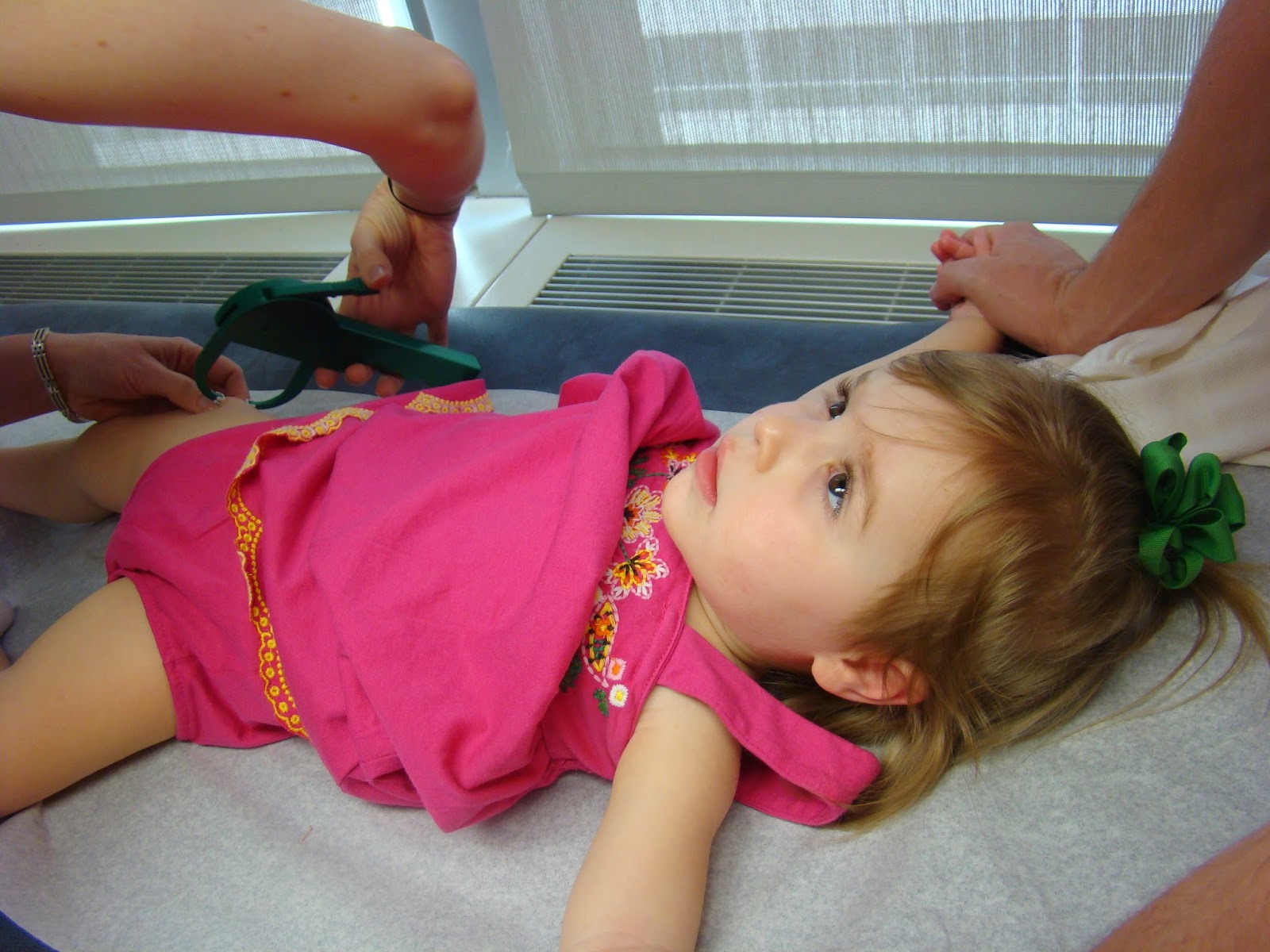