I live in fear.
A year ago, Cammy's pediatrician advised us to always video any behavior that was not normal to show him.  This morning, we had quite a scare.  I rushed Cammy to his office and videoed her odd behavior in the waiting room.
Around 8:10 this morning, Cammy threw up, started to sweat bullets (she rarely sweats in general), turned white as a ghost, her eyes were closed and she didn't respond to her name.  Her body seemed to shut down, but she was still breathing. It was the scariest thing I've ever seen from her. I called the Boston crew to report what happened.
With the injections, we need to give her something sugary before the injection to make sure her glucose levels do not dip.  Her levels have been normal so far.  I was already nervous that Cammy was refusing breakfast, even more so, her drink. When she refuses to eat or drink, it usually indicates she does not feel well.  But I was so nervous to give her the shot on an empty stomach, I was forcing it in (bad move, mom, I should know better).  The Boston crew thought she had a little bug instead of a reaction to the shot.  They wanted me to take her to the doctor to see if she had a virus from all the traveling we had done.  This still didn't make me feel any better about what I was seeing.
I was about to call an ambulance when my sister arrived to take Ryan and Cammy responded to her when Joanne picked her up.  Cammy's eyes opened and she tracked me. When we got to the doctor's office, she threw up again, which got our appointment moved up quicker.
This video is in the waiting room at the doctor.  Her eyes are closed and her leg is twitching.
Cammy's blood pressure was low, she didn't have a temperature and her tonsils were enlarged and red.  After a few minutes (and Sesame Street on the IPad), her eyes opened and some color came back.  The strep test was negative, but the pediatrician didn't like how she looked still, so they sent us to the ER. The doctor called ahead to tell them we were on our way and even gave her the numbing cream at her office so it would have kicked in by the time we go to the ER for blood work. 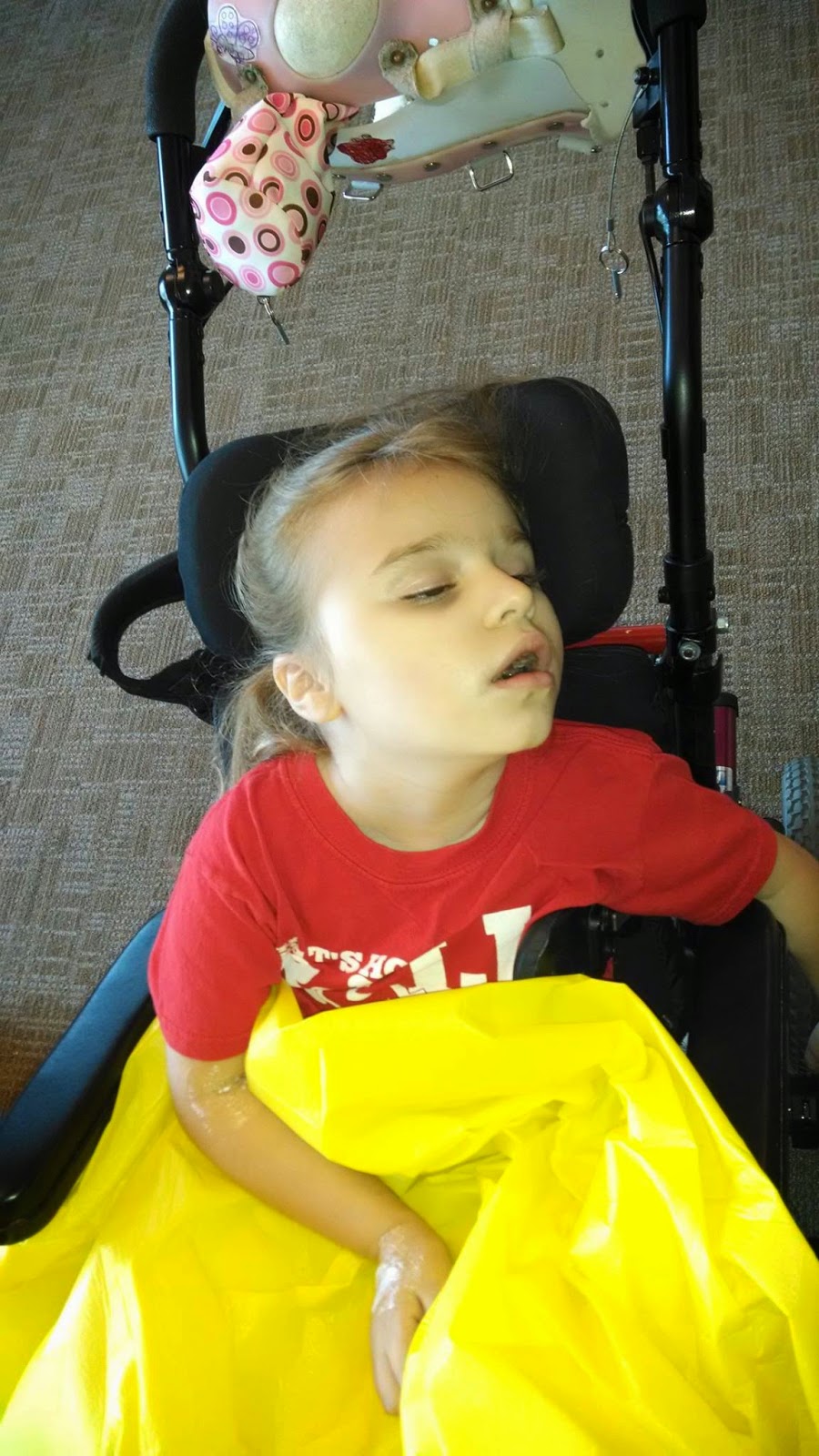 At the ER, they took blood and urine.  She finally smiled at one of the nurses and started tracking more people with her eyes.  The IV gave her more color in her body.  They took a chest X-ray. The blood work showed elevated white blood cells.  She's been on an IV since 10 am.  She has since perked up back to her normal self, but they want us overnight to make sure she remains at her baseline.  Hopefully all levels will even out and we are home tomorrow.  Just a bug.  An IV of fluids would recharge our little superhero. 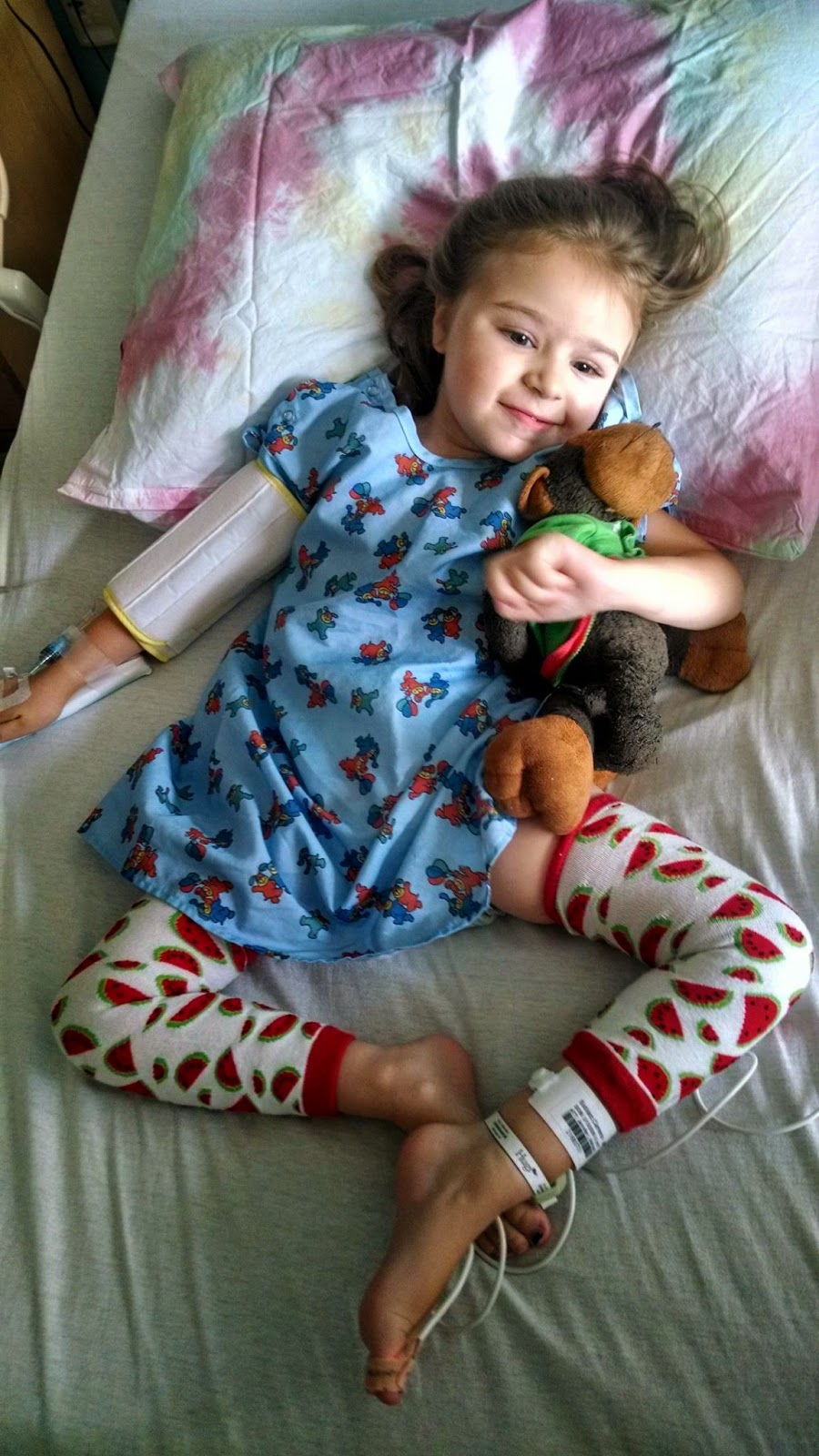 I was actually relieved to hear it was a bug because all morning I was worrying it was a side effect of the injection.  Cammy had tolerated them the past 3 days, then this strange incident happened 40 minutes after her morning injection.  I was crying, thinking "What did we just sign her up for?"  "What did I just do to her?"  concerned this was due to the injection.  We think she caught a little bug from all the traveling.
The evening injection went smoothly and her glucose levels were normal.
The next morning, Cammy ate some pancakes with syrup before her shot.  Her glucose levels were normal.  Cammy was discharged by noon.