Today, I was excited to divide and conquer.  Billy took Cameron to the office for the Mullen Scales of Learning Assessment.  They had blocked off 3 hours to administer this exam.  So, Ryan and I slept in a bit, had a leisurely breakfast and before we could leave breakfast to go swimming, we got a text that Cameron was already done with her test!  They had blocked off 3 hours, but she finished in less than 1.5 hours. Before we jump for joy that she's brilliant, please understand that there were 4 parts to this assessment and two parts were over pretty much as soon as they began.  In this assessment, if Cameron gets 3 wrong (zero value), that portion of the test ends.  The FINE MOTOR portion (which measures visual-motor skills and motor planning) was over very quickly, as we all know she has no function hand use.  The EXPRESSIVE LANGUAGE (which measures the ability to express verbal concepts through language WITHOUT use of the Tobii) was over pretty quickly as well as Cameron can put a few letters together to verbalize such as "MA" "BA"  and the occasional "DA" "LA".  A third portion was the VISUAL RECEPTION (which measures visual processing and organization skills).  She got pretty far in this one. The fourth part was RECEPTIVE LANGUAGE (which measures language comprehension and auditory memory).  Cameron made it to the end of the Receptive Language portion! 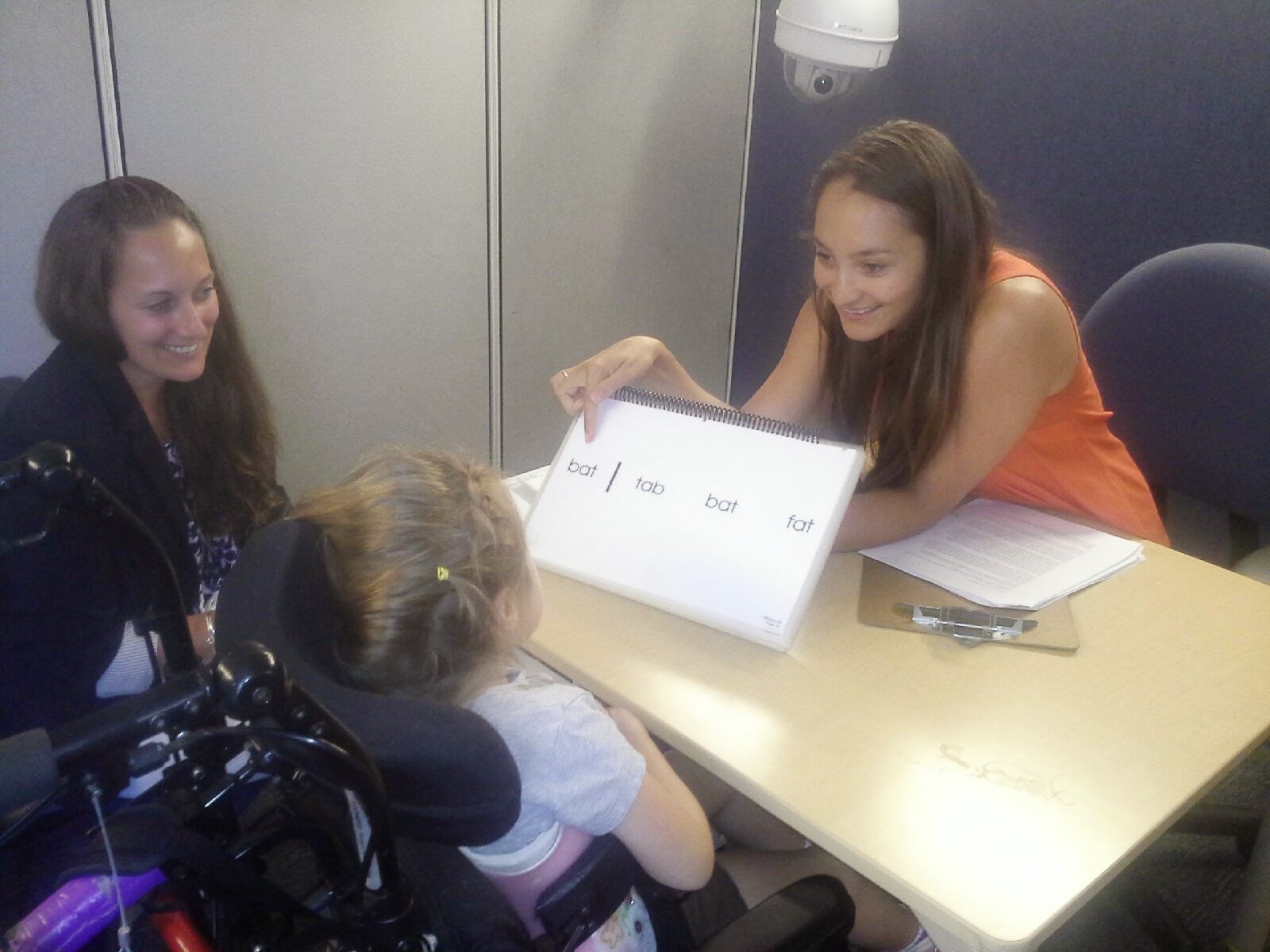 Since Cameron finished so quickly, it opened our day up quite a bit.  We went swimming, had lunch and rested a little before our fun night out.
We had been here before, so we knew the subway was pretty easy to navigate with a wheelchair.  We walked to MIT campus to catch the Red Line to meet Kim and the Twinks for dinner at the North End. 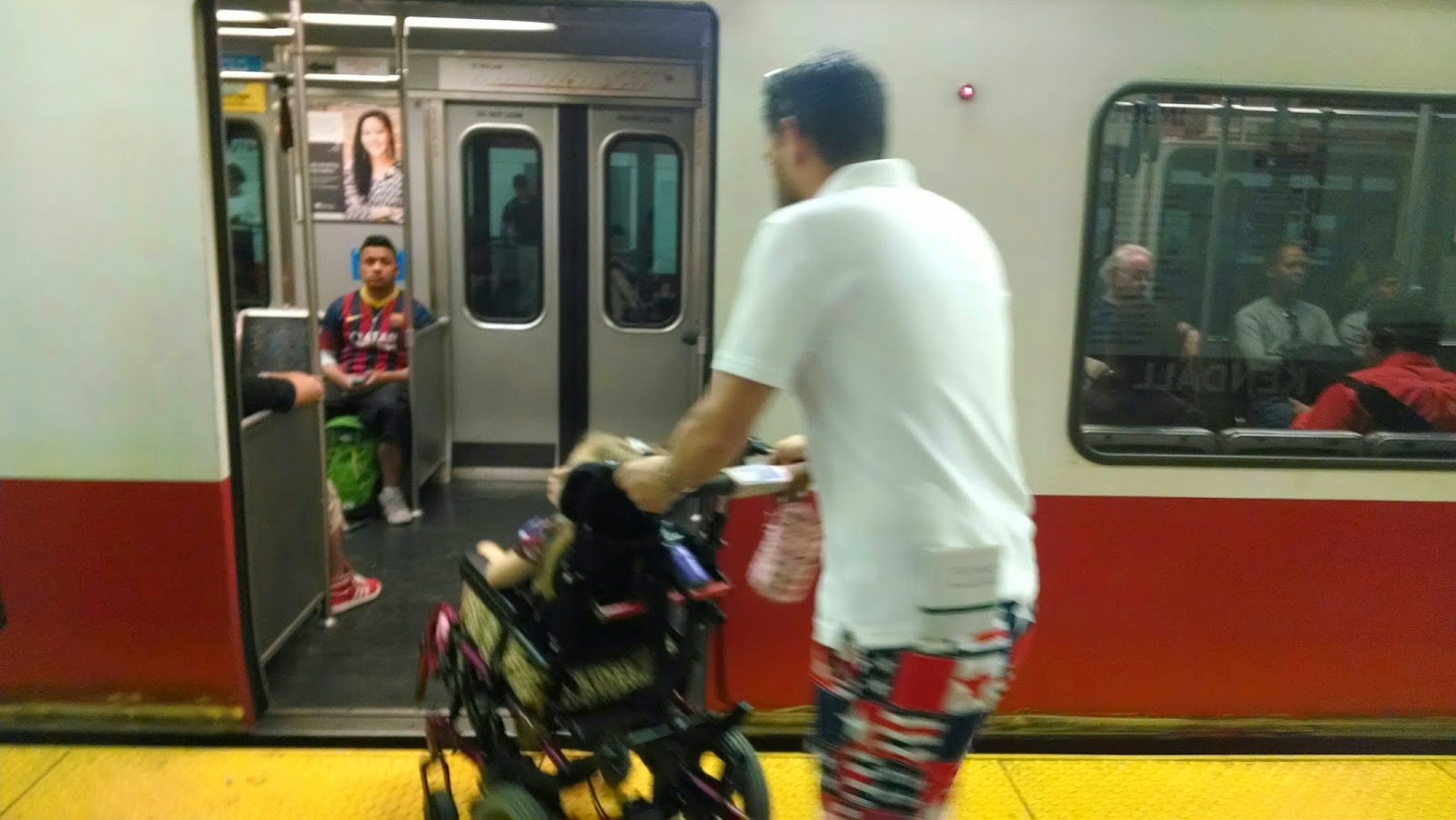 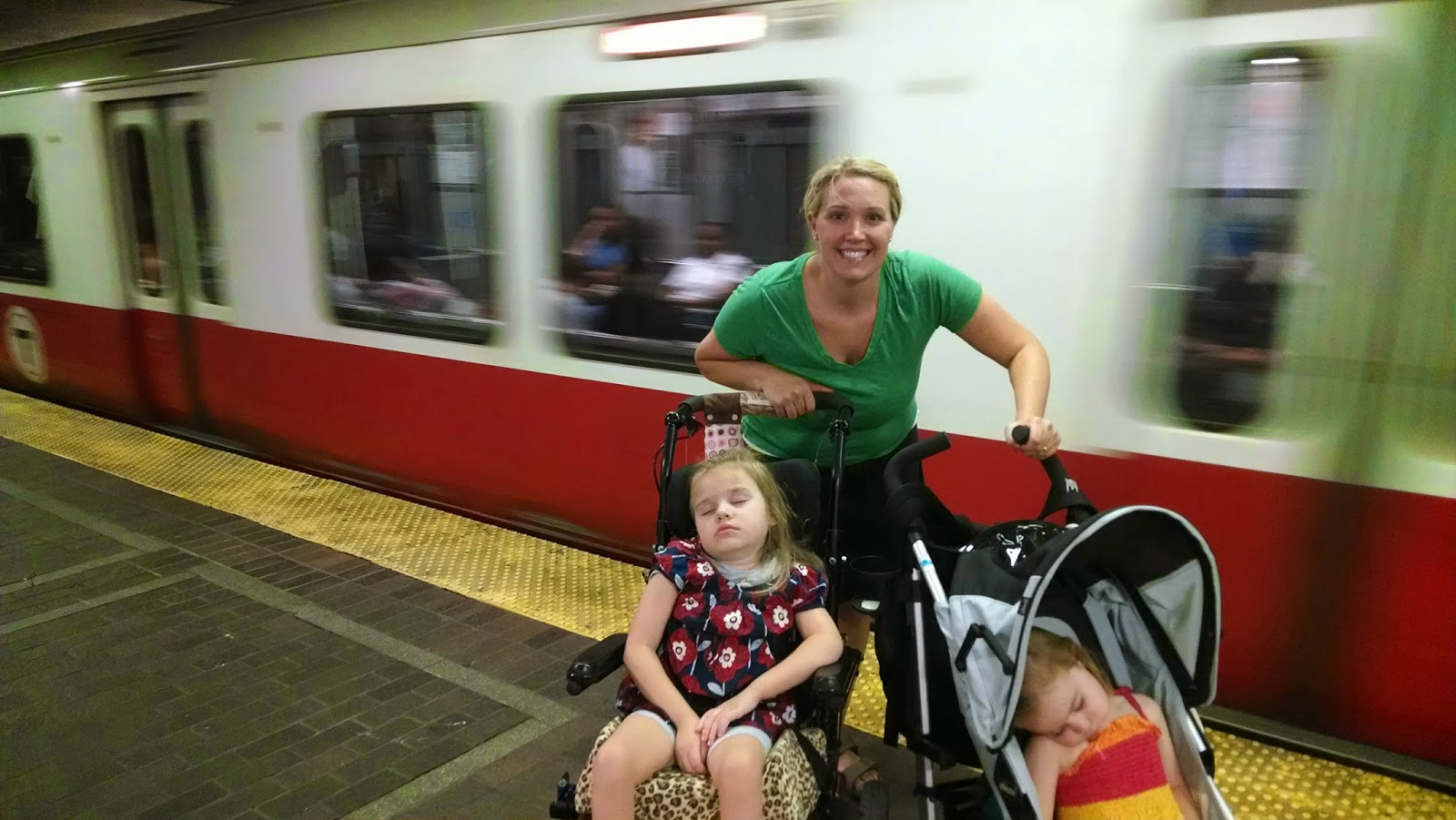 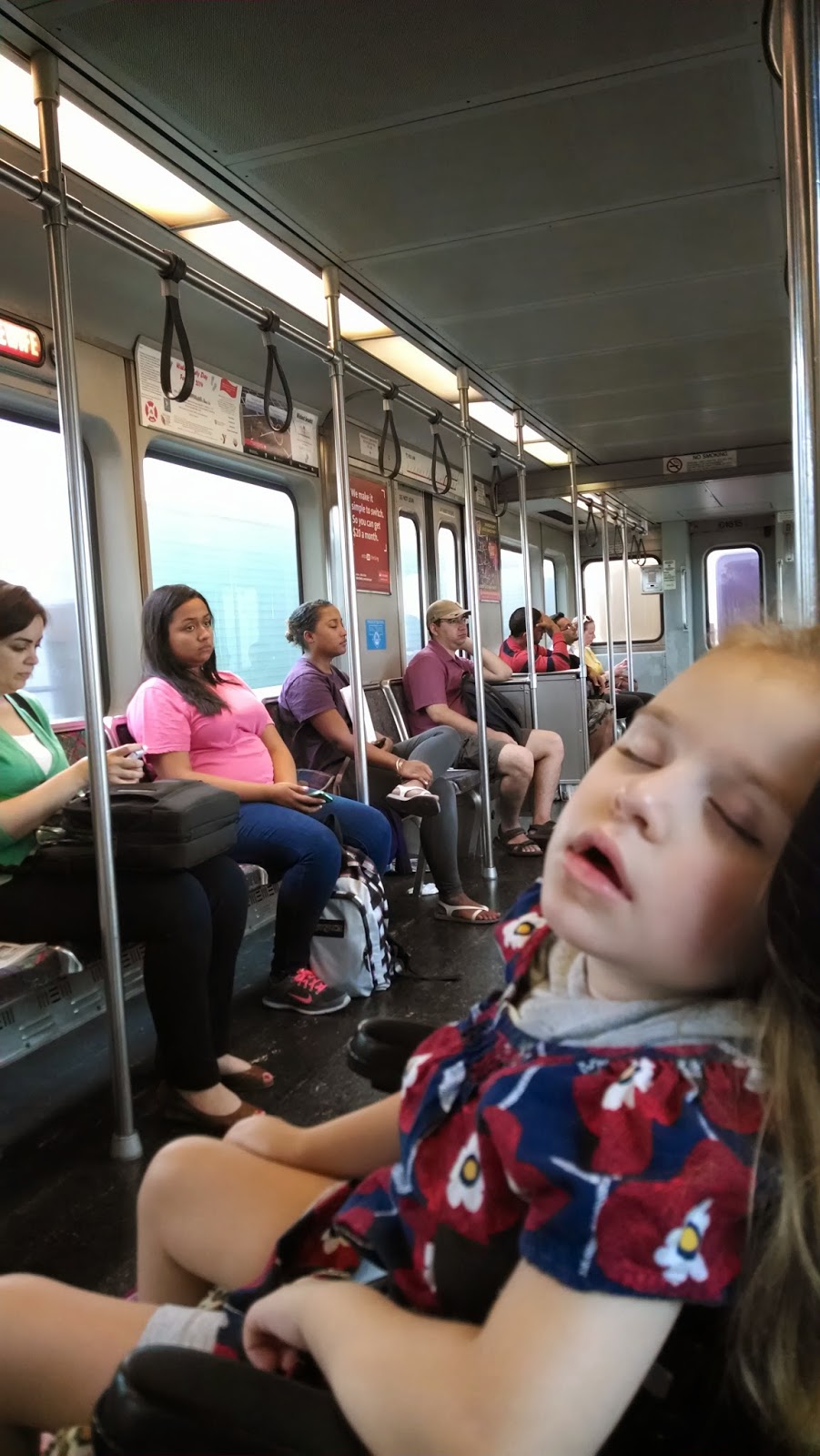 Carly and Sydney's only request this entire trip has been to get some good seafood pasta.  So, we let them pick the restaurant.  Ryan and Cameron were thrilled to eat pasta.  I'll put my tiny twin 11 year old nieces up against most grown adults in a glutenbowl contest. The waiter said it was enough food for four adults. These two polished off a Power Up Platter. After dinner, we had to see what all the rage was about Mike's.  We kept seeing people carrying Mike's boxes all around and the line went outside and down the street.  We ordered a couple scoops of ice cream and a few cannolis.  Since Cameron doesn't tolerate ice cream very well (it's just way too cold and it always touches her teeth), we thought the cannoli might be a good replacement.  She definitely approved! 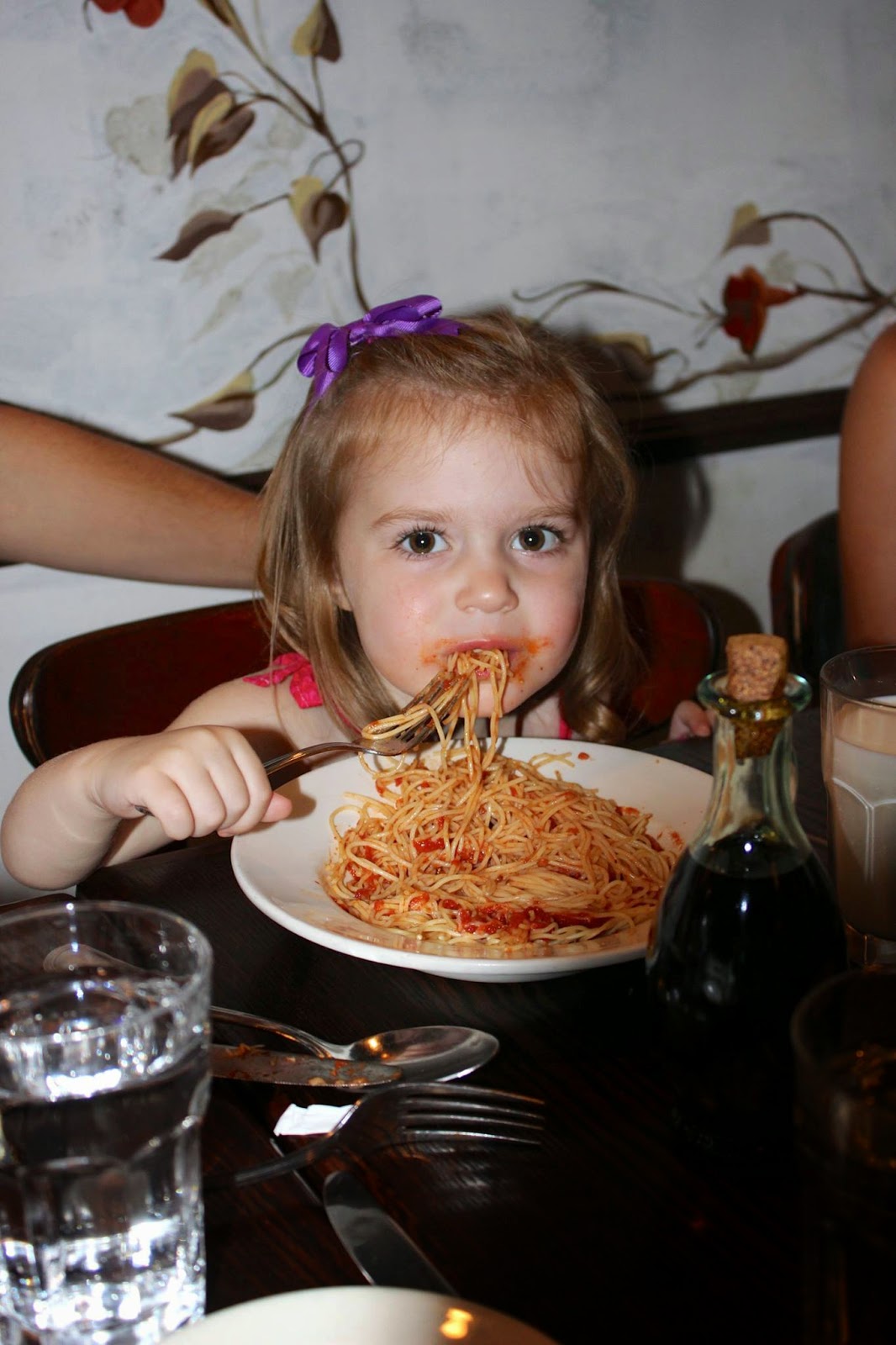 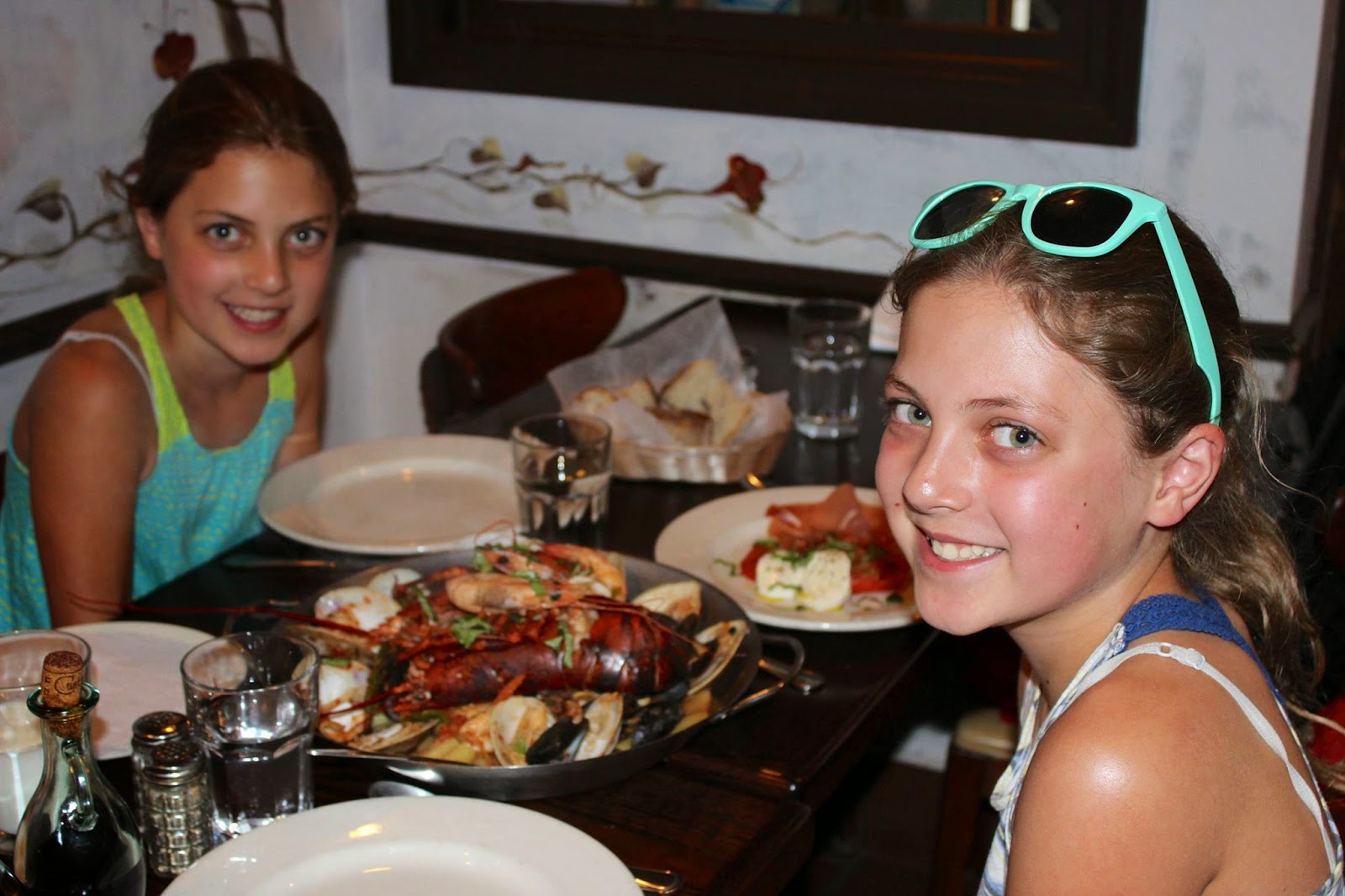 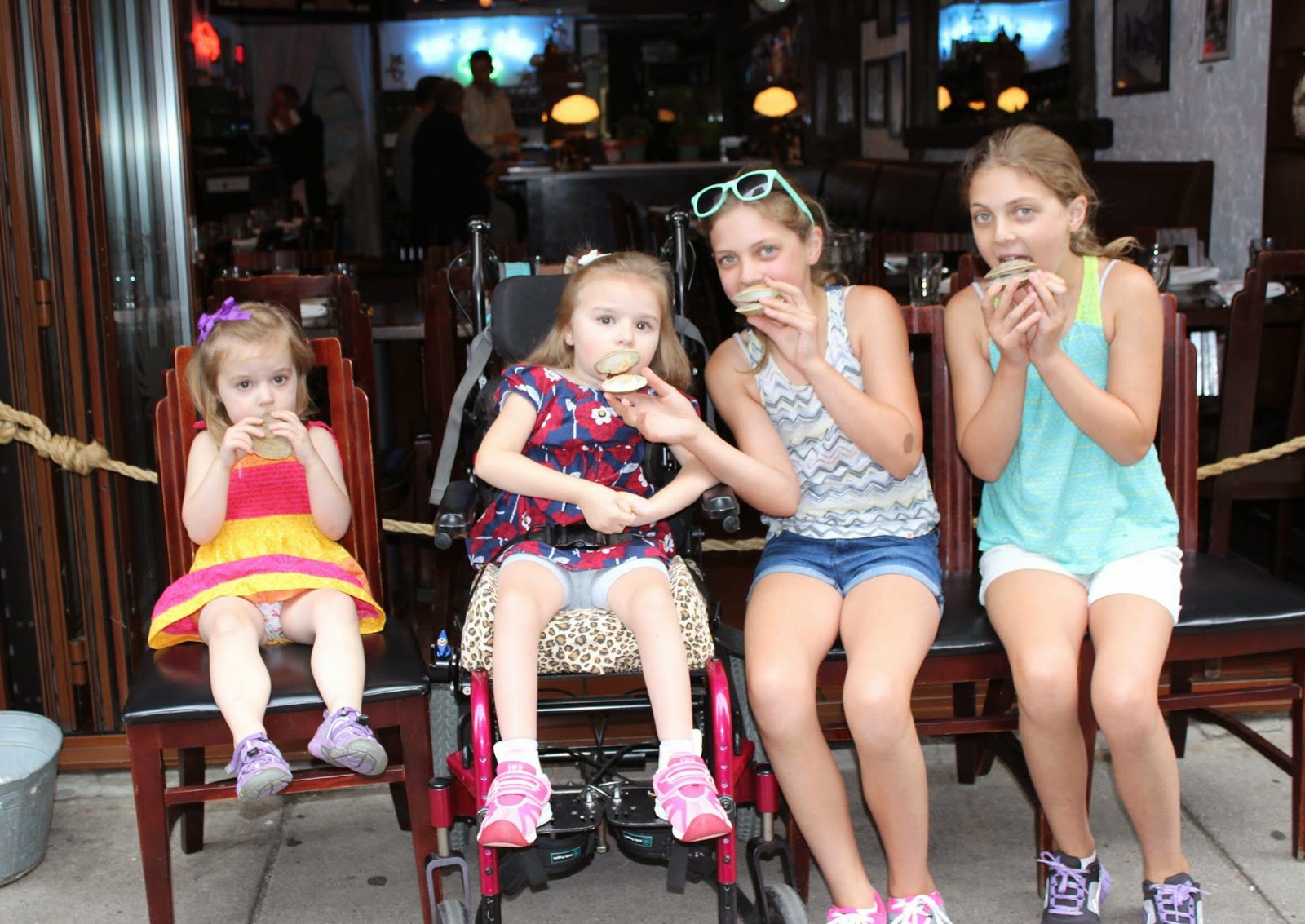 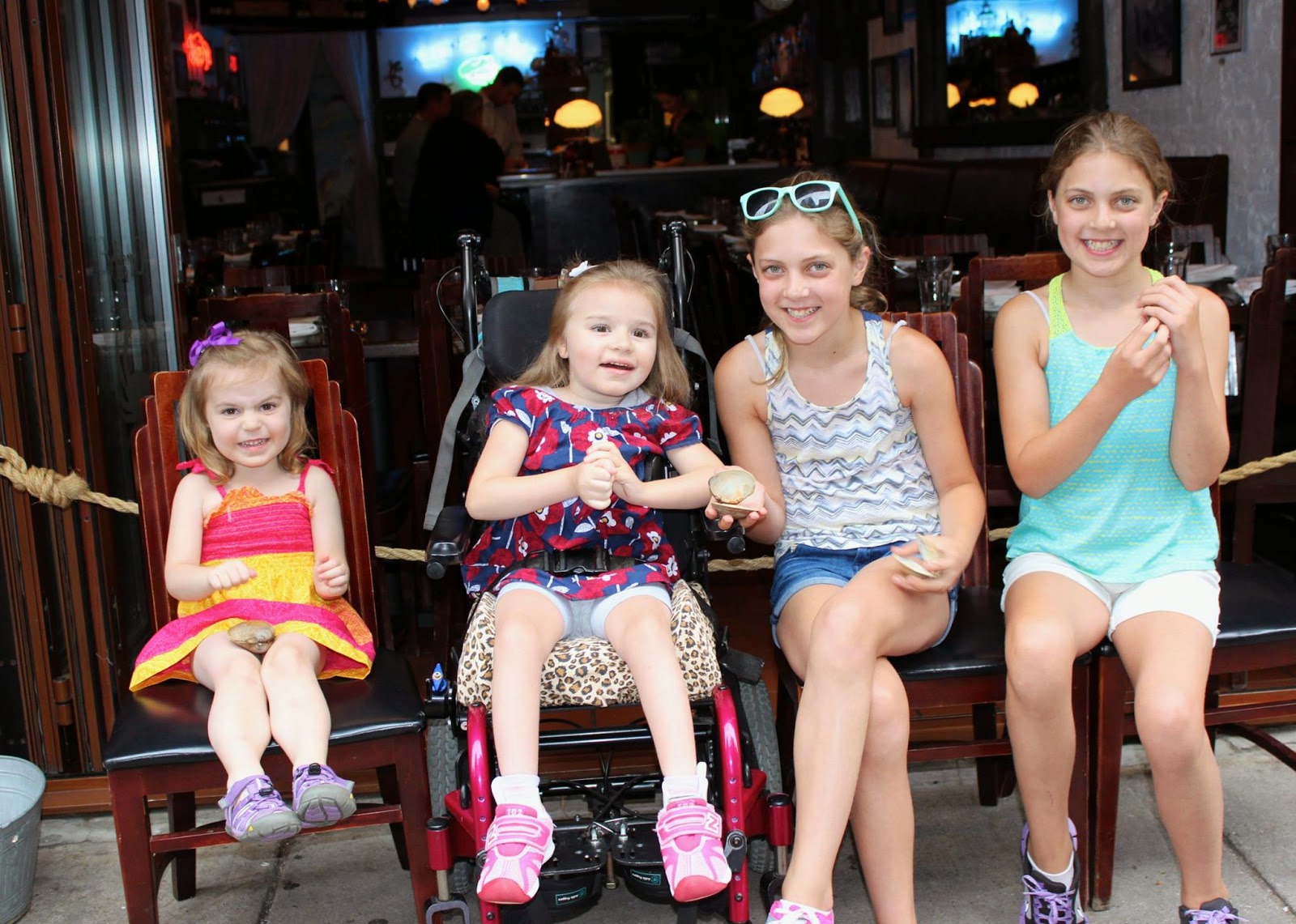 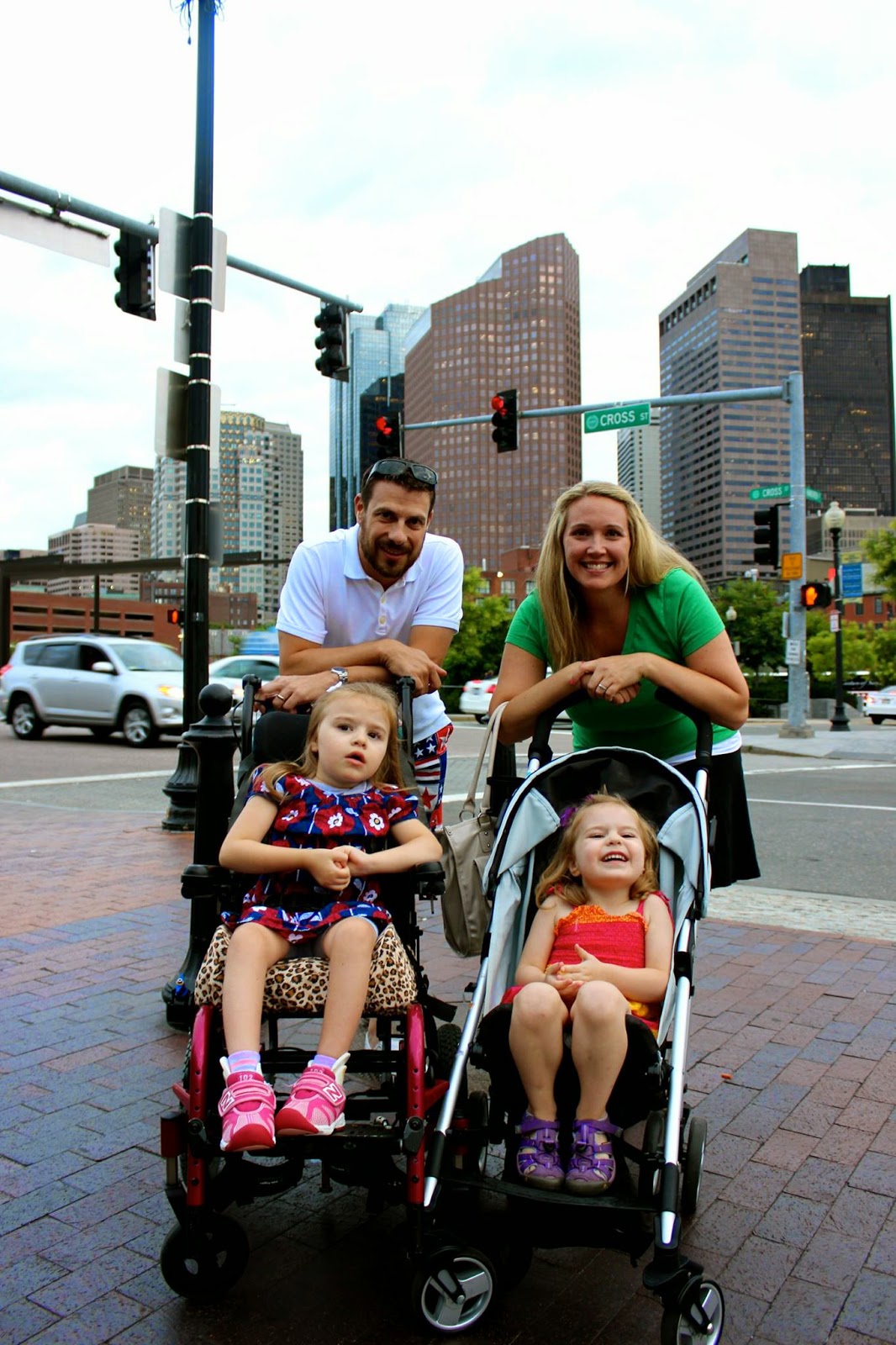 This is where the #3SetsOfSisters sign off.  I think we would make for a fun reality show.  There are not many combinations of sisters in a family that could get along this well for a week straight :) 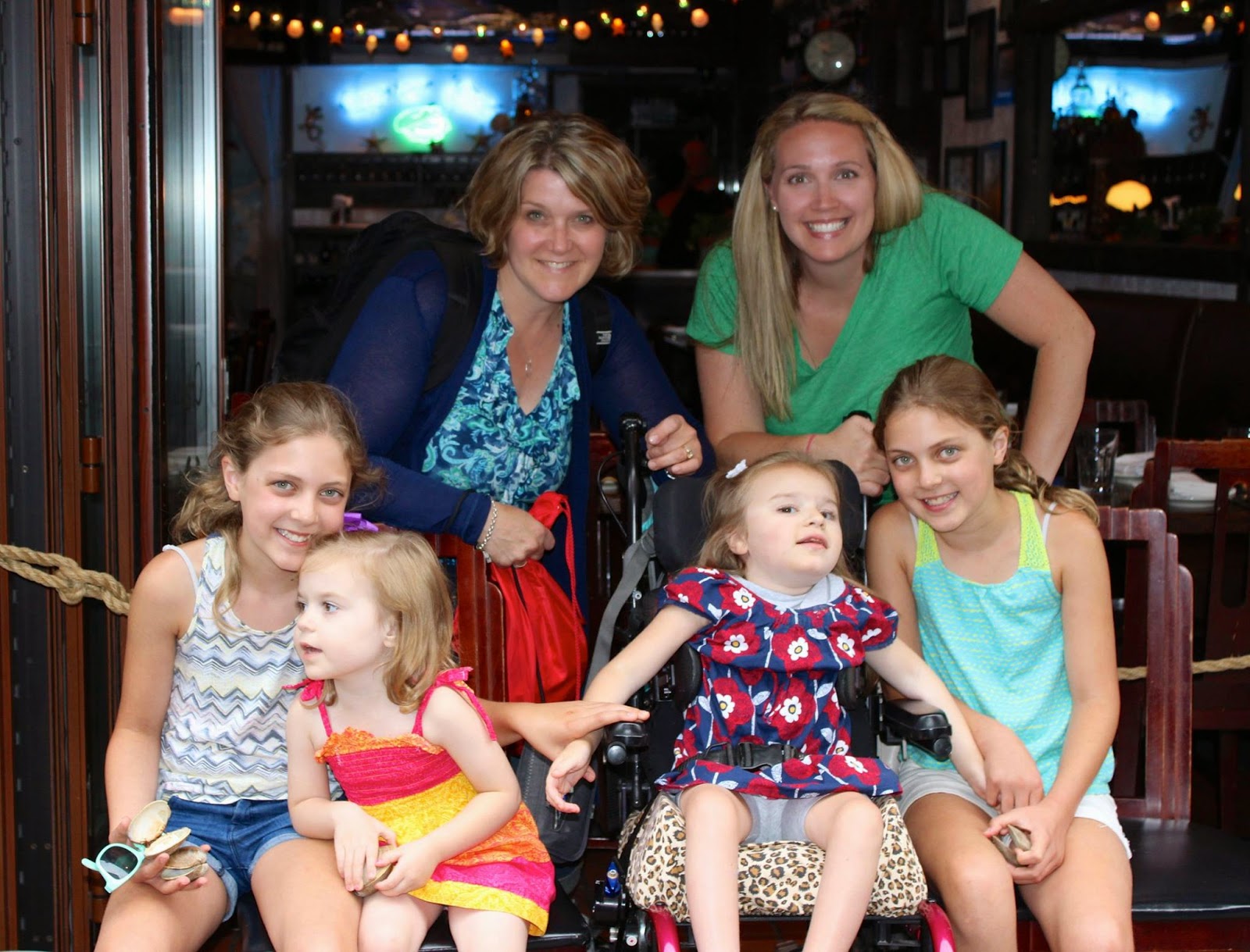 We got back to our room to find a surprise room service dessert sent to Cammy and Ryan. This hotel has taken such wonderful care of us. 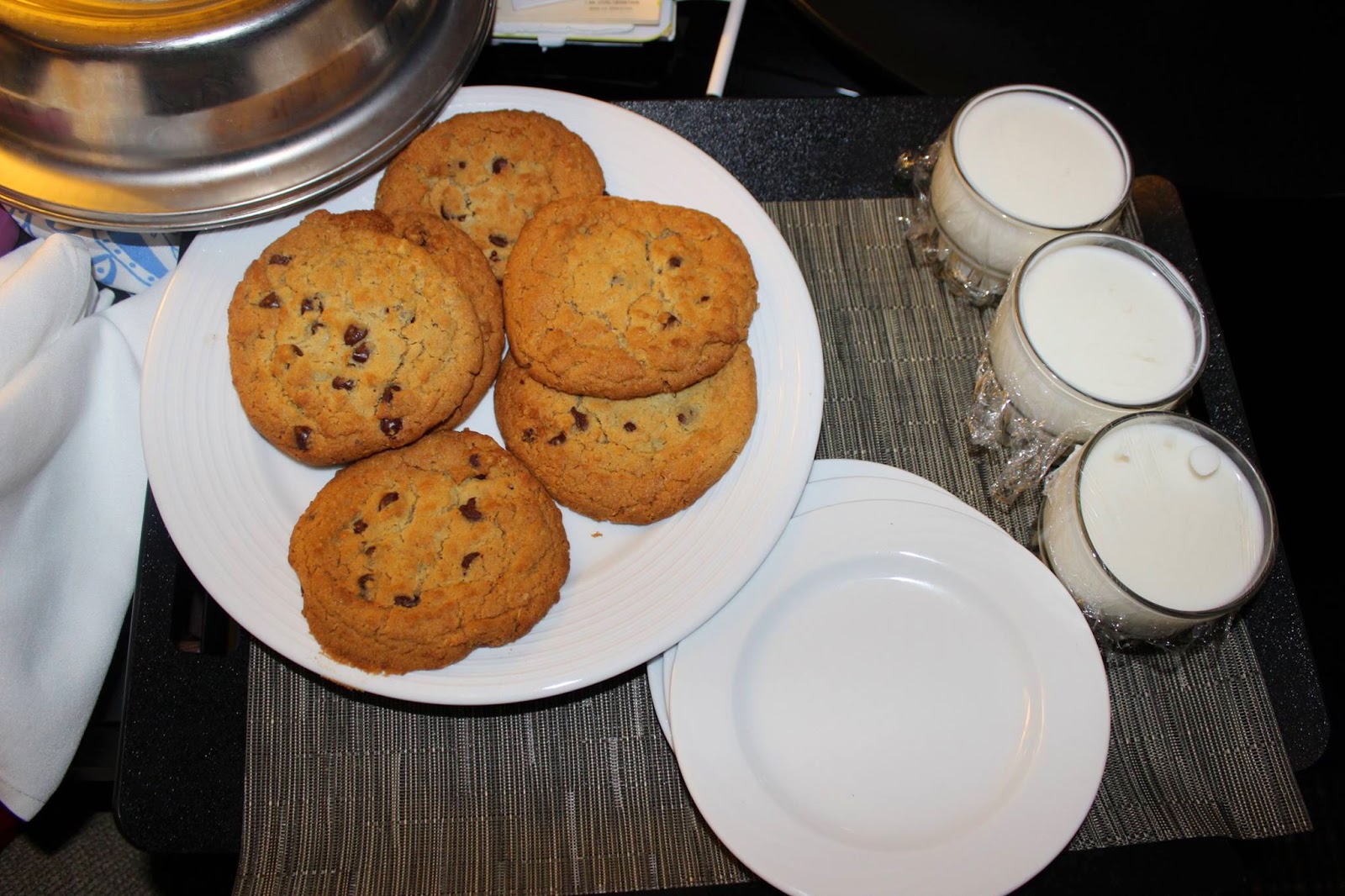